As I estimated last week, the Treasury needed more cash than originally scheduled, or originally forecast by the TBAC. It announced a big cash management bill on Monday, and another one on Thursday to be auctioned next week. That should be enough for now, but revenues appear to be going off a cliff, with declines in withholding taxes now at the point where withholding is down year to year in real terms. That’s after being up strongly in May. It suggests that the US “conomy” entered recession over the past couple of months. Meanwhile, while the evidence suggests that the conomy has already been in recession, mainstream conomist pundits continue to argue about whether the conomy will have a double dip or not. While they are trying to figure it out, the damage to the financial markets is fait accompli, and will get worse.

Month to date excise taxes as of August 31 were down by 10%, compared with virtually unchanged at the end of July. Part of this was due to the temporary expiration of the aviation excise tax from July 23 to August 5, when it was reinstated. Since the tax was again being collected since August 7, most of the decline in the tax does appear to be due to less driving, drinking, smoking, air travel, and firearms purchases, in other words, all the fun stuff, among other things. The data suggests that the economy fell off a cliff in August. 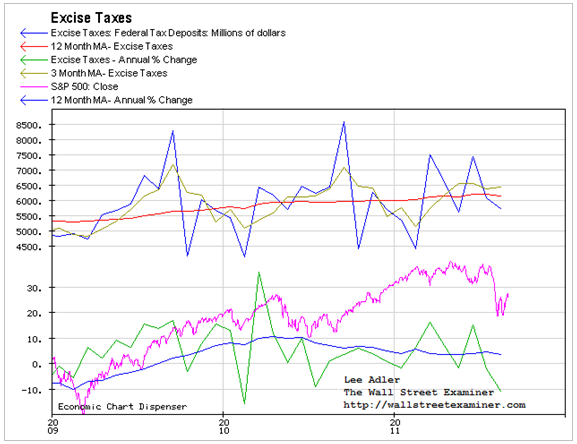 Corporate taxes were down 23%, month to date versus last year. This is a sharp deterioration from the year to year change at the end of July when it was only down 17%. Because these are estimations based on the most recent quarterly activity, they suggest weakening economic activity. However, we must note that July and August are not months when quarterly taxes are due. The last big collection month was June. September is the next. 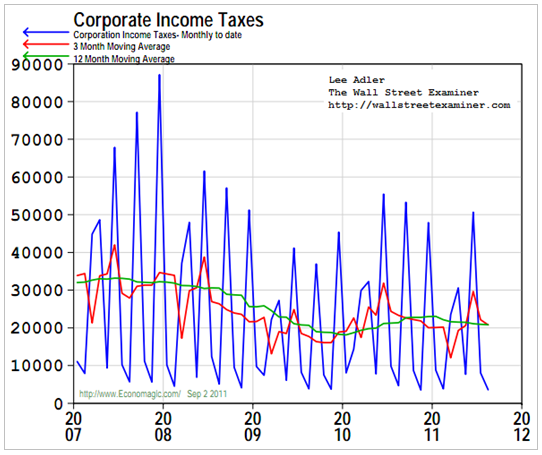 This is scandalous considering the outsized corporate profit reports. We have a serious problem of corporate undertaxation in the US, and an even bigger perceptual problem thanks to the politicians who call for no new taxes on “job creators.” The problem with that little rhetorical flourish is that the truth is that they are job destroyers and job exporters. If they are creating jobs, they certainly are not in the US.

[Soundtrack: Wake Me Up When September Ends.]