The Fed's Plan - Rumors of News

Go back a week to an article in the NY Times (Link). The guts of this story is that the Administration is working on a plan to Re-Fi residential mortgages on a massive scale.

When I first read this, I ignored it. The scope of the proposal was too large. There was also (IMHO) a fatal flaw. The thinking was that the jumbo ReFi would be made available to only those who had a mortgage that ended up with either Fannie or Freddie. I ask the question, "What about those poor odds and sods who have a mortgage with a community bank?” Do they get nothing while those who owe F/F big bucks get a break? Where is the fairness in that result?

But every day since the NYT story, I have heard the rumblings about some deal being done. It has already impacted MBS spreads. It's back in the news today with an article in the WSJ. (Link) I have to believe that where there is smoke, there is probably some fire.

I went back to the NYT piece. There are some clues. First is that Louise Story wrote the article. She is a fine reporter. Anything that she says has been supported by “real” sources. "Who were these sources?" is a question to ask. Some words from the piece:

Administration officials said on Wednesday that they were weighing a range of proposals.

Read this to mean that people in the Administration deliberately planted this story. This was a “trail balloon” approach. This is very typical for this administration. They leak their intentions in advance. More from the NYT:

But refinancing could have far greater breadth, saving homeowners, by one estimate, $85 billion a year.

The following chart was included in the NYTs article. 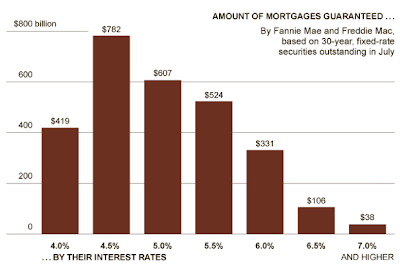 The information in the chart and the very precise estimate of “85 billion a year” can only have come from one source. It has to be the FHFA that is doing the talking to the NYT. It had to come from the most senior level. That HAS to mean that it came from the Acting Director, Edward DeMarco.

The NYT functionally confirmed the source of the article as DeMarco with this written quote from him:

“F.H.F.A. remains open to all ideas that provide needed assistance to borrowers” while minimizing the cost to taxpayers, Mr. DeMarco said in a written statement.

Now consider some of the wording in the WSJ article today. Note: This article was written, in part, by Jon Hilsenrath. Jon is well known to be a mouthpiece for the Fed. He gets his thinking directly from Bernanke. Some quotes:

There are several reasons why refinancing has been weak, say Fed officials.

Some Fed officials say that it would be in Fannie and Freddie's financial interest to allow borrowers who are current on their mortgages to refinance at lower rates because it would increase the likelihood that they won't default.

Officials at the Federal Reserve are frustrated that they've pushed interest rates to the lowest levels in decades and yet many borrowers haven't been able to take advantage.

You can take these quotes to the bank. They are from Bernanke. It is Bernanke that is frustrated that his low interest rate policy has not resulted in more ReFi’s. You can also take as a fact that Bernanke wants something done on mortgage relief.

One other fact in the picture. The new IMF head, Christine Lagarde, spoke on the phone to Obama before her speech at Jackson Hole. She must have told the Big O that a program to clear up America’s mortgage mess was her top priority. She made that very clear in her speech the following day.

Okay. Put these pieces together. What do you have? Assume for the sake of discussion that the President does announce a major new initiative to ReFi F/F mortgages. Assume further that the cost of the millions of ReFi’s would come from existing sources (the $35b of already issued and funded Hope Now Bonds), or better yet, the costs would be crammed down the neck of the banks who are servicing the loans (necessary to get DeMarco to go along). Say, for the sake of discussion, that the targeted mortgages are those who have not yet defaulted, but are desperately in need of a break. That amount would come to about $1.4 Trillion. This is a very big amount. Assume finally that the new mortgage rate would be about 4%. This (if accomplished) would be a very big shot in the arm for the economy as a whole.

Now do a flow of funds for this mega transaction.

II) The servicing banks get the proceeds and pay off the old loan.

III) The money is paid to F/F. This money is used to redeem existing mortgage pools of Agency MBS.

IV) Fannie/Freddie have the same asset mix at the end of the day. They still need to finance the new 4% mortgages they are writing.

V) Fannie and Freddie are taking on substantial new risk as they now have a book of 4% mortgages and are much more at risk to rising interest rates.

VI) It takes 90 days for a new mortgage to become a new Agency MBS. During this period F/F warehouse these loans. They finance the warehouse with short-term debt. They take action to reduce their risk by entering into new swap transactions or by buying derivatives to neutralize the market risk.

VII) As the process goes on huge chunks of EXISTING higher coupon MBS are prepaid. Investors in those MBS securities will be forced to re-invest the proceeds.

So who is going to be the biggest recipient of the cash pre-pays? That’s easy to answer. It’s the Federal Reserve. They currently own 1.0 Trillion of Agency MBS. A very substantial portion of the total prepayments of F/F MBS will be paid to the Fed. The Fed’s balance sheet will shrink very rapidly as a result.

The Fed has already established what will happen when principal is prepaid on their holdings of MBS. The have said they will reinvest any proceeds back into new purchases of US Treasury securities. As this chart of the Fed’s holdings show, this has already happened to the tune of $250 billion. The new proposal for the mega ReFi will dramatically reduce the MBS holdings. It will force the Fed back into the market to purchase big amounts of Treasury bonds. This process will take at least a year. But the total amounts could easily exceed $600 billion (QE2 size). 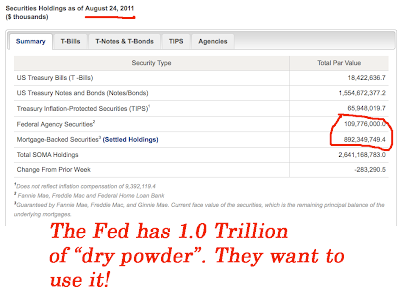 There is a flaw in this logic. On a macro basis, total mortgages loans remain the same. This is only a re-pricing. Not a reduction of total debt. The reality is that the Fed will be buying more treasury bonds, but F/F will have to be selling new bonds to protect themselves against interest rate risk. What will be happening is that the Fed is buying to reduce interest rates while at the same time F/F will be buying protection in the form of swaps, options and new term funding. So the real consequence to the credit markets will be a wash.

There is one solution to this dilemma that achieves the desired outcome. The Fed could easily enter into the swaps/options with F/F to eliminate their basis risk. Think of this as a different version of “Operation Twist”. The Fed wants to reduce long-term interest rates. It does not matter to them if they do it with direct purchase of bonds or if they absorb future interest rate risk by writing derivatives that would neutralize the market impact.

The Fed can’t write $1 trillion of interest rate swaps to the street in order to achieve this objective. There would be far too much counter-party risk for the Fed to do this. But they have no counter party risk with F/F. At the end of the day F/F is the government, so the Fed can say they have no counter-party concerns. The bulk of this would be financed by F/F in short-term markets. The swaps and options with the Fed would alleviate the market risk they would face from the ReFi’s.

Who would be AGAINST this plan? No one that I can think of. DeMarco would be able to say that the plan protects the taxpayers from future losses. Obama would say that he has created a new stimulus of $85 billion a year. Bernanke would love this plan. He would be “Forced” into buying a new big amount of Treasuries. He would have his excuse for QE3 handed to him. That the Fed would be forced to absorb new risk of loss to rising interest rates is of no concern to the Fed. They are in so deep today, another $1 trillion of notional risk would not change the picture. Keep in mind that the Fed is very anxious to pull the next trigger.

The only voice of dissent will come from Republicans in the House. But it is very likely that this could all happen without a vote. From the NYT piece:

The idea is appealing because it would not necessarily require Congressional action.

There are too many pieces of this pie to ignore. This is a solution to problems that are both political and economic. I see no significant opposition. Republicans will scream “foul”, but who cares. This can happen over their objections.

I'm looking for something along these lines to be announced soon. It will come in the President’s upcoming speech. None other than Ben Bernanke will be the biggest supporter. That makes it a very feasible outcome.


Will this work? I’m not convinced. I think this is the ultimate "kick the can down the road". But that is the only strategy that is in place today. Delay the inevitable; win the next election. That is the only thing that matters in D.C.
.
. 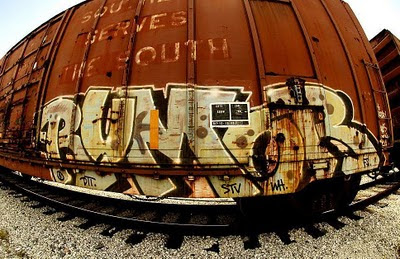 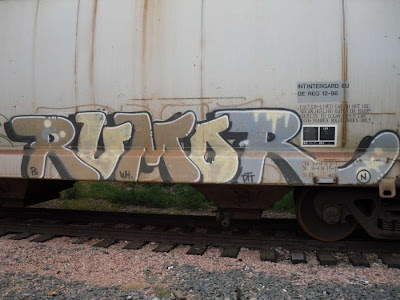 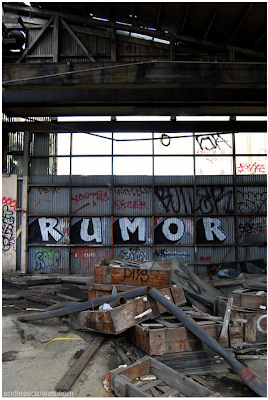