A couple of data points reported today marked a tick and a tock on the housing market clock. The Mortgage Bankers Association Mortgage Applications Index release was weak but not explosive. The FHFA (Federal Housing Finance Agency) monthly data on home sale prices was up, but meaningless.

The FHFA data is after the fact price data using paired sales of properties previously financed through Fannie and Freddie, which recently resold and were again financed by them. Given the lag in the reported data, the FHFA data is slightly more useful than the Case Shiller data, which suffers from use of moving average smoothing, but less timely than the NAR data, which has validity issues, and even less timely than real time listings data.

FHFA reported that sales prices in June were up 1.4% from May. That's very nice, but that was June, and this is late August, and we already know from more timely listings data (see Housingtracker.net) that prices probably peaked in July, as they normally do each year.

We also know from more than 5 years of historical data that while listing prices are typically about 10% above selling prices, they appear to accurately reflect the direction of the trend and changes in trend. Their biggest advantage is that they are available in real time. The other advantage is that the aggregated listings data is not smoothed, seasonally adjusted, or massaged by an organization that may have motive to make the numbers look better than they really are. It is simply an independent compilation of raw, individual listings data available publicly and updated daily on the internet through the NAR's website.

Applying simple trendline analysis, and considering the fact that the usual seasonal peak is now behind us, we can see that the downtrend in house prices has yet to be broken. The next significant point will be this winter when prices normally hit their seasonal nadir. If prices in January hold above last January's level, then we'd have a basis for calling a potential bottom in housing prices. However, a higher low would not be sufficient for a change in trend. Prices must break the downtrend line, and make a higher seasonal high before we can be confident that the lows are behind us. 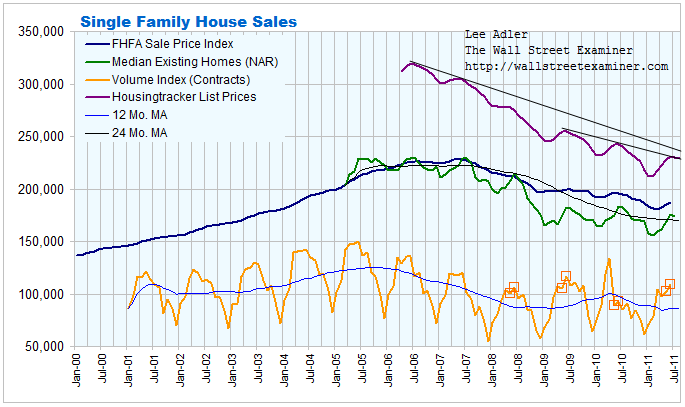 The other data released today that's also useful because it is so timely is the weekly purchase applications data from the Mortgage Bankers Association. On a seasonally adjusted basis, which is the only thing that the MBAA reports publicly, the index reached a record low for the week ended August 19. In actuality, applications were well above the record low, but about 7.3% below the levels of August 19 a year ago. To that extent, it was a record low for this date. 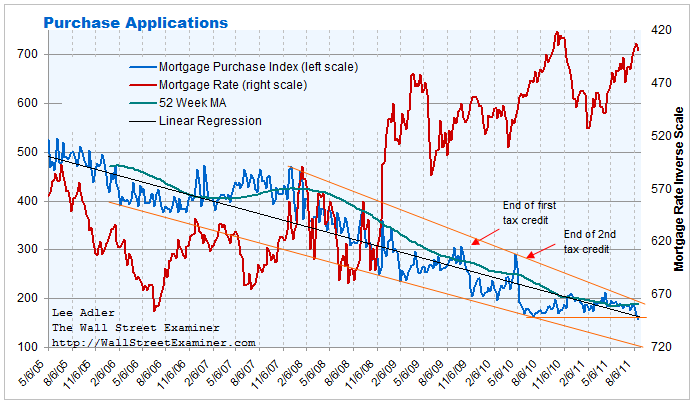 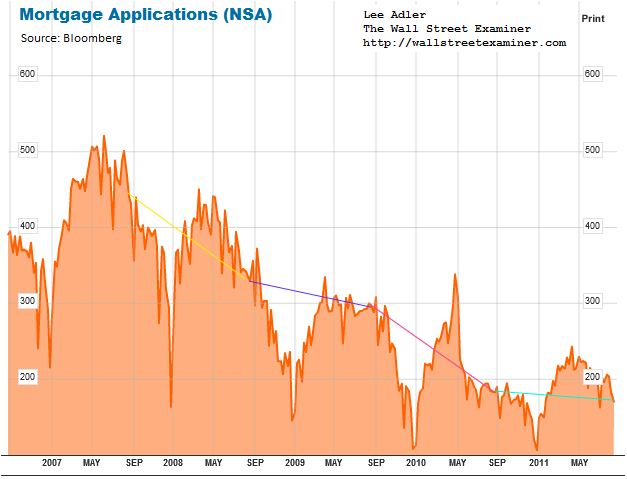 The actual, not seasonally adjusted, data suggests that the momentum of declining sales has leveled off. However, in order for the oversupply in distressed markets to be absorbed, that's not enough. Sales must increase. That is largely dependent on household formation, which in turn is dependent on growth in full time jobs. And that's not happening.

I connect the dots of all of the key housing and related economic data in the Wall St. Examiner Professional Edition. An understanding of the US housing market is important not because the industry is important to the US economy, although that's part of it. It is especially important because the financial system is so dependent on housing collateral, which neither the banks, nor the government owned GSEs, nor the Fed with its trillion dollar MBS portfolio, have even begun to mark down to market. They extend, pretend, and hope prices turn up before it's too late. This is a time bomb that without a housing recovery, will keep right on ticking.