The equity markets ‘shit the bed’ today. US investors got tattooed for $2 trillion of market cap. And this was supposed to be a good day. Talk about, “Sell on the news.”

There are three things on the plate this afternoon which are much more important than stocks and PMs. I see them as being (I) the Yen, (II) the Swiss Franc and (the mother of them all) (III) Liquidity. I’ll take these three in order.

For argument sake we are at record lows in the USDYEN. The last time we saw this was in March after the earthquake. In response to that market instability the key central banks intervened in the market to weaken the Yen. IT'S UNLIKELY THAT WILL BE REPEATED.

Yes, I would expect the BOJ to step in one evening soon and push the Yen crosses around for a few hours. IT WILL NOT WORK IF JAPAN INTERVENES ALONE. Its quite possible that the BOJ action (when it comes) will have the reverse (and perverse) consequence of attracting additional dollar sellers.

Japan is already (functionally) in a recession. The move in the currency is adding to the deflation. It is happening very fast. Without global cooperation there is not a damn thing the Japanese can do about it (possibly buy a week or two at best).

The Swiss are in a similar position. Their currency is at record levels against both the Euro and the dollar. Who is bitching about this? Answer: Everyone.

Yes, I repeated bankers and farmers a few times. But trust me they count much more than the others. As a result of the very rapid run up in the CHF Switzerland is looking at deflation.

The one thing that the Swiss National Bank has said is that they would “resist deflationary forces”. Well they’ve got those forces in spades as of today. They also have the banks leaning on them hard.

The SNB is powerless to resist the currency markets. They are much smaller than the BOJ and we know the Japanese can’t control the markets. The SNB knows this all to well. They got their faces beat to pieces the last time they tried. There appears to be no options.

Much more troubling than the currency moves is a developing problem in money markets. There are liquidity considerations that are impacting traditional funding sources including money market funds, the repo market (all asset classes), currency funding markets, Libor markets etc.

Morgan Stanley wrote about this today. I will use their charts to make a point. 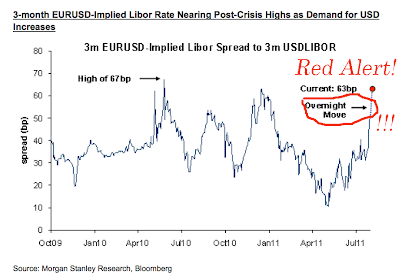 Look at the spike in three-month money through the currency swaps. We are highs not seen in some time; it is happening fast. But this is the chart that scares me: 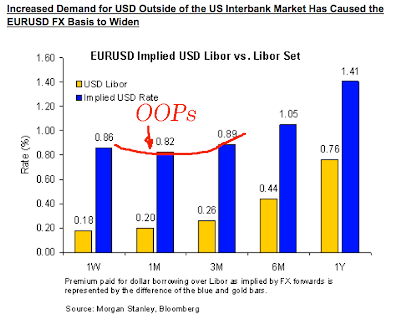 Money is very expensive via the swaps market. Note that one-week money is now inverted to one-month money. You don’t ever want to see an inverted curve in these markets. In street talk:

The short end is tight.

Depending on the severity and duration of this condition, we have a problem. This one trumps them all if it gets out of hand.

These three market conditions have one common denominator. They would all require a coordinated global response to reverse. The Fed by itself can’t solve the problem in the Euro funding zone. The ECB is trapped with a problem that is getting out hand by the day. It is also true that the required condition for global intervention, DISORDERLY MARKETS, has been met.

The biggest issue behind this is that money got taken off the table and put in the mattress of (treasury securities and cash (I did it myself)) over the past few weeks. The stupid debt limit fiasco caused all that money to move to the sidelines. So the past can be explained. But what about the future?

As of tomorrow morning these conditions have to reverse. If the dollar takes another leg down AND the funding markets weaken further there will be some very worried central bankers around the world. The most worried of them all is the one who has the most to lose. That would be Ben Bernanke. I’m sure he will be looking at the swaps market and calling around to check conditions first thing tomorrow. I wouldn’t be at all surprised if there are not some urgent messages on his desk from other CB heads when he gets to work.

We are not so far from a tipping point (again) where markets could get out of hand. Given that, there has to be some serious thinking of what might happen next. The deciders are talking as I write. They know what I do and much more. Either sentiment and funding conditions change significantly by Friday or there will be talk of something “brewing” over the weekend.

What option is open and easy at this point? The only option is global coordinated intervention. In a matter of weeks $300 - 500 billion could be injected into the system. (400b Yen 100b CHF). The Yen carry trade would reopen and this would directly address the global funding considerations. It would be very sloppy, but it would also be effective (short-term).

If the funding issue gets more acute in the next few days it will make the MSM (finally). That sets us up for a very crazy week and a very confusing Friday. All eyes on the swaps.


Note: If you think this is all nuts then tell me the name of one central banker (who has a say in the outcome) who would not jump at the chance. They could all address their individual problems and at the same not take any individual responsibility. That’s every central banker’s dream. 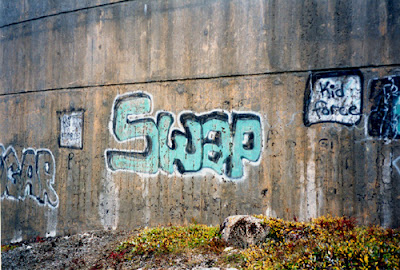