Retail Sales Reports Give Me Gas

It just doesn't get any more bullish than today's retail sales report. Or so you would think if you only read the mainstream media reports. "More spending at online stores such as Amazon and electronics and applicance stores boosted retail sales by 0.5% in October, following a strong 1.1% surge in September," shouted Marketwatch. "Retail sales rose more than projected in October as American shoppers gave the economy a boost at the start of the fourth quarter, "enthused Bloomberg. The Wall Street Journal was a little less effusive: "U.S. retail sales rose in October as Americans spent their dollars at electronics stores and on the Internet."

The stories noted that the data beat economists' expectations. Since economists' tend to beat, miss, or get the number right on a seemingly random basis, I don't know why anyone still cares. Someone should put together the data on how often they get it right, and then ask the question, "Tell me again why we are paying these people."  I haven't heard of any university economics departments or Wall Street brokerages, nor certainly any financial infomercial media organizations, lining up to do that research and write that report. The last thing they're interested in is in exposing the shills who butter their bread. As for why I don't do it, that's a project for another day.

The real story on this month's retail sales number isn't quite as bright as the captive media reports suggest. As always, they report just the seasonally adjusted, made up number. I like to start with the actual, not manufactured "impressionistic" number reported in the media. The government reports it, but mainstream "reporters" don't bother with it. Actual sales were up 1.1% from September and 6.7% versus last October.

Will someone please explain to me how an actual year to year gain of 6.7% translates to a seasonally adjusted year to year gain of 7.2%. They should be the same. The comparison is of two periods at the exact some point in the year. The impact of seasonal smoothing should be zero. Somehow, the application of seasonal fictionalization causes the annual rate of change to grow too. How cool is that!

October is normally stronger than September, so the fact that it had a gain is unremarkable. The question is one of magnitude. In order to gauge whether this October was really a good month, we need to compare it to years past. Last year's October gain was 2.9%. October 2009 was even better with a gain of 4.4%. October 2008, when the US economy and financial markets were going into a tailspin saw a drop of 0.2%. October 2007, just at the threshold of recession, had a gain of 4.2%.

Once gasoline sales are backed out, the net sales result is adjusted by the change in CPI, suddenly that 6.7% year over year gain gets a whole lot smaller, dropping to 1.75%. That's down sharply from a year to year gain of 3.2% in September and 3.5% in August. Not only are October sales ho-hum at best, they represent deceleration in growth from the two previous months. 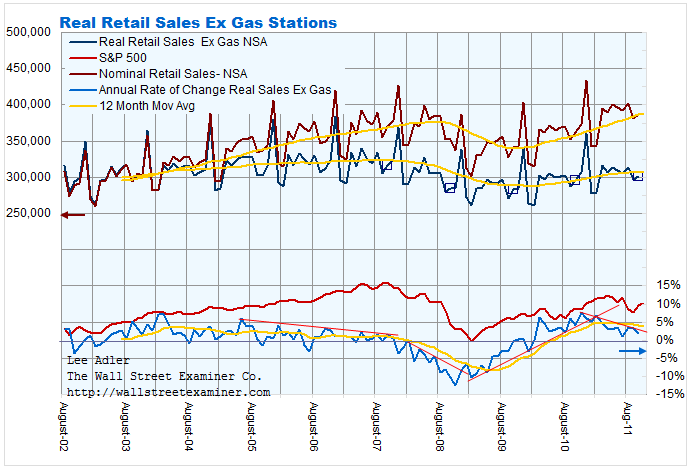 This chart shows clearly just how weak the real growth of retail sales have been. While the nominal number has blown past the October levels at the retail sales peak in 2007, the inflation adjusted numbers ex gasoline sales remain 5% below the peak levels. The nominal numbers make it look like the economy is making progress, when the reality is that for the past year its progress has been marginal. At the same time, the US population has grown by an estimated 3% since October 2007, according to the Census Bureau. Also over that period foreigners taking advantage of the cheaper US dollar came flooding into the US on shopping excursions. Even with growing population and increasing retail tourism real sales ex gasoline are down by 5% in 4 year. That certainly is nothing to get excited about, especially considering the weakening of the growth rate throughout 2011.

The bulls want you to see the glass as half full and rising. Not only is it half empty, but it appears to be draining at an accelerating rate. What does this mean for investors? There's been a leading relationship between the annual growth rate of real retail sales ex gas and the direction of stock prices. Although that rate hasn't turned negative, as it has slowed this year, stock prices have tended to follow, as they have in the past decade. If the trend doesn't reverse soon, the growth rate will drop into negative territory and stock prices would probably fall.

The growth rate of this series would need to recover and stabilize somewhere north of 3% for it to be a solidly bullish indication for stock prices. A lot is riding on this Christmas shopping season. A fall in gas prices might give retail sales and stock prices the boost that's needed to keep the bulls in business. A rise in gas prices could be the kiss of death. The recent persistence of the uptrend in crude oil prices over the past 2 months is not a good omen.

Get regular updates on the US housing market, and stay up to date with the machinations of the Fed, Treasury, Primary Dealers and foreign central banks in the US market, in the Fed Report in the Professional Edition, Money Liquidity, and Real Estate Package. Get the research and analysis you need to understand these critical forces…stay ahead of the herd. Click this link to try WSE’s Professional Edition risk free for 30 days!