As we noted in Stock World Weekly, the Baltic Dry Index, a benchmark indicator for global economic activity (an index of global freight rates for shipping dry commodities, e.g., metals, coal and grain), has been in free-fall since the beginning of the year and has analysts buzzing about whether the decline in the index was reflecting a precipitous drop in demand, or an unusual oversupply of shipping capacity. The index is down from its 12-month high of 2173 in October - now in the low 700s.

"A quirky canary-in-the-coal-mine indicator for global economic activity is in freefall, but market experts can’t agree on whether it’s a sign of danger or an accident of recent history on the high seas.

"The Baltic Dry Index – an index of global freight rates for shipping dry commodities such as iron ore, coal and grain – had fallen for 23 consecutive days as of last Friday, cutting its value in half in the space of a month. The last time the index was this low, the world was in the depths of a credit crisis and a major recession. (Baltic Dry Index springs a leak)" 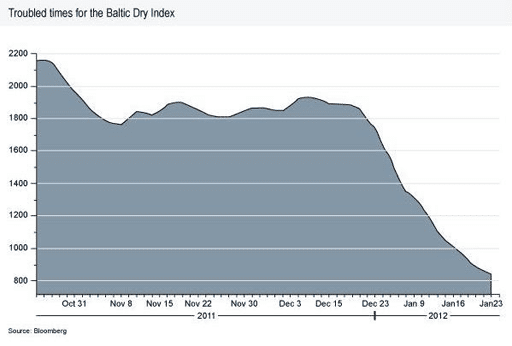 In Russ Winter's view, the problem is two-fold - a drop in demand and oversupply of shipping capacity. Here's his take on the situation. ~ Ilene

In 2008 the markets got very worked up with what at the time I was relentless calling a China commodity bubble.  A search under the term “China Bubble” from Winter Watch turns up 75 articles mostly in 2007-2008 and also in 2011.

A bubble can be defined as speculative activity not well related to the real economy, in short, a maladjustment. One of the consequences of this was the ramp up of shipping construction to feed the China boom.  When commodities came back in late 2009-2011, shipping construction surged forward unchecked. Now with China rolling over, the shipping that was produced during this period is increasingly lined up and stacked in Asian harbors around the world. Shipping rates have collapsed, another event which the markets continue to largely ignore.

I have been feeling for some time that this would bite the players involved. Although the shipping company stocks have become very depressed of late, the story as it relates to shipping lenders has been relatively overlooked. Now the IHT is out quoting industry observers stating that European banks may be facing write-downs on these loans on the order of $100 billion, which is even more than their Greek losses.

At my Actionable site I am now recommending a bearish strategy using a big poorly capitalized European bank that is not only exposed to European sovereign debt, but also to the double impact of inflated commodity lending in general. The market thinks LTRO, I think multiple lending blowups in tandem.  In addition to shipping, I am including shale nat gas, which is also maladjusted. Natural Gas was discussed separately on Jan. 23 in the “Natural Gas in Maladjusted Feast and Famine Mode” report.