Solyndra – Moving forward to what?

The Solyndra (“S”) story has dropped out of sight. I wonder if this is a result of an absence of “new news” to report about, or a very successful effort to keep it out of the MSM. Maybe a bit of both.

The story will come back to the front pages on 9/14. That is the date that has been set for the House Energy and Commerce hearing that will look into S and the DOE connection. It can be safely assumed that some tough questions will be asked, I think they will be adroitly ducked. The cast of characters: 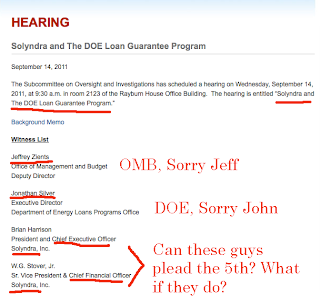 Of interest to me is that there are no witnesses scheduled for the principal owner, Argonaut Ventures (George Kaiser family investment vehicle). One would think that it might be informative to talk with the investors. Ah, well.
.

The DIP document (BK loan) has been filed with the court. No surprises. Argonaut will provide the dough. This is a $4mm loan. The terms are very clear. This money is only available to facilitate a very rapid 363 sale. (Standard BK process).

If the Judge says, “Yes” to the DIP (he has to have a reason why not to) S will go up for sale. It won’t take long once the process starts.

This raises the question of, “What’s S worth?” I admit that I don’t have a clue.

Inventory and accounts receivable were sold in July (To, guess who? Argonaut of course!). The company has facilities in two locations. They have a product, but they haven’t figured out how to make money at it. That can’t be worth a hell of a lot.

The one asset they might have is a Net Operating Loss. A big one at that; at least $500mm. This is tricky stuff. NOLs are subject to IRS rules (#382-Look it up if you want to get dizzy), so I asked a BK Attorney who has been assisting me for some color:

Using post bk NOLs to shelter profits from existing businesses is one of those things that is hard to pin down an answer to. Technically, you aren't supposed to be able to - IRS frowns on it. But good attorneys make 1000 an hour for a reason.

Zell has spoken quite openly about targeting bankrupt companies only for their NOLs, to shelter profits from solid companies already in his stable. There has to be a defensible continuity of business, but solar is energy, so there would be continuity in pairing it with an existing energy firm. BUT - to take advantage of 382, the sale in bk would have to be structured very carefully - so the thing to watch for is the deal being set up that way. You don't get the NOLs if you buy the assets -you only get a chance to keep them if you buy the company, and meet the pre and post ownership thresholds.

Bottom line. Only Argonaut has a chance of utilizing the tax benefits. Whether they are ultimately worth anything is not clear. But this fact does give Argonaut a potential leg up on other bidders. Keep in mind that Argonaut would not be paying cash for anything. They would just swap all of S (including the NOLs) for their otherwise worthless IOUs.

On a personal note, my connection to this got me on Tulsa Ok. radio station KFAQ the other day. Tulsa is also the home of George Kaiser. The host, Pat Campbell, said that he had reason to believe that Kaiser’s “people” would listen in. At one point it came up that Kaiser is a pillar of Tulsa. I used that chance to say: (Edited for stutters, run ons etc…(Link)

George Kaiser could step up in a bankruptcy court and offer to put $300mm into S. The proceeds would be used to substantially pay down the government IOU. The balance of the debt would be converted into common stock. If S were around in 5-7 years, the government might get the rest of its money back.

That's my challenge to George Kaiser. Step up and fix this problem.

Of course this would be the dumbest thing for Kaiser to do. I don’t think he’s dumb at all (and he has the best lawyers). I’m sure he doesn’t like losing good money after bad. That said, this isn’t one of those everyday stories. This one could swing an election. I wonder if he gave it a thought. 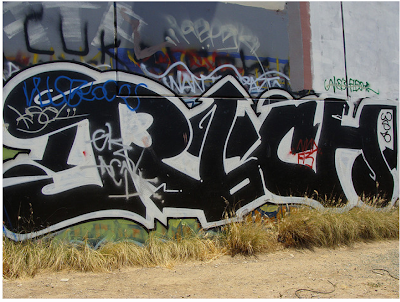