If you want to find out what happened with Solyndra you have to follow the money. I did. The half billion dollars of taxpayer dough that is probably lost in Sol came from the Federal Financing Bank (“FFB”). It’s worth a look at this bank to see what else is going on.

FFB is a bank that is owned and controlled by the US Treasury. The chairman of the Board is the TSec. (Tim Geithner). With the (big) exception of the Post Office all of the loans at FFB are guaranteed by government agencies. Technically speaking, FFB has no risks on loans guaranteed by an agency like the DOE. But I don’t think that should absolve Tim Geithner of any responsibility regarding the losses the country faces with Solyndra. If he, (or anyone else at Treasury) puts their pen to a ½ billion loan, they better well know where the taxpayers money is going. That didn’t happen.

FFB has been around for 40+ years. I believe it has always been a bank that has been used and abused by whoever happened to be running the show at Treasury. For example; from 9/30/2008 (Pre - Tim and O) to 9/30/3009 (Post - Tim and O) the FFB lent out $17.1 billion to the nice folks at the National Credit Union Administration’s “Liquidity Fund”. NCU is the guarantor of the deposits in the country’s Credit Unions (similar to FDIC). They were up against it in 2009. They had had no money left in the till to insure that those deposits would be safe. A bailout was needed to avoid a crisis. But rather than have a public debate about this, the FFB just borrowed some money and wrote a check to NCU. Problem solved.

The following are the balance sheet assets of the FFB for fiscal year end 2008 and 09. Note that there were no outstanding loans guaranteed by the DOE in 08. But a year later the number had jumped up to nearly a Bil. It was clear back then that the FFB was rapidly becoming a policy tool of the new administration. By June 30th 2011 the DOE guaranteed loans at FFB has grown to $5.2B. Clearly the Administration is (was?) using the bank to facilitate it's objectives. 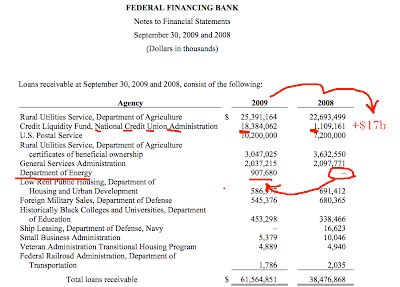 The borrowers identified as the beneficiaries of the FFB’s deep pockets include:

The names on this list are the problems to be for the DOE. (I can’t wait to find out who we are partnering up with on the I – VIII deals)

The FFB/DOE has also been lending big bucks to some well know names.

These successful companies owe the FFB a total of $3.8 billion. There is one company that I don’t recognize. But they got $35mm in May at a real fine rate: 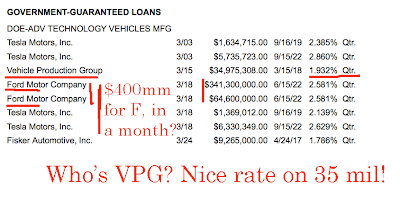 The Post Office has $12.9 large out with FFB. The PO has a debt limit of $14b. They will hit that in 2012 (and then go broke). The FFB has been funding the operating deficits at the PO for years. When O took office it was $7b. Playing, “Hide the losses at the PO” is a very old game in D.C.

The FFB also has an active role in providing the much needed lucre for Foreign Military Sales. As of June 30 there was $349mm of IOU’s. (I wonder who those “I”s are. Probably stable governments, right?) If you’re keeping score, the amount outstanding when Bush left office was 50% higher than today.

$33 billion (61% of FFB’s book) is out to Rural Electrics. It would appear that many parts of the country don’t have adequate utilities. Nor do they have the resources to fix the problems. The solution has been to lend them dirt-cheap money with functionally no maturity. This is just a silly accounting game to avoid recognizing that needed infrastructure expense(s) should have been on the budget long ago. This is a close-up of a section of the FFB report:

Note the long maturities and % rates. 35-year money for Lake Land (sounds like a nice place) at Treasuries +30. The following is a pic of all the re-financing's for May and June. I shrunk it because it would just clutter the page; it’s that long. Blow it up on your own or go to the FFB site and look up Press Releases. This goes on every month of the year. This stinks of boondoggle and pork. What are the administrative costs to oversee this? There has to be a better way. 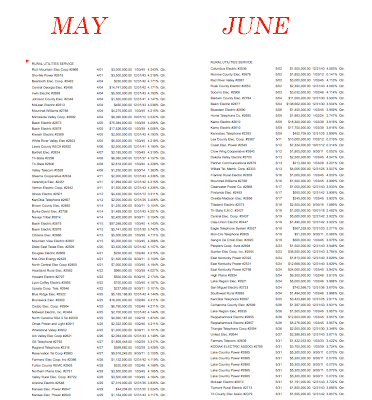 I’m all for education. We’re dead in the water without it. I think there is a role for the government to assist in this. But the FFB? Why are they making loans? Is this just another way to avoid an expense? What are these guy’s in D.C. thinking? Is everything “on the arm” down there? Again, a close up and the totals for two months. This is silly, right? 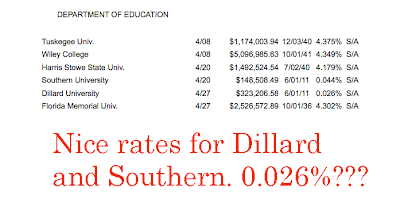 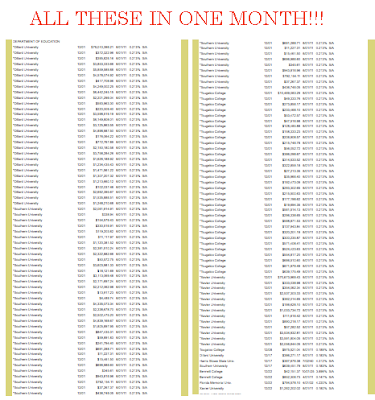 A minor bad loan is the $493mm of Hope Now Bonds. A good chunk of this is still in cash. But not for long. Treasury is going to use some of this money for the big mortgage ReFi that is in the offing. When that happens there will be no hope of repayment of the Hope Bonds.

There is one more attractive feature for the Chairman of the FFB. With the exception of the notes from the PO, it’s all off balance sheet. When the “Debt to the Penny” calculation is made by the Treasury, the (net of PO) $33b at FFB borrowings are excluded.

In Wall Street terms, that makes the FFB a SPIV and it’s a whorehouse.

Note: I've written about the FFB before. I smelled trouble with this bank. My nose was working. 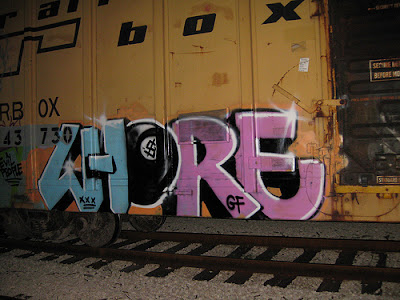