At this point, the fact that the COVID pandemic has spurred an unprecedented mental health crisis shouldn't come as a surprise to anybody. We have reported on the enormous impact on Americans' mental health repeatedly, both here and here.

Aside from the obvious physical impacts of the pandemic, mental health professionals have told CNBC that many people have continued to struggle with the immense emotional and societal changes even as some of the restrictions on business and movement have started to ease. Because of this, many fear that the psychological impact from the pandemic could last a generation.

Even as mask requirements are beginning to disappear, millions of Americans are having a difficult time adjusting to the "new normal".

One psychologist, Valentine Raiteri, who works in New York, told CNBC: "I have never been as busy in my life and I’ve never seen my colleagues as busy."

He's having a hard time referring patients because even his rival are full. "Nobody's taking new patients."

"I can’t refer people to other people because everybody is full. Nobody’s taking new patients...So I’ve never been as busy in my life, during the pandemic, and ever in my career," he said, adding that he’s also seen an influx of former patients returning to him for help.

Raiteri added that many of his patients are still working remotely and many are struggling with feelings of isolation. They are "disconnected and lost, and they just have this kind of malaise."

"That is really hard for me to do anything about," he said, noting: "I can’t make the pressures disappear. I can always treat the illness that it provokes."

Many studies have found that mental health has deteriorated by a substantial degree.

Raiteri explained that his patients' depression has largely been driven by the loss of social connection.

"There’s definitely a huge mental health impact from a long period of uncertainty and change that’s left people very isolated and not sure how to connect. Just being out in public and interacting in a very casual way with strangers or mild acquaintances, that’s very regulating, and norm-creating and reality affirming."

This has created a "big pressure cooker, especially for people who already have a vulnerability," he said.

One London-based psychologist explained that the isolation of the pandemic forced many people to confront personal issues like alcoholism.

Natalie Bodart, a London-based clinical psychologist and head of  her own practice, said that alcoholism, relationship issues, isolation and loneliness were emerging as the biggest problems facing her patients.

“Our day to day lives serve as great defense mechanisms, we have lots of distractions that help us to avoid things, for good and for ill,” she said.

But when these day-to-day distractions are gone, people have trouble coping.

"For example, we have had younger people that have come to us and said, 'now that I’m not doing my very sociable busy job anymore, I realize I’ve got a problem with alcohol.' And why is that? Well, that’s because it can’t be covered up anymore by the fact that their work demands that they socialize and drink a lot.

Or, people who have been in relationships where they don’t see that much of their partner, so it works, it functions, but then you’re stuck at home with that person and suddenly realize, actually, there’s a lot of things coming out that we just haven’t confronted or haven’t realized."

Data from Statista showed that depression has surged around the world. 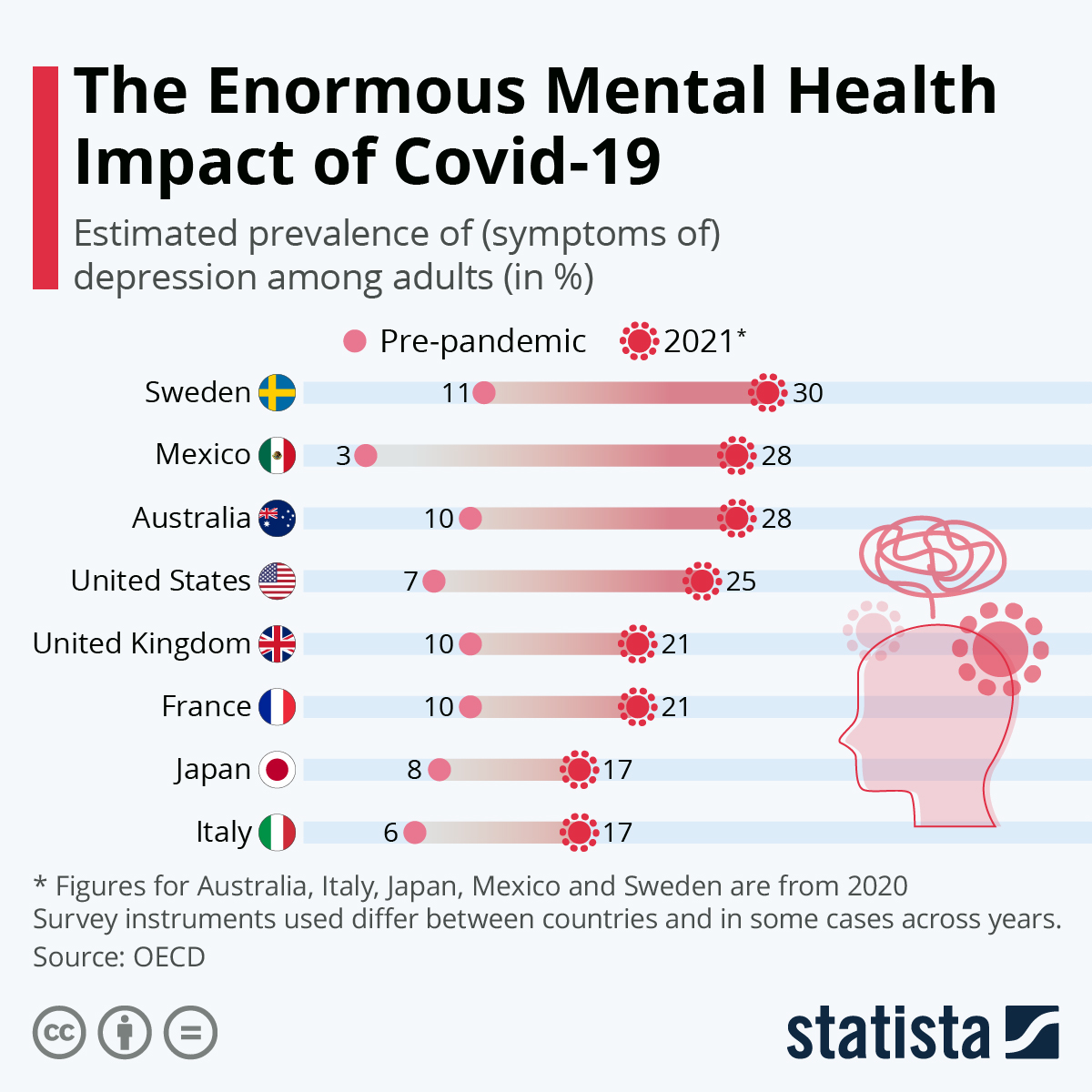 The big question now: will this start to change as the world tries to return to "normal?"