The value of Bitcoins and NFTs may have fallen over the past year, but a different approach to cryptocurrency is growing in popularity around the world while showcasing a totally different face of the blockchain.

According to the Central Bank Digital Currency Tracker by Atlantic Council, CBDCs were launched even earlier than in Nigeria in Caribbean countries, for example in the Bahamas, Grenada, Dominica and Saint Lucia. The Sand Dollar of the Bahamas was the first central bank digital currency of the world upon its launch in 2019 and cleared the way for a rapid adoption around the region’s small nations. 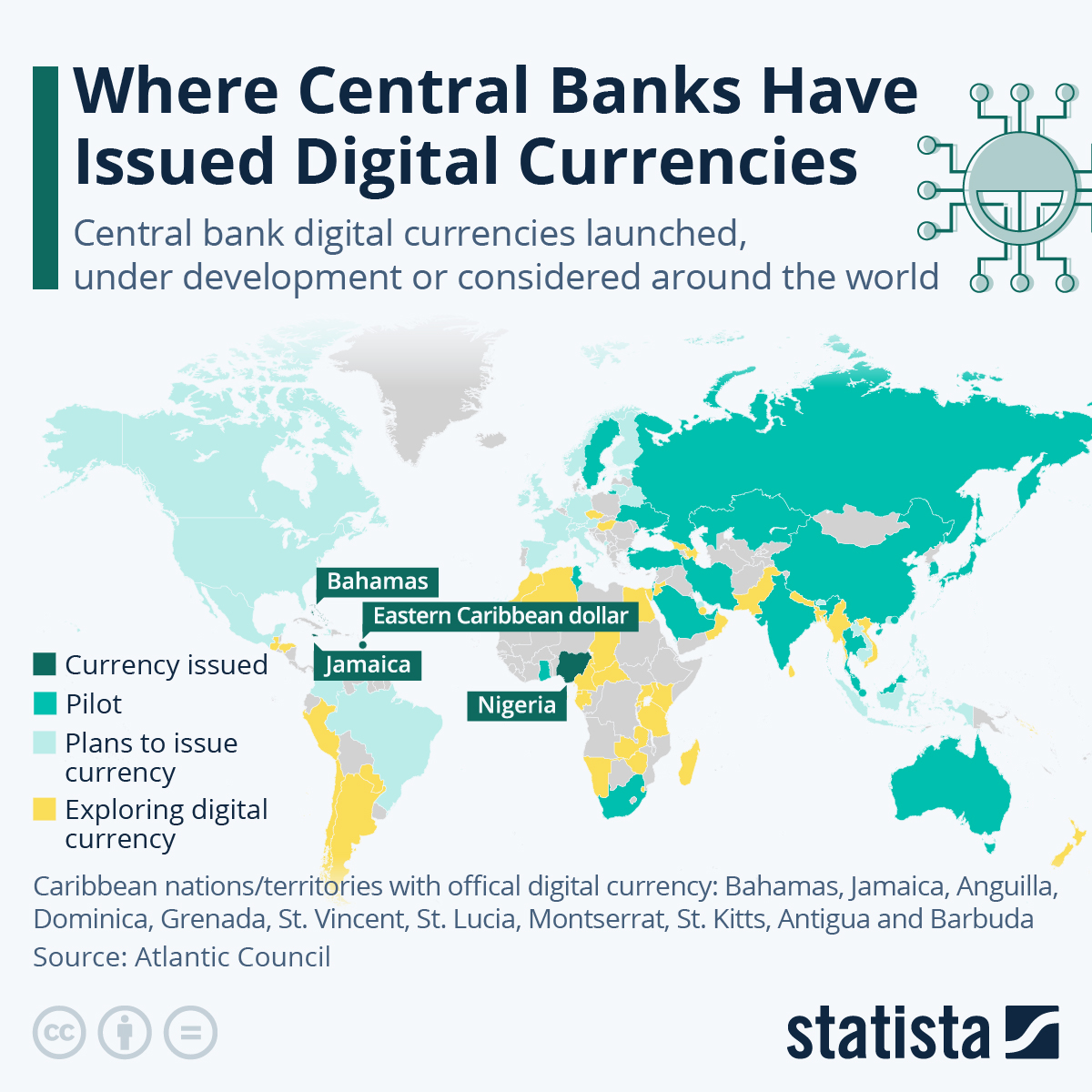 The Chinese digital Yuan pilot made headlines in April 2019, but the project has not moved on since. Like Nigeria, China has a solid digital and mobile payment infrastructure. Large parts of the two countries' populations leapfrogged card payments and went straight from cash to digital payment options, which became hugely popular - may they be app or text-based. In developing countries, central banks also consider the potential of digital currencies reaching the unbanked.

Another reason for some governments to champion official digital currencies is the collection of data. Ubiquitous digital payments and tight government surveillance have led to a plethora of payment data already available to Chinese administrators. This knowledge on how people spend money will only grow with the implementation of the digital Yuan, even though the country’s central bank has said it will limit traceability and create what it calls “controllable anonymity.”

Other countries which are in a CBDC pilot phase include Russia, Thailand, Malaysia, South Korea, Sweden, the United Arab Emirates and Saudi Arabia. It is unclear, however, which program could see a proper launch next. Concrete plans to launch a CBDC were recorded by the source in Canada, Australia, Brazil and India, among others.

The digital Euro is also in its development phase, with a pilot scheduled for 2023 in participating nations.

As Alt-Market's Brandon Smith detailed previously, with the introduction of CBDCs in the wake of a stagflationary crash, the central banks could call for a new global network of currencies to “stop such a crisis from ever happening again.” The BIS and the IMF will be ready and waiting with the SDR basket, or something very similar. The bankers will remove all physical money over a short period of time and a global digital system will take over. All privacy in trade will be gone, except for those people involved in barter, black markets and commodities.

The advent of CBDCs could also mean that money and economic participation will become privileges, not rights. Digital trade could be tied to a social credit system, much like the one that exists in communist China.

Want access to your checking and savings accounts? Better not say anything critical of the establishment, or you could be reported by a neighbor or stranger by cell phone app and have your money disappear in seconds. The onus will then be on you to prove that you are “loyal” and get access back. You are guilty until proven innocent. Maybe you don’t want to take the next untested mRNA vaccine for the next dubious pandemic threat? You’ll have little choice if your ability to function economically is controlled digitally.

This is the world we are facing if we allow central banks to fully digitize money and trade. It is a nightmare environment of complete authoritarianism. The public at large is mostly unaware of the incredible danger inherent in CBDCs and they must be educated before the current crisis grows so large that they can no longer focus on anything other than their own problems.