While majorities in England and Wales voted for Brexit, majorities in both Scotland and Northern Ireland voted against it, seriously threatening the future integrity of the United Kingdom.

And now, as Statista's Niall McCarthy notes, support for independence is now surging in Scotland and while that was rejected in a 2014 referendum, the impact of Brexit has changed the game entirely. SNP leader Nicola Sturgeon is pushing for yet another vote on Scotland's future which could look dramatically different to 2014.

A recent analysis by the London School of Economics claims that independence could be a costly proposition for Scotland.

The research claims that such a move would cost the Scottish economy £11 billion annually in the long-term with income per capita plunging 8.7 percent in a worst case scenario. 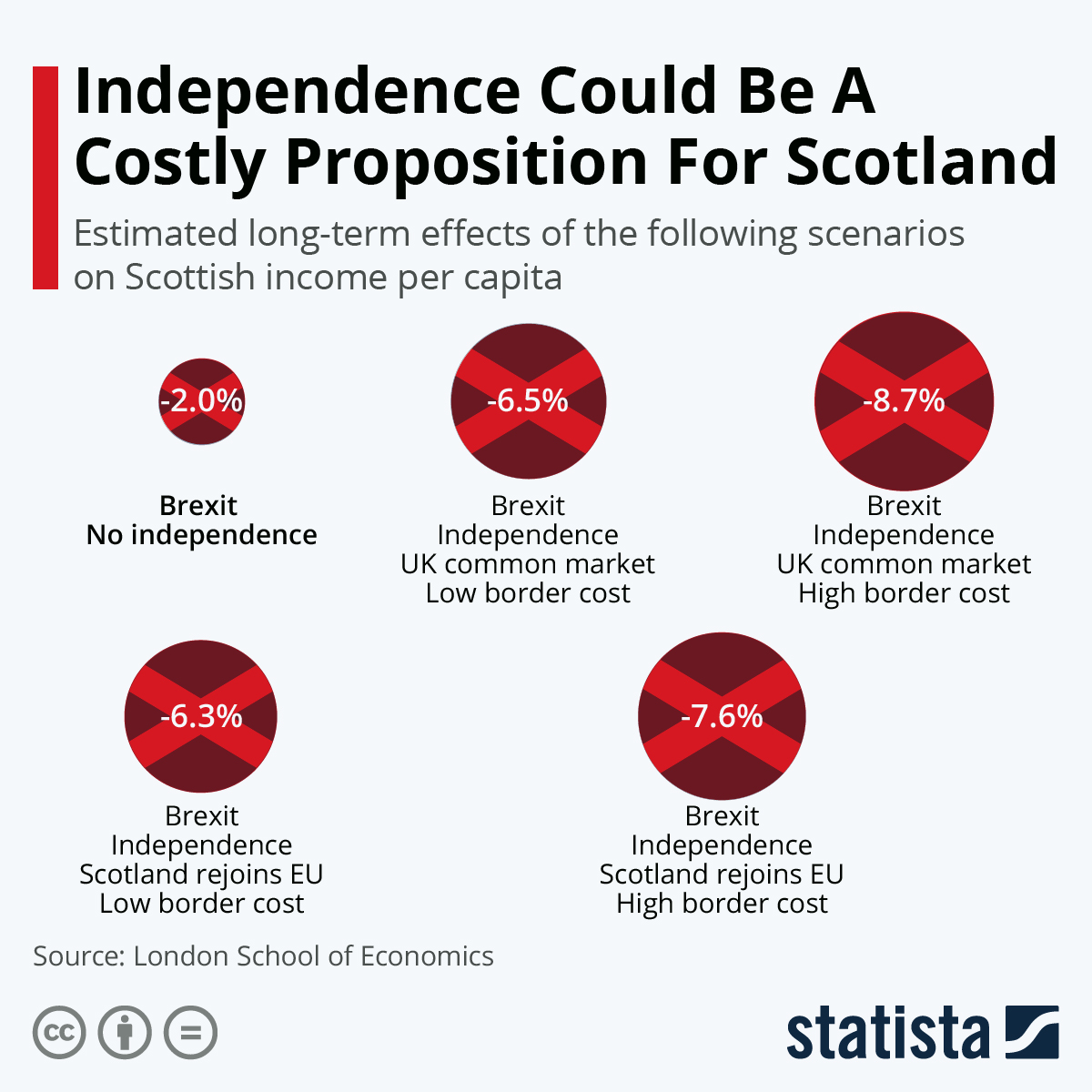 The authors of the analysis state that it only covers the impact of increasing trading costs and excludes other possible post-independence factors such as changes in inward investment and immigration.

Citing the benefits independence and EU membership brought the Irish economy, Scottish Economy Secretary Fiona Hyslop stated that such a move would be hugely advantageous for Scotland.

“In the real world, through membership of the EU, independent Ireland has dramatically reduced its trade dependence on the UK, diversifying into Europe and in the process its national income per capita has overtaken the UK’s,” she said in a quote by The Guardian.

Hyslop added that “with our economic resources and advantages, control of economic policy and membership of the EU, Scotland would be very well placed to grow the economy.”

There is a real need for a campaigning organisation for Scottish Independence which people can join and whose sole focus is attaining Independence early, as a matter of urgency. Now Scotland, of which I am an elected committee member, is being launched to fill that gap. It is not a political party, will not stand candidates and all who support Scottish Independence as an overriding political priority are welcome. It is aimed to be the mass membership organisation to which everybody in the wider Yes Movement can belong.

It is intended that it will improve on 2014’s Yes Scotland by going into the campaign with a membership, funds and a democratic structure.

Now Scotland grew out of a series of assemblies last year organised by AUOB, and the aim is to take the kind of energy and unity generated by AUOB and extend it from marching and into other areas of campaigning. But like AUOB, it is the agency and energy of the people which will drive the activity. Now Scotland is not, and will not become, top down.

All of us who believe in the Independence of Scotland need to look beyond what divides us – and it would be dishonest to fail to note divisions have been deepening. We need to concentrate on what unites us, move forward to Independence on an irresistible popular wave, and then set about building that better country of our own.