The 2020 Olympics are finally underway in Tokyo. Japan has been averaging 3,000 cases a day this week while only 22 percent of the public has been fully vaccinated.

The event is now set to take place behind closed doors which is a bitter blow for both the public and organizers after a massive amount of work and investment.

Cost overruns have become the norm for host cities and it is estimated that postponing the games by a year cost Japan $2.8 billion, two-thirds of which was paid with public funding. That has come on top of a project that is already severely overbudget. When the Japanese capital was awarded the Olympics in 2013, the bid committee projected a final bill of $7.3 billion and this was revised upwards to $12.6 billion in December 2019 before the postponement. Japan's National Audit Board later reported that the final cost would be far higher at $22 billion. Financial newspapers Nikkei and Asahi claim that the end cost of hosting the Olympics will actually amount to a whopping $28 billion.

As Statista's Niall McCarthy details, Tokyo is just the latest of a number of host cities to learn a harsh economic lesson. 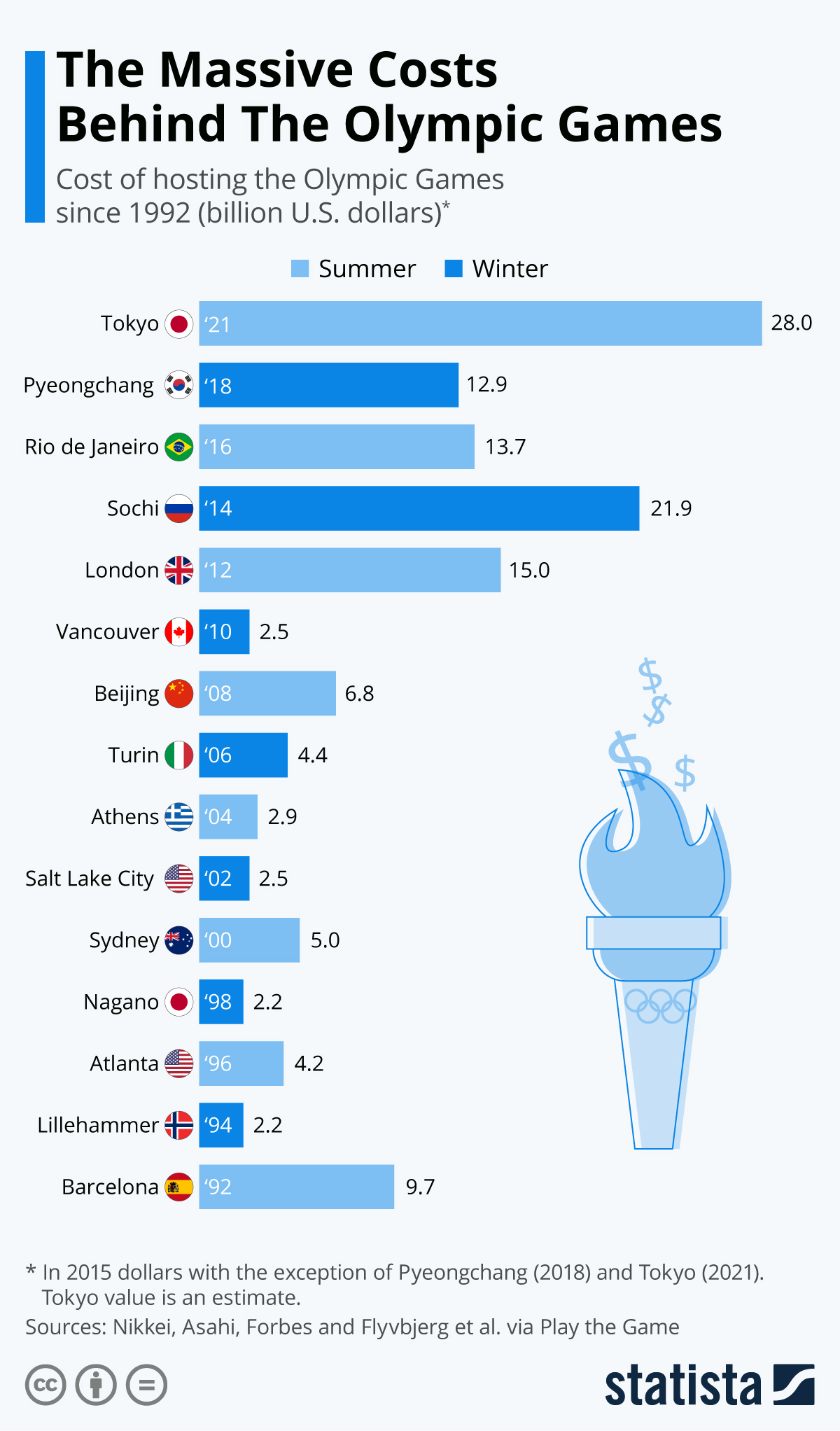 Some have taken past mistakes onboard and Hamburg is a notable example which rejected its 2015 bid on cost grounds in a public referendum. Other cities have learned that the financial consequences can be dire only after hosting the games. Research conducted by The University of Oxford in 2016 and website Play The Game shows how costs ballooned in most cities down through the years. Notable examples include Montreal in 1976 where the games were 720 percent overbudget and Barcelona in 1992 which experienced a cost overrun to the tune of 266 percent.

In recent years, the 2016 Olymics in Rio cost just under $14 billion which represented a 352 percent cost overrun while the 2012 London Olympics saw its final bill of just under $15 billion come in 76 percent overbudget. Snowballing costs are also a feature of the Winter Oympics where there have been several financial catastrophes such as Sochi. The 2014 Winter Olympics in the Russian City cost $21.89 billion, a 289 percent cost overrun largely as a result of overbudget venues.

Sadly, the enduring legacy of hosting the Olympics is now nothing more than a slew of abandoned and overgrown venues in multiple former host cities. That remains the case to this day in past venues such as Sarajevo, Athens, Beijing and Rio, to name just a few, where crumbling stadia and forgotten Olympic villages serve not as proud monuments to athletic achievement, but rather as somber symbols of catastrophic financial mismanagement.