Distracted by the 'grandness' of the collapse of China's property development market, many have missed the fact that China faces a crisis that could directly hit Asia's economy just as hard as a financial collapse - a nationwide power supply shock.

After ramping up its coal-based power production earlier in the year, it appears Beijing has suddenly grown a conscience over its emissions and the 'average joe' could be about to feel the pain of that decision.

Climate change facts: Chinese CO2 emissions are more than double those of the US, and greater than US and EU combined. pic.twitter.com/ZpJCoPaUjB

As Bloomberg reports, the crackdown on power consumption is being driven by rising demand for electricity and surging coal and gas prices as well as strict targets from Beijing to cut emissions.

It’s coming first to the country’s mammoth manufacturing industries: from aluminum smelters to textiles producers and soybean processing plants, factories are being ordered to curb activity or - in some instances - shut altogether.

"With market attention now laser-focused on Evergrande and Beijing’s unprecedented curbs on the property sector, another major supply-side shock may have been underestimated or even missed,” Nomura Holding Inc. analysts including Ting Lu warned in a note, predicting China’s economy will shrink this quarter.

As a reminder, China pollutes more than the US and all developed countries combined...

More problematic for Greta and her pals, between the years 2000 and 2020, the amount of electricity generated by burning coal increased more than four-fold in China, hitting around 4,600 terrawatt hours in the past year. 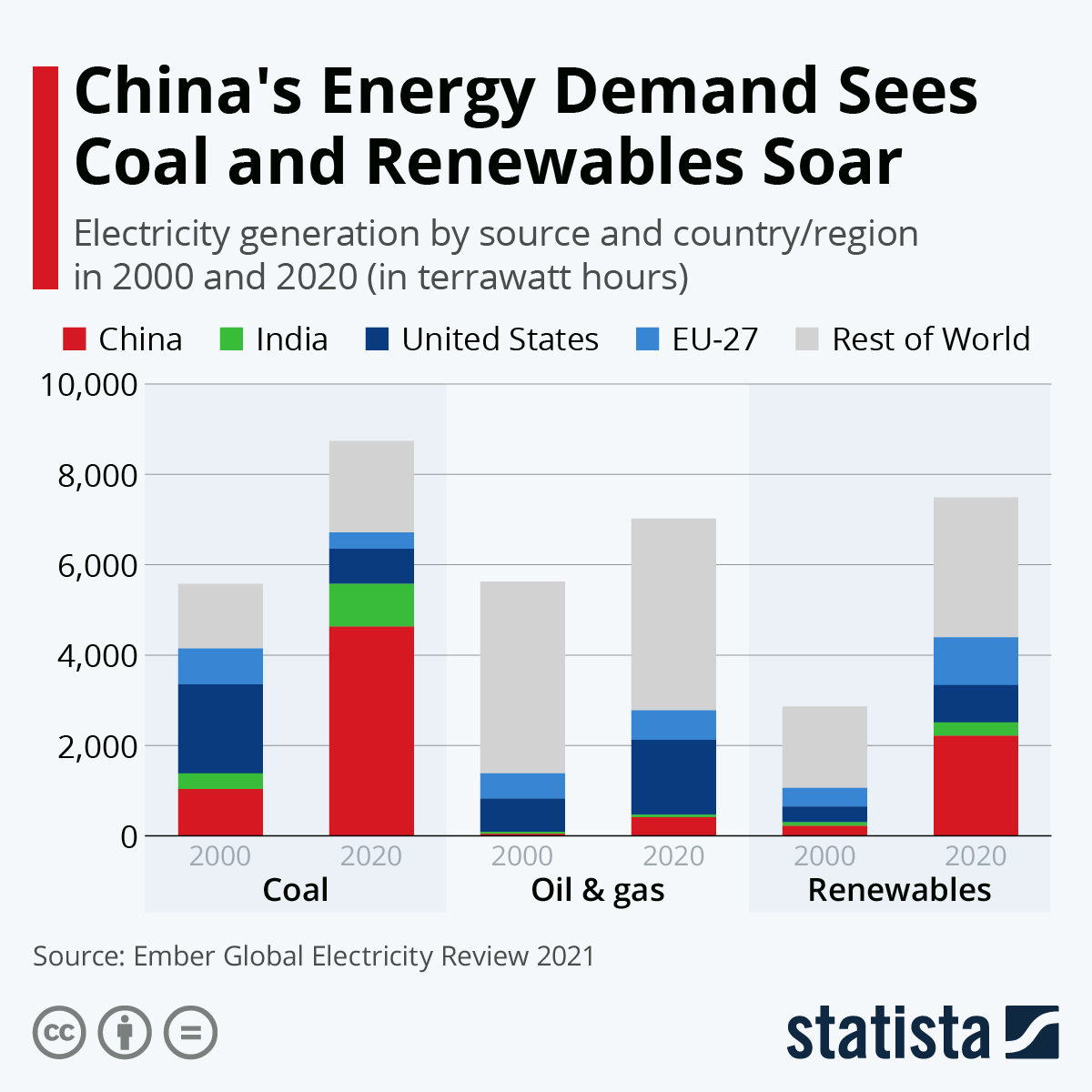 As the scene below suggests, this is not the first time China has faced winter power demand surges (which prompted many to turn to diesel generators to plug the shortages of power from the electricity grid).

However, this year is different.

The danger is that, as Zeng Hao, chief expert at consultancy Shanxi Jinzheng Energy, warns: government policies will significantly limit the energy industry’s potential to increase production to meet the demand increase.

2) The economic rebound from COVID lockdowns that has boosted demand from households and businesses (as lower investment by miners and drillers constrains production); and

3) President Xi Jinping tries to ensure blue skies at the Winter Olympics in Beijing next February (showing the international community for the first time that he's serious about de-carbonizing the economy).

Simply put, it is the third factor - which is all of its own making - that has raised the risk of a severe shortage of coal and gas - used to heat homes and power factories - this winter; and more ominously, expectations of the need to ration power to those deemed worthy.

“The power curbs will ripple through and impact global markets,” Nomura’s Ting said.

“Very soon the global markets will feel the pinch of a shortage of supply from textiles, toys to machine parts.”

As we noted earlier in the year, China needs to shutter 600 coal plants to meet its emissions goals of net zero greenhouse emissions by 2060.

If Xi's recent actions in the interests of "common prosperity" are really about forestalling social unrest, we suspect his commitment to meeting self-imposed carbon emissions targets may quickly evaporate as the Chinese people are unlikely to stand sustained black-outs for long without upheaval.