It looked like the U.S. had reached the peak of its coronavirus infections on April 24 when it experienced 36,738 new daily cases, a figure that fell to 17,618 by May 11. Back then, it looked like the U.S. had put the worst of the pandemic behind it and President Trump consistently pressed for the economy to be reopened. While testifying in front of the Senate in mid May, Dr. Anthony Fauci, the top U.S. infectious disease expert, cautioned against reopening too early, stating that the virus could spiral out of control resulting in increased suffering and death as well as a setback on the road to economic recovery.

On June 26, the U.S. reported 45,300 new daily infections and at least 16 states have either paused of backtracked on reopening their economies. And as Statista's Niall McCarthy notes, the push to reopen led to a debate about whether it was better to to save lives and incur economic damage or press on with reopening without taking precautions to keep people safe.

Most countries around the world adopted the former strategy with Italy, Spain, France and Germany among those waiting until the infection rate dropped substantially so that effective testing, contact tracing and isolation strategies could be implemented. All of those countries are now reaping the benefits of that approach, opening up their economies in time for the busy summer holiday season. 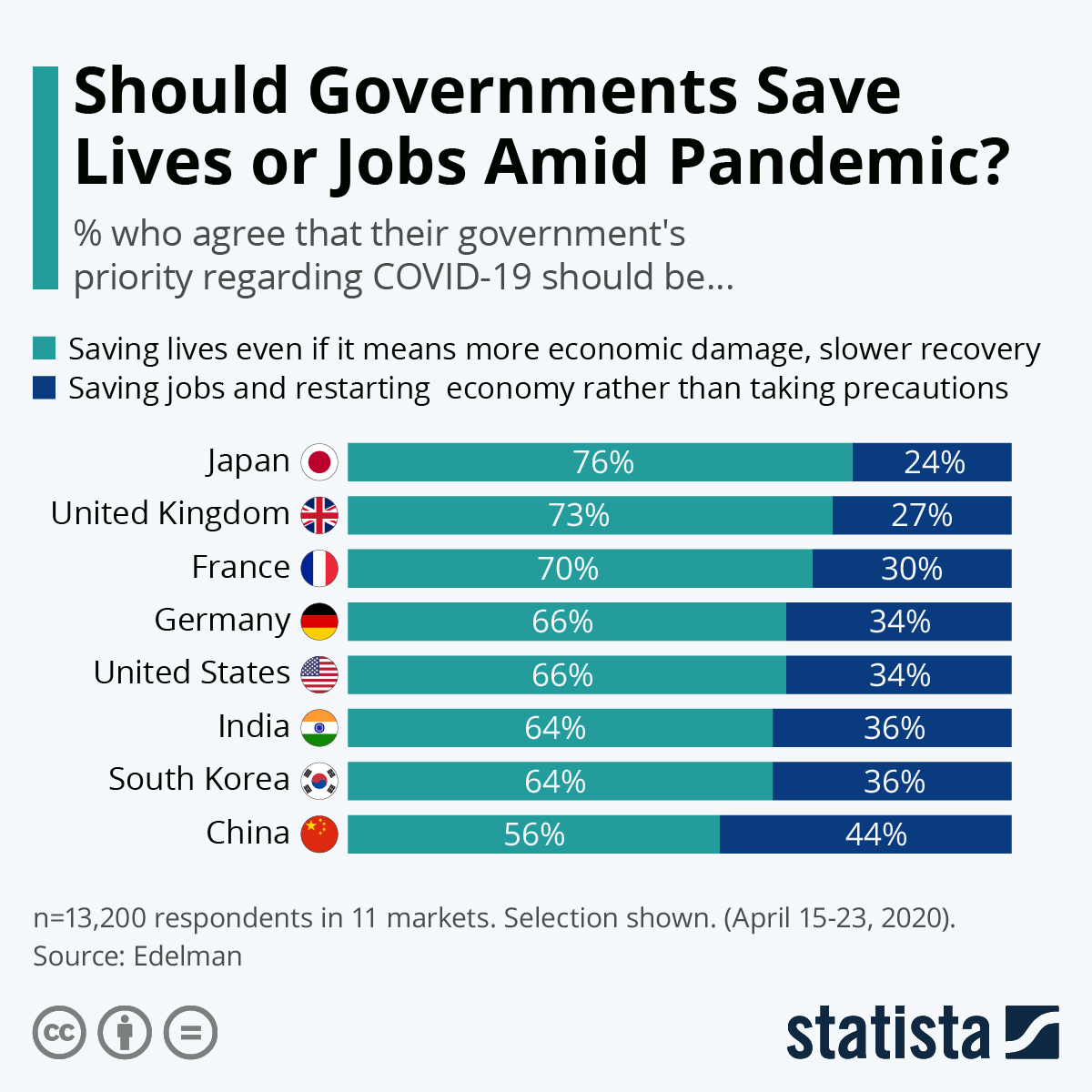 Edelman analyzed public attitudes to both approaches in a Spring Update to their Trust Barometer. Out of the 13,200 respondents polled across 11 countries, 67 percent agreed that the government should save as many lives as possible, even if it means the economy will sustain more damage and recover more slowly. 33 percent of respondents said it is becoming more important for the government to save jobs and restart the economy than to take every precaution possible to keep people safe from the virus.

On a country-by-country basis, Japan had the highest proportion of people valuing lives over economic recovery at 76 percent. Elsewhere, 66 percent of Americans say that saving lives should be the government's priority while 34 percent think the government should focus on saving jobs.

In China, where the coronavirus intitially took hold, 56 percent of respondents said the authorities should focus on saving people while 44 percent want the economy reopened, regardless of the impact on citizens.