Following an official visit of U.S. Speaker of the House of Representatives Nancy Pelosi to Taiwan, relations between the island state known as the Republic of China and its direct neighbor, the People's Republic of China, have cooled considerably.

Apart from an increasing number of military exercises off the coast of Taiwan stoking fears of an escalation of the long-running conflict, the People's Republic also has, to a certain extent, halted trade with Taiwan.

While an import ban on certain Taiwanese fruits and fish is unlikely to become a source of global tensions, China's export stop on sand, a resource essential for the manufacturing of semiconductors, could prove devastating for countries like the United States.

As Statista's Florian Zandt shows in the chart below, based on UN Comtrade data, 62 percent of the United States' total trade volume with Taiwan came from imports from the island state in 2021. A majority of these goods fall into the IT and electronics sector, with companies like Apple, Qualcomm and NVIDIA relying on chips manufactured in the large-scale semiconductor foundries of Taiwan. Next to the war in Ukraine and the impact of the coronavirus pandemic, China's sand ban could become another exacerbating factor to the ongoing chip shortage. 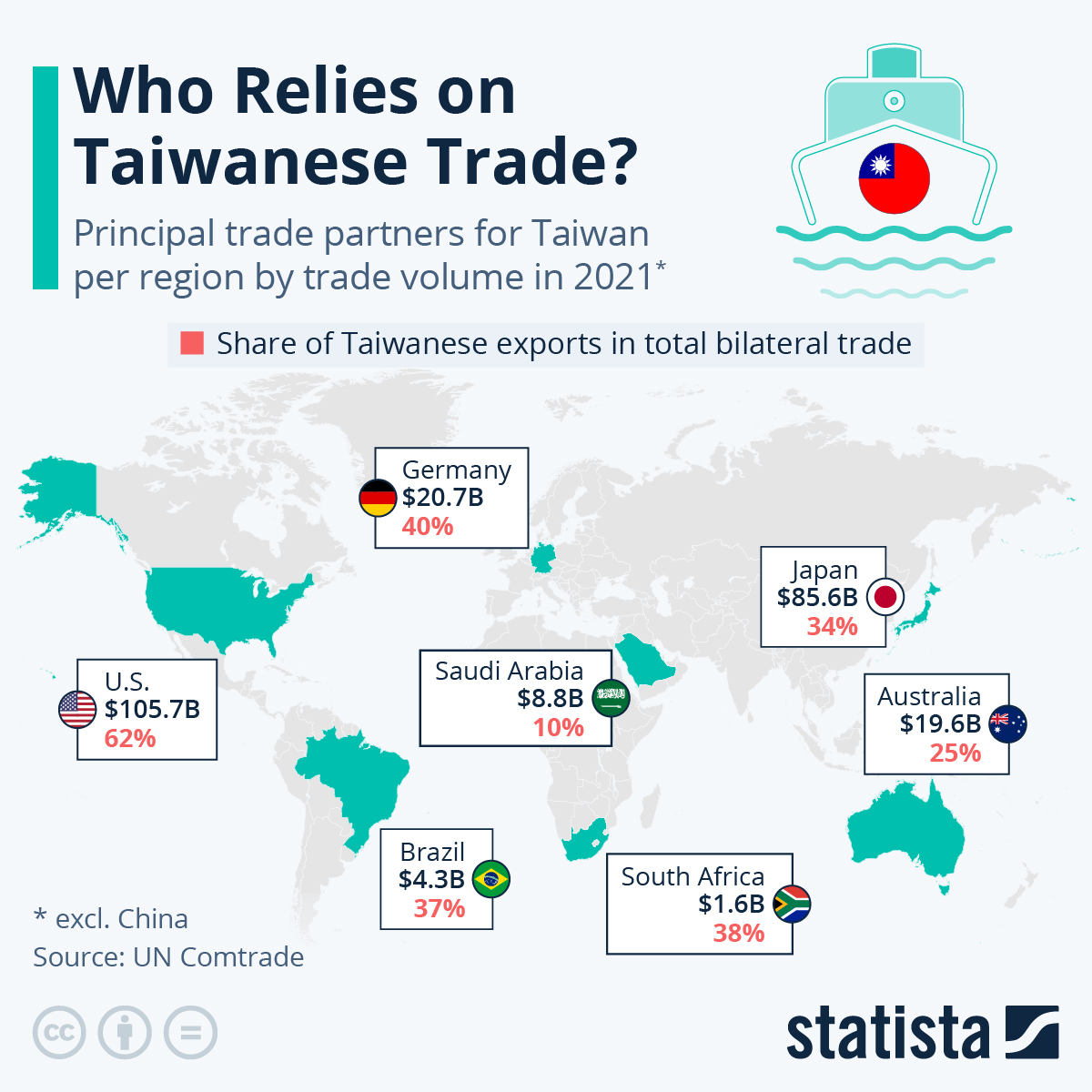 The United States are not the only one profiting from Taiwanese exports.

Germany, South Africa, Brazil, Saudi Arabia and Japan are Taiwan's principal trade partners in Europe, Africa, Latin America and the Caribbean, the Middle East and Oceania, respectively. Germany and Japan are especially reliant on the island's industry, with exports taking up 40 percent of the $21 billion in trade with the European country and 34 percent of the Japanese-Taiwanese trade volume of $86 billion.

The basis of the tensions between China and Taiwan is the hitherto unresolved question of independence. After the end of the Chinese civil war in 1949, the remaining supporters of the defeated Kuomintang retreated to the island. Once established there, they proclaimed the Republic of China, while the People's Republic sees the island, which is now governed democratically, as its own province.

Largely ignored in this equation is the role of Taiwan's indigenous peoples, 16 of whom are officially recognized as ethnic minorities. After a long history of colonization by the Netherlands, Spain, China and Japan, they still made up about 2.4 percent of the population in 2019.