By Tsvetana Paraskova of OilPrice.com

That’s the highest recorded average price for gasoline in the United States, ever.

Diesel prices also hit a new high on Wednesday, reaching $5.553 a gallon. This is the highest average price ever recorded, too.

Average U.S. gasoline prices have reached new records every day this week, with Monday’s price at $4.328 per gallon. The gasoline price increased to $4.374 a gallon on Tuesday, to pass the $4.40 mark on Wednesday for the latest all-time high.

To compare, at this time last year, the national average U.S. gasoline price stood at $2.985 per gallon, per AAA data. 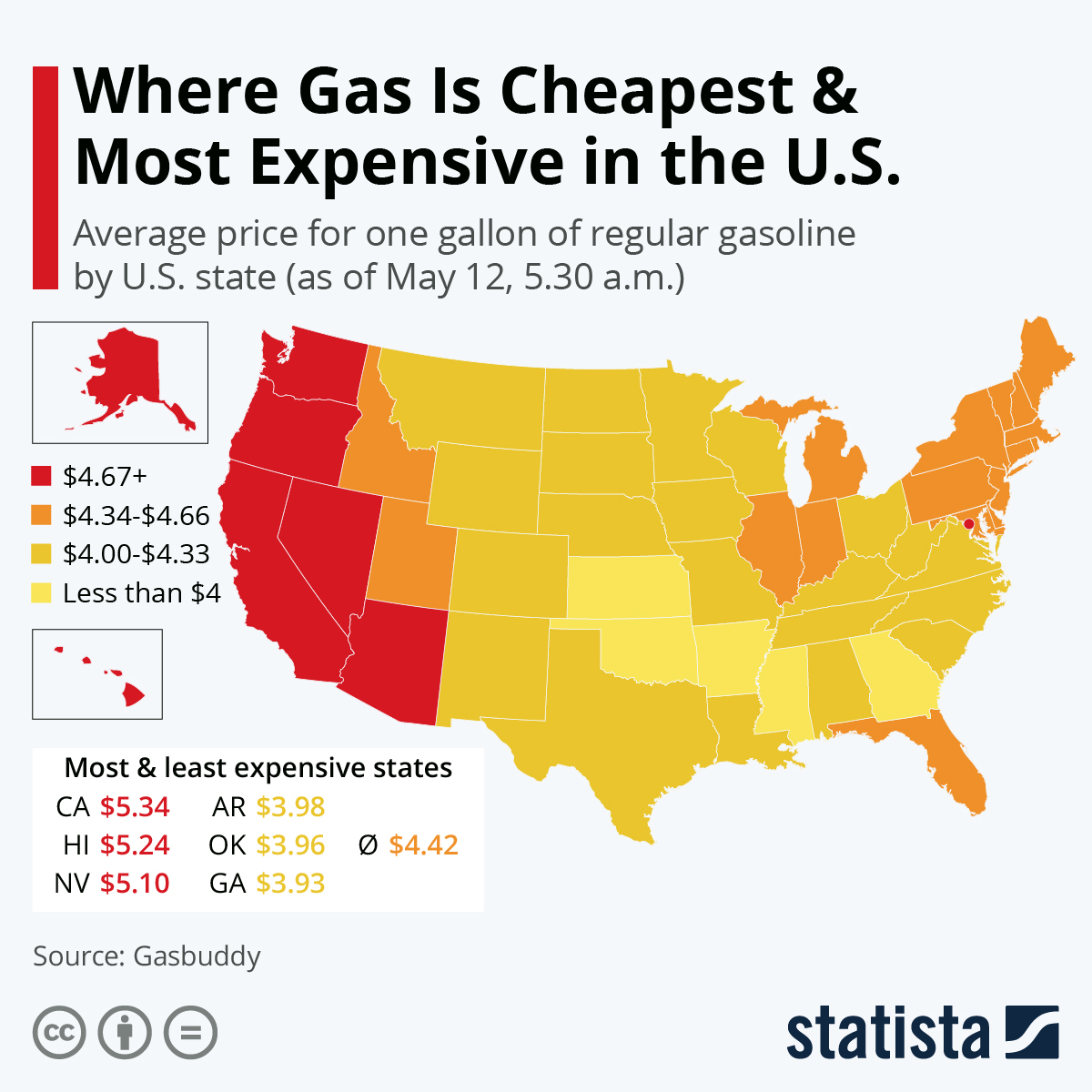 High international crude oil prices, with markets rattled by the Russian invasion of Ukraine and a post-COVID recovery in travel demand, have been pushing U.S. gasoline prices higher this year.

According to forecasts by fuel-savings app GasBuddy, U.S. gasoline prices will see the highest monthly average for 2022 in May. GasBuddy sees prices averaging $4.25/gal in May, but they could rise as high as $4.51/gal nationally, Patrick De Haan, head of petroleum analysis for GasBuddy, tweeted on Tuesday. Gasoline prices could hit $4.62/gal on some days in August this year, GasBuddy’s forecasts show. The yearly average for 2022 is predicted at $3.99 per gallon.

Meanwhile, the price of diesel has also soared to record highs amid very tight domestic inventories of middle distillates and a global shortage of supply. Diesel is used in every part of the industrial activity and supply chain, from goods transportation to manufacturing and agriculture; it fuels America’s economy. Diesel prices have soared to record highs in recent months, adding further upward pressure on U.S. inflation figures.

The exceptionally tight diesel market at home and abroad is unlikely to ease any time soon, considering the post-COVID demand from industry and for leisure and travel, as well as the reduced supply of diesel, other fuels, and crude oil from Russia following the invasion of Ukraine and the bans on Russian imports or self-sanctioning of buyers in the West to buy Russian energy goods.

On the East Coast, inventories are at their lowest ever, as the refinery capacity in the region has halved over the past decade to just 818,000 barrels per day now.

So, instead of focusing on boosting the production of gasoline in the summer driving season, this year U.S. refiners could be looking to raise diesel and jet fuel runs, as the global market of distillates is very tight following the Russian war in Ukraine and supports high refinery margins for those products.

The global diesel crunch is expected to worsen if the EU reaches some kind of a compromise on banning Russian crude and oil product imports. This will keep diesel prices elevated, impacting every economic activity in the U.S. and elsewhere, and ultimately hitting consumers.

Currently, diesel at New York harbor is trading at around $5 per gallon, which is well above $200 per barrel, Tom Kloza, head of global energy research at OPIS, told CNBC’s Pippa Stevens.

“These are numbers that are not just off the charts. They’re off the walls, out of the building, and maybe out of the solar system,” Kloza told CNBC.