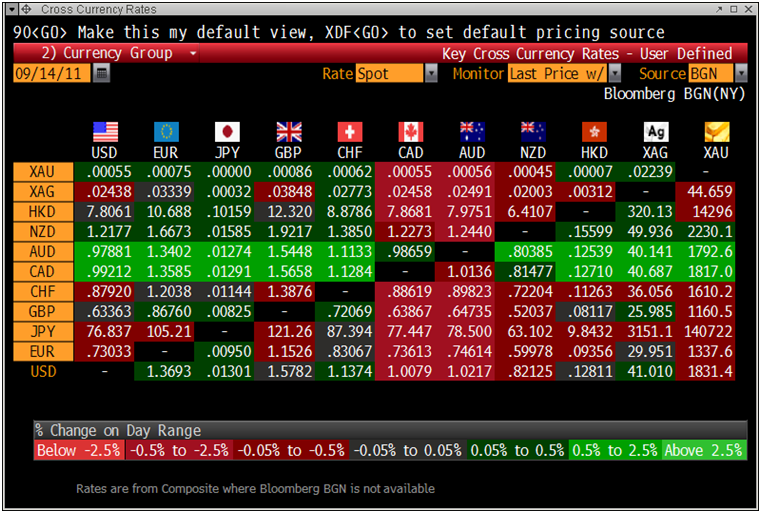 Gold remains well bid above the $1,800/oz level as value buyers continue to diversify into safe haven bullion due to the real risk of contagion in Europe and globally.

Normally gold’s sell offs are swift and sharp with a series of consecutive daily down days seen. This is not happening and yesterday’s rise suggests that gold may be bottoming after a brief correction.

Technically, gold would need to close the week higher before the somewhat negative short term technical picture was negated.

Volatility and wild gyrations in all financial markets continues due to a confluence of negative data, news and fundamentals.

French banks have been downgraded and Chinese Premier Wen’s call that Europe get its own house in order quashed the unsubstantiated and unsourced rumors regarding massive Chinese intervention to solve the Eurozone debt crisis.

European banks are hemorrhaging deposits as savers and money funds pile into other perceived havens such sterling, dollar and Swiss franc deposit accounts. Retail and institutional deposits at Greek banks fell 19 percent in the past year and almost 40 percent at Irish lenders in 18 months.

A tiny fraction of these European deposits has gone into gold with the majority going into other fiat currency deposits. It is not just the saver of periphery nations who are opening non euro deposit accounts - many German savers are opening up deposit accounts in Switzerland.

Greece’s inevitable default is being prepared for despite the usual denials. A conference call among Greek Prime Minister George Papandreou, French President Nicolas Sarkozy and German Chancellor Angela Merkel is set for 16:00 GMT.

More obfuscation and delusion is likely unfortunately but it may lead to another misguided bout of irrational exuberance and excessive risk appetite.

The reality is that a default by Greece is inevitable and indeed a breakup of the European monetary system and reversion by some countries to national currencies seems increasingly inevitable.

A Jefferies report suggesting that Europe is about to experience a Lehman Brothers collapse and splintering of the Eurozone continues to be digested and reverberate around global markets.

The report echoes and confirms what more astute observers, including GoldCore, have been warning of for some time.

The author is David Zervos, Managing Director and the Head of Global Fixed Income Strategy at Jefferies and a former Federal Reserve official (Visiting Advisor in the Division of Monetary Affairs in the Federal Reserve Board in Washington DC).

The Jefferies report first covered on Zero Hedge warns of “a move towards financial market nationalization that will make the U.S. experience look like a walk in the park.”

They warn of a breakup of the euro and periphery countries returning to their respective currencies – the escudo, lira, punt, peseta and drachma. However they focus on Portugal, Ireland and Greece or what they term the ‘PIG’.

“The most likely scenario for these countries is full bank nationalization followed by exit and currency reintroduction.”

The report points out the disparity between the U.S. CDS price and the German CDS price (50bps and 90 bps respectively).

This shows that contagion is taking place.

“Bunds are not a safe haven in this world – and there is no place in Europe that will be immune from this dislocation.”

The ‘Perfect Storm’ is a much bandied about and over used term but it does capture the scale of the challenges facing us today.

Contagion is here and now and we are witnessing a ‘Perfect Storm’ involving a global banking and sovereign debt crisis leading to an international monetary crisis.

The scale of the debt crisis is so humongous that it is now beyond the scope of policy makers and central banks to sort out.

The primary response so far has been socialization of risk (taxpayers bailing out banks), competitive currency devaluations and the debasement of major currencies internationally.

If this response continues – it will ultimately lead to an international monetary crisis.

Global property bubbles, leveraged finance and high risk securitization was the elephant in the room in the years prior to the start of global financial and economic crisis in 2007. Many warned but were ignored.

Now the elephant in the room is the growing risk of an international monetary crisis due to the real risks posed to the global reserve currency the dollar and to the not so ‘single’ currency’, the euro.

Gold will continue to act as a safe haven asset and protect people in the event of an international monetary crisis.

(The Motley Fool)
Is Gold Being Suppressed?