Last week, when we reported that Syria has decided to enter the Golan Heights DMZ, and "provoke" yet another pro-Western stalwart, Israel, we said: "Syria can't wait to start a war, hopefully one which also involves Iran, and provokes the punishment of NATO and the west." We said this because when it comes to what the "fair and objective" media has deemed rogue states, the theory of rational actors no longer applies. Such is the case now in Syria, whose regime is not only involved in a bloody civil war (whose one-sided accounts we get each and every day), but it recently did everything in its power to start a war with Turkey (which failed after it became clear time and again that this was nothing but one huge false flag provocation) and thus provoke NATO's fury which would naturally wipe Syria off the map with the UN's blessing, and start a broader Middle Eastern conflict which certainly would not end there, but has also escalated to Israel just to be certain it gets promptly retaliated against. Today, we learn that Syria has finally gotten what it so urgently desired, after Israel, for the first time since the 1973 war "returned fire on Syrian military forces after Syrian shells exploded in Israeli territory."

Naturally, this escalation to Syrian "provocations" was inevitable: a crippled regime doesn't do everything in its power to provoke terminal retaliation by the West without getting what it so desperately needs... Just in case comparable provocations by Iran fail to yield the desired results.

The Israeli military has fired a missile into Syria, the first time Israel has been drawn into the fighting in the neighboring country.

The military said it fired the missile as a warning shot on Sunday after a stray mortar from Syria hit a military post in the Golan Heights. Israel captured the Golan from Syria in the 1967 Mideast war and subsequently annexed it.

The military says no damage or injuries were reported inside Israel.

A string of mortar shells have struck the Golan during the Syrian civil war. Israel views the fire as accidental, but nonetheless has warned that it holds Syria responsible. 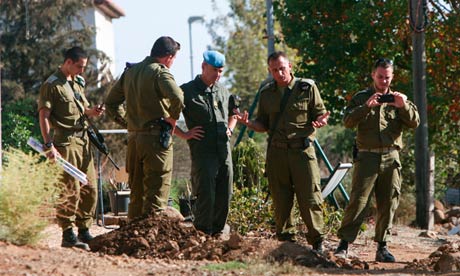 It goes without saying that this is merely the first proverbial shot across the  bow, or in this case the DMZ. Much more to follow, until finally the UN rules, and the fair and objective media backs it, that the time to invade liberate Syria has come.

One can only hope that China and Russia will sit quietly on the sidelines when this eventually happens.