Gold is 0.25% higher this morning after posting the biggest weekly gain (+3.3%) since late August on safe haven buying driven by worries about the U.S. fiscal cliff and economy.

President Obama is meeting with leaders this week and is expected to speak on the subject on Wednesday. $600 billion in tax increases and budget cuts are set to start in January which is making markets nervous and leading to diversification into gold.

Gold and especially silver buying in India has been robust for the Indian Dhanteras festival.

The Times of India reports that high prices have “done little to mar the spirit of buyers who are splurging on the yellow metal like never before. In fact, people were seen queuing up in jewellery shops across the city to buy gold, silver and other precious metals.”

White, not yellow, was the preference this Dhanteras and there was “big buys of silver on strong festive demand.” Dhanteras, the 13th day of the Hindu calendar month of Ashwin, is considered auspicious to buy precious metals.

The London Bullion Market Association (LBMA) gold conference has begun in Hong Kong and already there have been important stories with ramifications for the gold, currency and wider markets.

There is a real possibility of market moving stories coming from the gold industries leading conference.

News that China will inevitably increase central bank purchases of gold for its reserves was highlighted by the LBMA Chairman in Hong Kong.

Chairman of the LBMA David Gornall told the conference, “When comparing China to the U.S., it would seem that in China, gold asset allocation can only go in one direction.  The country has only 2% of its reserves in the form of gold compared with the U.S. at 75%.”

The People’s Bank of China hasn’t disclosed any changes to its gold holdings since 2009, when it said they had risen a whopping 76% to 1,054 metric tons. While the U.S., Germany, Italy and France keep more than 70% of reserves in gold, China’s share is less than 2%.

“Prices have recently been supported by official sector buying,” Gornall said today, without listing any central bank. “Will the gap between the amount of gold held in reserve by the developing markets and that of the developed world close?”

Brazil, South Korea and Russia have all added gold reserves this year data from the International Monetary Fund show. Nations bought 254.2 tons in the first six months and may increase to 500 tons this year, the World Gold Council said in August, exceeding the 456 tons added in 2011.

China has the world’s largest foreign-exchange reserves, totaling $3.29 trillion in September, according to data by Bloomberg.

“Emerging-market economies from the G-20 countries are looking to elevate their gold holdings,” Ashish Bhatia, manager of government affairs at the producer-funded World Gold Council, said in an interview in Hong Kong yesterday. There’s “renewed interest from central banks on the demand side.”

All banks trading on the China Foreign Exchange Trading System and National International Funding Centre will eventually be able to trade in the market, including foreign banks, Wang Zhe, chairman and president of the Shanghai Gold Exchange (SGE).

This move may further enable China to overtake India as the world’s biggest owner of gold.

According to the Hong Kong Census Bureau, in September Chinese gross imports soared by 30% reverting to the long-term trendline of 65 tons in gross imports per month, and rising to a total of 69.7 tons. Year to date China has now imported a very large 582 tons of gold, more than the official holdings of India at 558 tons

According to Reuters reporting from the LBMA, the People's Bank of China general director, Xie Duo, announced that the central bank has no specific time frame on issuing more gold import licenses to banks, but is keen to further open up the market to the international community.

The bank sells physical gold and silver, and offers a gold accumulation plan that allows investors to contribute a small amount of money each month and take physical delivery after a period of time.

Marc Faber gave a great presentation to the conference. He warned that a deflationary debt implosion will come. Not a question of when - but problem is knowing when.

He warned that Bernanke can drop as many dollar bills into this room as he likes, but he can't know what we will do with them. He said that QE may be boosting China rather than the U.S.

He said that problem is not just Bernanke but the Federal Reserve and that numerous US Fed members make Mr. Bernanke "look like an inflation hawk."

Faber estimates inflation is now 5-10% and is much higher than bogus official estimates. With his customary wit, he said that 'only at the Fed don't they eat or drive.' 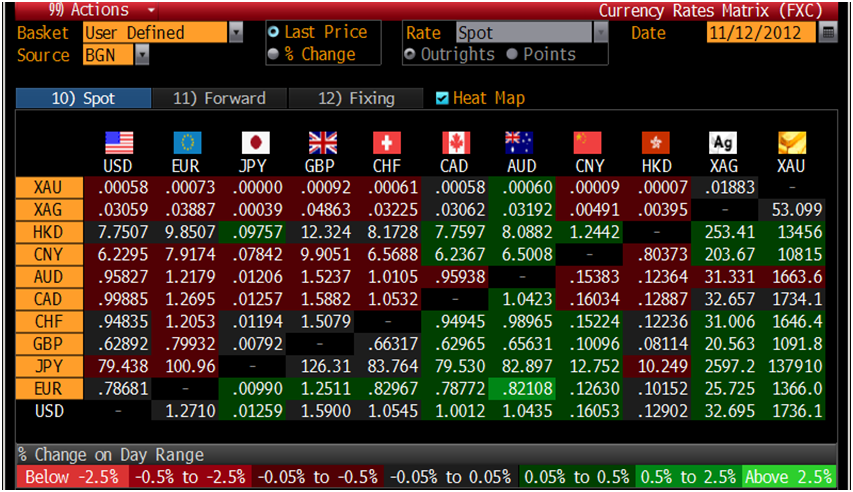 People accept that gold is the best commodity to invest in regardless of price levels: Kamboj

Demand may climb as much as 15% this quarter as festivals, price decline boost ornaments, coin, bar sales, Rajesh Mehta, chairman of Rajesh Exports Ltd., said on Nov. 9. Dhanteras is considered by the majority Hindu population as an auspicious day to buy the precious metal.

(Bloomberg) -- Gold ETF Sales Not Going to Happen on Major Scale, Barrick Says
People see gold as being a percentage of their portfolio and they want to hold it for the long term, Jamie Sokalsky, CEO of Barrick, says in an interview in Hong Kong today.

(Bloomberg) -- Bank of America Sees Silver Averaging $39 an Ounce in 4Q 2013
“Easy monetary policy will be a substantial incentive for investors to increase their precious metal holdings in 2013,” bank says in report dated Nov. 9.

Gold edges up, holds near 3-week high on US fiscal woes - Reuters

Bernanke's stamp on Fed could tie hands of successor - Reuters