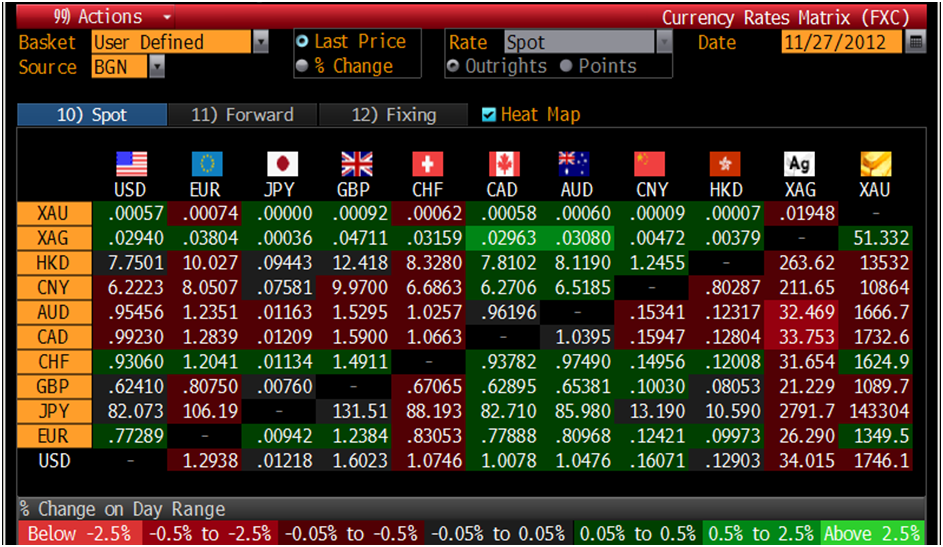 The 34.4 billion euro in aid plus reducing interest rates on the bailout loans expect to cut Greek debt to 124% of GDP.  The interest rates have been dropped to 50 basis points above the interbank rate so countries like Italy and Spain will be lending at a loss.

The Eurozone’s dangerous  but easy policy choice of “extend and pretend” continues which is bullish for gold in the coming months.

Mark Carney has been named as the new governor of the Bank of England by Chancellor George Osborne.

Mr Carney, the governor of the Canadian central bank, will serve for five years and will hold new regulatory powers over banks.

Carney would be considered something of a monetary dove.  The Goldman Sach’s alumni’s appointment means that ultra loose monetary policies will likely continue at the Bank of England leading to weakness in sterling – especially versus gold.

The US Commodity Futures Trading Commission said that institutions and hedge funds slightly raised their bullish bets on silver and gold futures in the week ending November 20th.

The White House and Republicans are still in a stalemate over the fiscal cliff. The White House press secretary said that President Obama is still waiting for a realistic proposal to look at.

“President Obama would be open to proposals that closed loopholes or capped deductions,” Carney said, “so long as raising the top tax rate remains on the table.”

Obama has asked for $1.6 trillion in higher revenues to pay down the debt. In the 2011 debt ceiling negotiations, Republicans were considering a plan that would involve only $800 billion in new revenue or half what is needed to avoid the cuts and pay down the deficit.

“Extend and pretend” will also likely be seen in the U.S. – with obvious ramifications for the medium and long term outlook of the dollar.

The Chinese Ministry of Industry and Information Technology said that China aims to produce between 420 and 450 tonnes of gold bullion in 2015, up about 25% from 2011, while consumption may reach 1,000 tonnes at that time.

The CME said that MTB will not be able to deliver metal as the lower Manhattan company deals with "operational limitations" almost a month after the arrival of Hurricane Sandy.

MTB is one of five depositories licensed to deliver gold against CME's benchmark 100-troy ounce gold contract, held 29,276 troy ounces of gold and 33,000 troy ounces of palladium as of Nov. 23, according to data from CME subsidiary Comex.

In a notice to customers on Monday, CME declared force majeure for the facility, a contract clause that frees parties from liability due to an event outside of their control.

CME said that individuals holding MTB warrants or certificates for a specific lot of metal stored in the depository, may receive gold delivered from Brinks Co. (BCO) in New York. MTB is responsible for any additional costs incurred by customers receiving metal from Brinks, CME said.

"This shouldn't have a material impact on the way market participants are doing business," a CME spokesman said. "They'll still contact MTB if they want to take delivery on contracts," and MTB will arrange for delivery through Brinks according to Dow Jones Newswires.

In a notice posted to its website dated Nov. 12, MTB said the firm "sustained substantial damages" following Hurricane Sandy's arrival in New York City on Oct. 29, and had curtailed its operations.

The force majeure will remain in effect until further notice from the exchange, the CME said. The delivery period for CME's December-delivery precious metals futures begins on Friday.

NEWSWIRE
(Bloomberg) -- Turkey Becomes Gold Reprocessing Center for Iran, Hurriyet Says
Scrap gold and gold jewelry imported into Turkey from Greece, Portugal, Cyprus, countries in the Balkans and North Africa being converted to standard gold bars within 4 hours in Turkey, Hurriyet newspaper says, without saying where it got the information.

-- Iranians use Turkish lira payments for natural gas at Turkish banks to buy gold in Turkey.

-- Gold is then exported back to Iran, or to countries including India, U.A.E., Qatar and Kuwait, where it can be exchanged for currency and transferred back to Iran.

(Bloomberg) -- ETF Securities Starts Gold, Silver, Platinum Funds on HKEx
The ETFs will track the London benchmark prices of the metals and begin trading tomorrow, according to a statement on the Hong Kong Exchanges website today.

The funds on silver and platinum are the first on the exchange for those commodities.

Mark Carney: New age is dawning for the Bank as George Osborne bags his man – The Telegraph

Greece Kicks The Can For The Third Time - SocGen's Take: "More Will Be Needed" – Zero Hedge