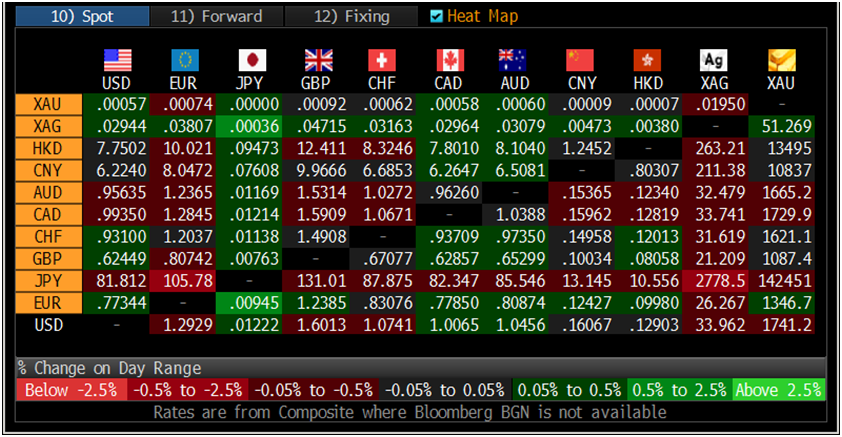 Gold remains unchanged on Wednesday and is likely being supported by the realisation that the Greek bailout deal may not be the success it was hailed to be, and also the time is running out for negotiations on the US fiscal cliff.

Gold prices will rise in 2013 Citi has said and gold remains one of their favoured commodities.

Despite some investors turning less bullish on gold, Citi continues to be bullish on gold in 2013. President Obama's victory was expected to be positive for gold since it would benefit from "a continuation of dovish monetary policy". Gold prices have also been supported by central bank gold purchases. Moreover muted gold demand in India is expected to have picked up during Diwali.

The yellow metal’s appeal is still strong as evidenced by recent investments by Soros, Paulson and other respected hedge fund managers. This buying and buying by other institutions such as PIMCO has led to continuing growth in holdings of the SPDR Gold Trust, the world's largest gold-backed ETF, which hit a record high of 1,345.813 tonnes on November 27th.

Global gold ETP holdings have climbed to a record for an eighth straight session showing robust demand for gold. The amount in exchange-traded products backed by the metal rose 0.2% to 2,612.1 metric tons, data tracked by Bloomberg showed.

In its weekly note on technicals, Commerzbank said gold is supported by a short-term uptrend at $1,735. "We will retain our bullish view while the current November low at $1,672.50 underpins," it said in its note picked up by Thomson Reuters.

Currency wars are set to intensify as the US Senate is considering new sanctions against Iran that would prevent Iran getting paid for its natural resource exports in gold bullion.

The new sanctions aimed at reducing global trade with Iran in the energy, shipping and precious metals sectors may soon be considered by the U.S. Senate as part of an annual defense policy bill, senators and aides said on Tuesday, according to Reuters.

The sanctions would end "Turkey's game of gold for natural gas," Reuters reported a senior Senate aide as saying, referring to reports that Turkey has been paying for natural gas with gold due to sanctions rules.

The legislation "would bring economic sanctions on Iran near de facto trade embargo levels with the hope of speeding up the date by which Iran's economy will collapse," the aide said.

It is also reported that Iranians are buying Turkish gold with the Turkish Lira, which is deposited into their bank accounts in exchange for Turkey’s natural gas purchases, the deputy prime minister said at midnight Nov. 22 during a parliamentary session.

Iran has been forced to shun the international financial system and the petrodollar as means of payment and turn to the international gold market to ensure it gets paid for its natural resources in order to prevent absolute economic collapse.

The law of unintended consequences may apply here and should the Iranian currency and economy collapse there is likely to be a war with Israel and turbulence in the Middle East akin to, if not worse, than that seen in the 1970’s.

BOK may increase gold within this year.

Gold is poised for 12th consecutive annual advance after rising 12% since start of January.

NOTE: 12 annual gains would be longest winning streak since at least 1920, data compiled by Bloomberg show.