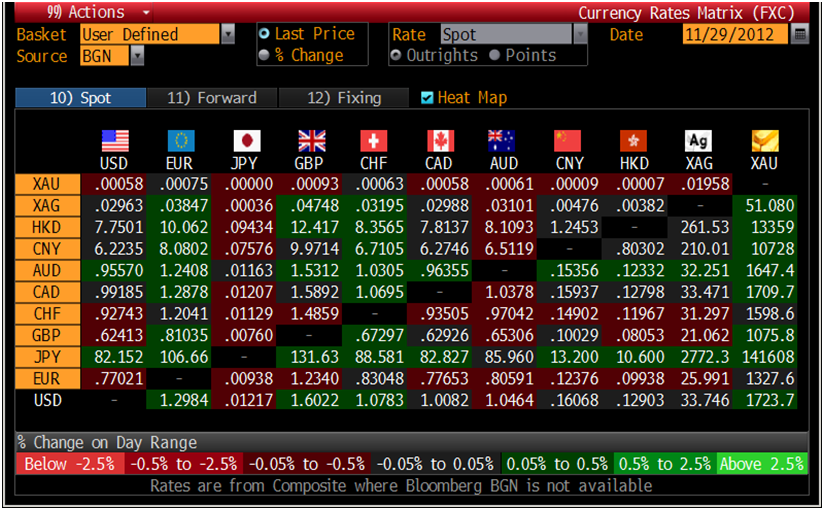 Gold recovered somewhat overnight in Asia and again today in Europe despite the sharp selling seen on the COMEX yesterday.

As ever, it is very difficult to pinpoint exactly why gold and all precious metals fell in price. Interestingly, oil fell by even more - NYMEX crude was down by 1% and was down by more than 1.7% at one stage.

The CME Group, which operates the U.S. COMEX gold futures market, said Wednesday's plunge in gold was not the consequence of a "fat finger" or a human error. The trading wasn’t even fast enough to trigger a pause on Globex, said CME.

One thing that we can say for certain was that there was massive, concentrated selling as the New York stock markets opened with some 35,000 lots sold which is equivalent to 3.5 million ounces and saw the price fall from $1,735/oz to $1,711/oz between 0825 and 0830 EST.

The selling may have been by speculative players on the COMEX. It may have been algo or computer trading driven or tech selling – although this is less likely.

Informed commentators questioned the nature of the selling as a large institutional COMEX trading entity would normally gradually sell a position of this size in order to maximise profit.

Other speculation was that because of the wholesale liquidation of all precious metals and some other commodities, the selling may have come from a fund forced to sell a range of speculative positions after the SAC Wells notice.

Futures and options expiration may have also played a role, according to some analysts.

The robustness of gold overnight and recovery this morning is encouraging as normally one would expect to see follow through selling after such a sharp move lower.

The gold mining stocks indices were also higher yesterday which suggests that some precious metal market participants see the move as another mere blip in the precious metal bull markets.

The fundamentals driving the gold market remain very sound with broad based demand - store of wealth, investor, institutional and central bank - continuing to be seen globally.

There have not been very significant increases in open interest on the COMEX and there is no mania on trading floors and universal bullishness.

Indeed, this is far from the case today. There continues to be little or no positive coverage of the precious metals in the non specialist financial media.

While ETF holdings are at record highs - the increase in holdings has been tentative and gradual with no huge jump in demand which would be associated by a market top.

The shoeshine girls and boys have been selling large amounts of gold jewellery in the international phenomenon that is 'cash for gold.'

Physical buyers should use the paper playing shenanigans of as yet unidentified players to continue to accumulate on price dips.

NEWSWIRE
(Bloomberg) -- Comex Silver Estimated Volume Rises to Highest Since May 2011
Aggregate volume was ~158,580 contracts today, highest since May 12, 2011.

Gold Fields Ltd., the fourth-biggest producer of the metal, will spin off part of its South African business as a wave of strikes and above-inflation pay gains add to costs and curb output for mining companies in the country.

Net income dropped to HK$1.82 billion ($235 million) from HK$2.69 billion for the six months ended Sept. 30, according to a Hong Kong stock exchange filing today. That compares with the median estimate of HK$2.02 billion of four analysts surveyed by Bloomberg News.

Gold’s drop yesterday may not have been because of the U.S. fiscal cliff because growth sensitive markets such as the S&P 500 and silver that should have been hit harder didn’t fall as much as gold, Xiao Fu, an analyst at the bank in London, said in a report dated today. “This would suggest that gold was probably reacting to specific gold flow selling,” Fu said in the report. “On this basis, we would see this weakness as temporary particularly since we would view the combination of a debt downgrade and the U.S. avoiding the fiscal cliff as gold price bullish. Indeed events during August 2011 when U.S. Treasury debt was downgraded proved to be unambiguously bullish for gold prices.”

How Do the Chinese View the Gold Market? – Zero Hedge

The Biggest Story Of Our Lifetime - MoneyWeek

The Possibility of a Currency Collapse in Japan – Max Keiser