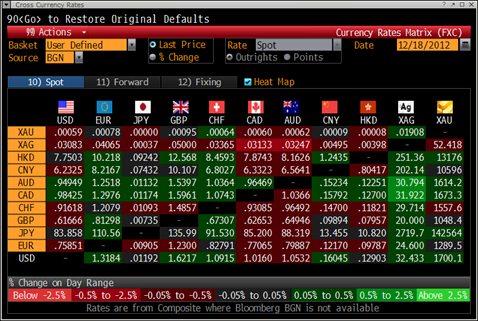 Precious metals crept higher yesterday and closed with very slight gains for both gold and silver.

Prices crept gradually higher in Asian trading prior to some retrenchment in early European trading.

U.K. inflation held at the highest since May in November as higher food, electricity and gas costs kept consumer-price growth above the Bank of England’s target.

The fastest price rises were seen in the cost of fruit, bread and cereals, as well as in energy bills, the Office for National Statistics (ONS) said. Inflation is now expected by many investors and economists to creep up further next year as further increases in electricity and gas prices take effect.

Many traders are on the sideline as trading slows down prior to Christmas. The focus remains on U.S. lawmakers attempts to cobble together a deal to avert the 'fiscal cliff'. There is optimism that a deal can be done to avert fiscal disaster.

While this may be the case in the short term - another short term political panacea which fails to address the very poor deep rooted structural fiscal challenges may lead to an even greater fiscal disaster in the course of President Obama's second term.

The fundamentals which have led to another annual gain in 2012 (8% in dollar terms) remain in place.

Ultra loose monetary policies from the U.S. Federal Reserve, the Bank of England and other central banks will provide support, as currency debasement and rising inflation leads to continuing demand for bullion.

These fundamentals are leading to broad based global demand for gold - from retail investors to institutions and pension funds. Japanese pension funds are increasingly looking at gold according to an article in the Wall Street Journal this morning.

Diversification into gold is taking place in order to protect against sovereign risk, debasement of currency risk and inflation risk.

In March 2012, Okayama Metal & Machinery became the first Japanese pension fund to make public purchases of gold, in a sign of dwindling faith in paper currencies. Okayama manages pension funds for about 260 small and mid-sized companies in the Okayama area.

"By diversifying currencies, we aim to reduce risks associated with them," said Yoshi Kiguchi, the fund's chief investment officer. "Yields become stable if you put small amounts into as many types of holdings as possible."

Initially, the fund aims to keep about 1.5% of its total assets of Y40bn ($500m) in bullion-backed exchange traded funds, according to chief investment officer Yoshisuke Kiguchi, who said he was diversifying into gold to “escape sovereign risk”.

Other pension funds in Japan are following their lead according to the Wall Street Journal.

Japanese pension funds are diversifying into gold "largely to mitigate the damage from possible market shocks".

Japanese pension funds invest mainly in domestic stocks and bonds. Until recently, none have looked to gold or other physical assets.

This strategy has produced meager returns at a time when bonds offer historically low yields and the stock market has stagnated.

Gold, whose price movement isn't historically correlated with those of stocks or bonds, can protect portfolios from being damaged too badly in times of market stress, investment managers say. Low interest rates also justify holding non-yielding gold in place of cash.

Mitsubishi UFJ Trust and Banking Corporation said it has secured more than Y2 billion in investments from two pension funds for a gold fund it started in March.

Gold is also used as a hedge against inflation, which is becoming a bigger concern as global central banks buy ever-more bonds, market watchers say.

The Bank of Japan has increased its purchases of Japanese government debt from the market and is under political pressure to do more. Shinzo Abe, Japan's next prime minister, has said he wants the central bank to employ "unlimited easing measures" to achieve a 2% inflation target.

Higher inflation could drive up interest rates and erode the value of the Japanese government bonds in which pension funds have invested most of their money.

In some ways, Japanese pension funds are merely tracking a trend that has already been seen in other developed markets, industry watchers say. Gold's potential to offset inflation-linked losses has already prompted some U.S. and European pension funds to buy small volumes. The Teacher Retirement System of Texas pension trust fund, for example, held $235 million of SPDR Gold Shares GLD +0.19% out of its total investment net value of $111.1 billion, as of end-August.

The emergence of gold exchange-traded funds has enabled pension funds to invest in gold without holding the physical product. Some funds restrict themselves from investing in physical assets. The first ETF backed by actual gold was introduced in Japan in June 2008.

ETFs "opened the door" to investment in gold, said Tetsu Emori, chief fund manager at Astmax Investment Management Inc., which manages ¥70 billion in assets. Roughly 60% of its portfolio is invested in commodities, with gold accounting for the largest portion.

In March 2011, Mizuho Trust & Banking Co. started incorporating gold in a package product for pension funds that invests in various assets, including gold ETFs. Gold accounts for about 3% of the package. The product has attracted ¥180 billion in investment from about 200 pension funds.

The vast majority of pension funds continue to shy away from gold, an investment that offers no yield and, in the case of physical gold, actually costs money to store.

But the potential for market turmoil and expectations of inflation could change that, industry experts say.

Even a small allocation by pension funds internationally to gold would result in a significant new source of demand which could be a new fundamental factor which propels prices higher in the coming years.

Corporate insiders increasingly bullish on gold - The Globe and Mail

Charting US Debt And Deficit Since Inception - Zero Hedge