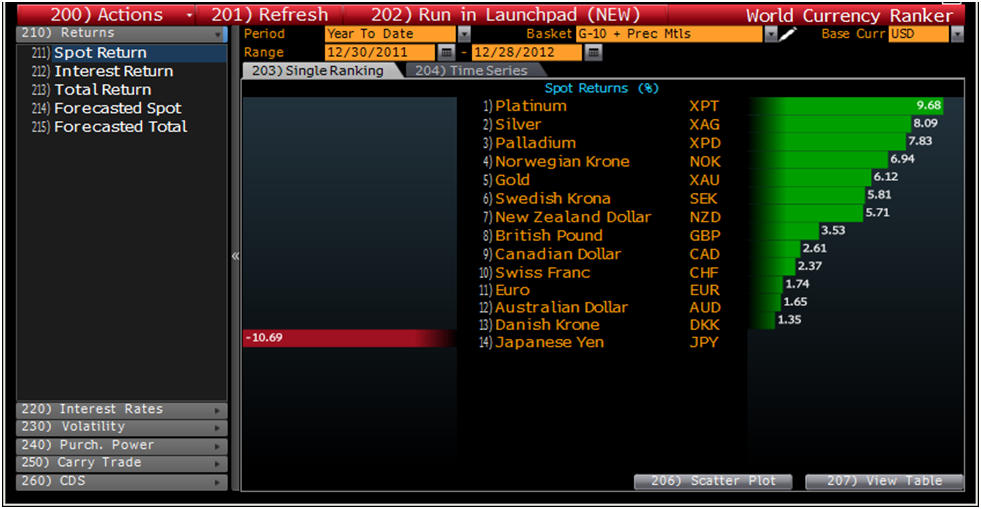 Gold pared back early gains and edged down on Friday and tick tock goes the US “fiscal cliff” clock as time is running out for the somewhat irrelevant New Year’s deadline.

Gold bullion prices are on target for their first weekly gain in a month after the sharp fall in December (-3%)  led to bargain hunters buying the dip. Gold bottomed on December 29th last year prior to very strong gains in January 2012 and we believe a similar pattern may be seen again this year.

The yellow metal looks set to rack up its 12th straight year of gains on low to zero interest rates, concerns of the eurozone debt crisis and diversification into bullion by central banks.

2013 should see global gold demand grow on further strength from China and a recovery in India, helping the precious metal continue its bull run into its 13th year, according to the World Gold Council.

President Obama meets congressional leaders from both parties regarding the fiscal cliff and if a deal isn’t struck it will likely fuel safe haven buying of gold.

Negotiations to avert the ‘fiscal cliff’ offer great political drama, but they won’t solve America’s looming budget and debt crisis and may cast the nation into another recession or worse.

A deal is likely to be done but any deal will be another cynical exercise of kicking the can down the road while failing again to address the root causes of the debt crisis which is too much debt at all levels of American society.

The political and media side show that is the so-called “fiscal cliff” will soon be overshadowed by the appalling and rapidly deteriorating situation regarding the U.S. national debt.

Treasury Secretary Timothy Geithner has alerted Congress that the nation will once again hit the debt ceiling on Monday, but that his department can take “extraordinary measures” to keep paying the bills for another few months.

Incredibly, the debt ceiling was raised from $14.294 trillion in August 2011, to its current level of $16.394 trillion. Thus in the span of only sixteen months, the Obama administration has added a whopping $2.1 trillion to the national debt.

The U.S. federal deficit is now exceeding $1 trillion dollars every year —up from $161 billion in 2007, the last year before the financial crisis. Spending is up some $1 trillion, as outlays for Social Security, Medicare, Medicaid and other entitlements have increased by an amount equal to the entire 2013 military budget – a budget which may again surpass the combined military expenditure of every other nation in the world.

U.S. unfunded liabilities are now estimated at between $50 trillion and $100 trillion and by the end of the decade (in less than just 7 years), runaway entitlement spending will require shutting down the military or crippling many other vital domestic spending programs to head off massive deficits that will likely lead to a dollar crisis and significant inflation.

No matter what deal is eventually agreed, whether before or after the new year, it will at best nibble at the edges of the trillion dollar annual deficits that are being piled up.

While all the focus has been on the so called U.S. ‘fiscal cliff’, amnesia has taken hold and many market participants have forgotten about the far from resolved Eurozone debt crisis – not to mention looming debt crisis in the UK and Japan. 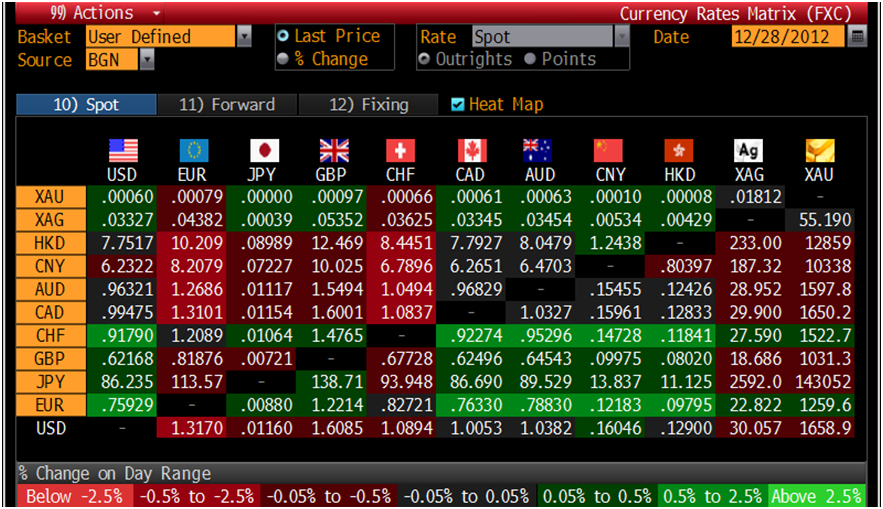 In Japan, the national debt is seen topping ¥1 quadrillion by the end of March 2013. A policy of money printing pursued for a decade has failed abysmally and now politicians look set to pursue currency debasement in an even more aggressive manner – with attendant consequences.

The UK is one of the most indebted countries in the industrialised world - the national debt now stands at more than 1 trillion pounds ($1.6 trillion) and total debt to GDP in the UK remains over 500%.

Gold is traditionally sought out as a safe-haven and inflation hedge that investors diversify into in times of trouble. This is because throughout history, those who own physical gold have been protected from financial, economic and monetary crisis.

Gold has lately been behaving like any risk asset. However, buyers should continues to focus on the long term as gold ownership will protect people from the fiscal abyss facing major economies and currencies internationally in the coming years.

(Bloomberg) -- Gartman Buying Gold Again in Euros and May Add to Purchases
Economist Dennis Gartman is buying one unit of gold in euros today.

A close above 1,265 euros this week “would force us to add to the position,” Gartman said in his daily report today.

The bourse will widen the trading bands for gold contracts to 10% from 9% from Dec. 31, the statement says.

Silver contract margin requirement will be unchanged and the trading bands will be increased to 13% from 12%, it says.

The exchange made the changes to prevent risks during market closure from Jan. 1 to Jan. 3, the statement says.

Gold on track for best weekly gain since November - Reuters

Twenty Reasons to Buy Silver for the Long-Term - SilverSeek

The Coming Isolation of US Dollar - GoldSeek