Guest Post: The US Debt Crisis - How High Will It Go?

The implications of the US debt crisis are not well understood in most circles, and it is not widely spoken about in the media and during important political debates. The irony is that the US debt is so significant that it plays a monumental role in finance and modern political strategy. The debt poses great risks moving forward, and yet it is referred to in only the vaguest of terms.

Here is why the US debt must grow every year and why it is mathematically impossible for it to continue forever.

Before we can understand why the debt must grow every year, here is is a visual representation, to scale, of how much the current debt is standing at. Each tall uniform column in the background of the picture below refers to a pile of $100 bills stacked one on top of another. Each “tower of debt” consists of 10 x 10 fork-lift palettes that reach out into the sky and are higher than the old World Trade Center buildings. These towers of debt represent $US 16.394 trillion. However, by the time you wake up to read this, it will be larger than that. DemonOcracy does great work on visual representation of the US debt levels. 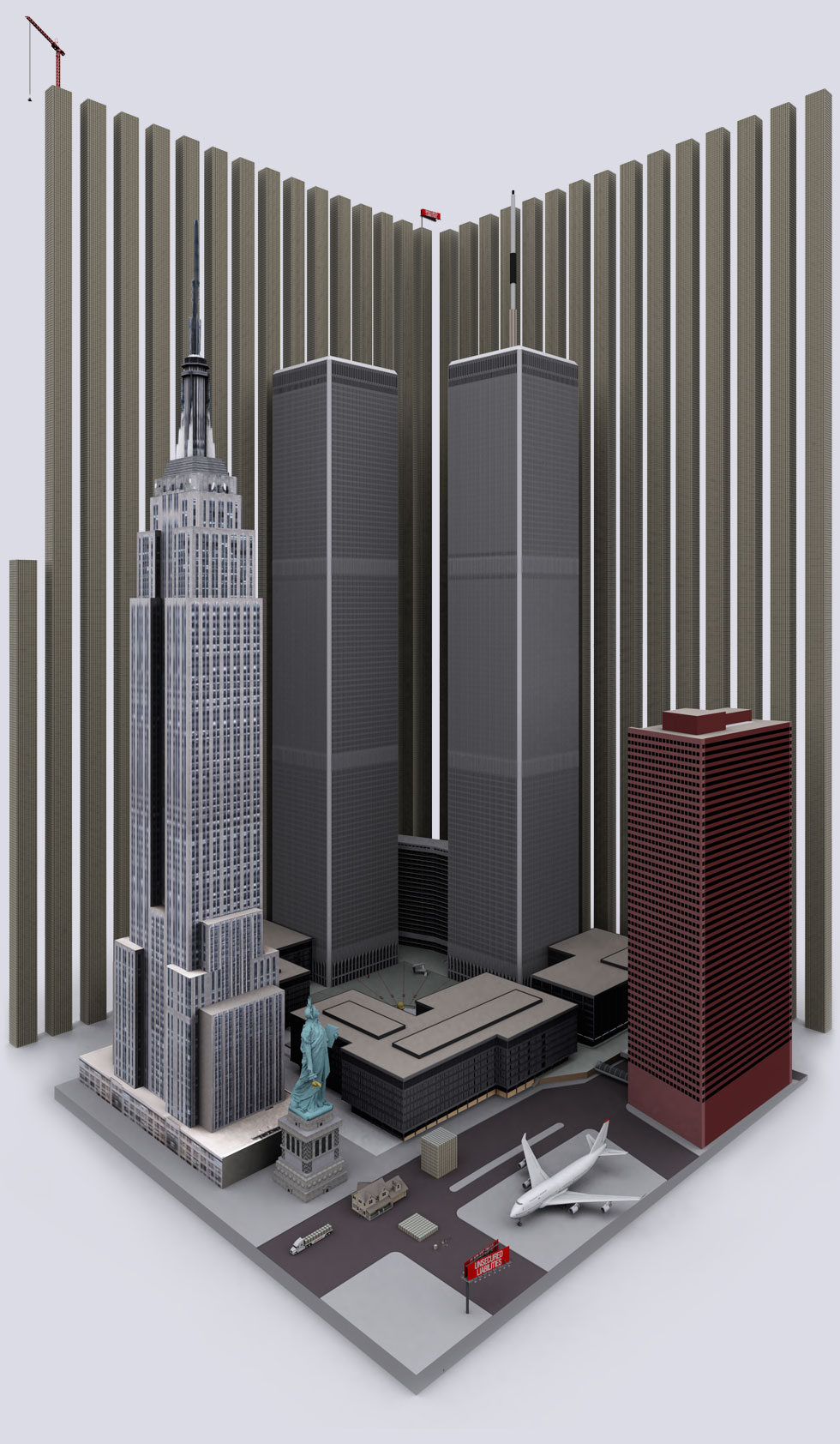 Why did the US debt grow to these proportions?

Short answer: the US government spends more than what it receives in revenue. In 2012, the US federal government expects to receive $2.5 trillion in revenue, while the total spending carried out by the federal government is $3.8 trillion. The difference ($1.3 trillion) is debt piled onto of the previous debt.

To put $1.3 trillion into context, it is approximately $3,56 billion a day. To make matters worse, the current debt does not take into consideration federal obligations such as social security, Medicare, pension, and retiree health promises. According to David Walker, former controller of the US, when these unfunded programs are added to the enormous debt, it stands at $70 trillion and growing–that is $10 million per minute!

Seventy trillion dollars is over four times the debt in the picture on your left, dwarfing the current US GDP; in fact, it is approximately the world’s annual GDP in 2011. For a current view of the US debt, see the debt clock here.

The government allows for the debt to continue to grow by adding new debt on top of old debt plus compounded interest. Instead of paying back the debt, the government just borrows more to cover previous interest. The interest payments on the debt is over $1 billion a day. When “Uncle Sam” takes out a loan, it is called a bond (I.O.U.). These bonds are purchased by investors, banks, and foreigners. These bonds are a promise to pay capital plus interest. What “Uncle Sam” does, essentially, is pay his investors with his credit card and create new loans to cover interest.

Talk about short-sighted finances with no discipline.

Compounded interest has allowed the debt to grow exponentially, and has reached, in my opinion, unsustainable levels where the debt is reaching at the vertical portion of the “hockey stick” formation. 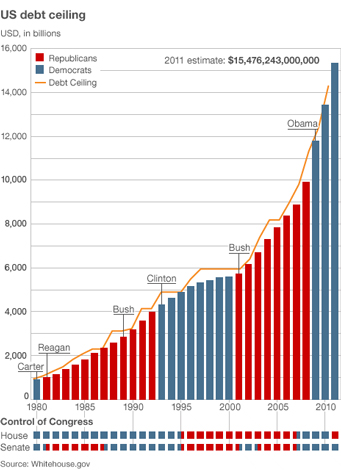 Compound interest is the eighth wonder of the world. He who understands it, earns it … he who doesn’t … pays it.

How does the US government allow the US debt to grow?

Doing the “right thing” is usually political suicide for politicians. Cutting expenditure to pay its bills to pay down the debt will make the economy implode. Instead, the government in power continues its daily activities and promotes new social programs to promote reelection. Almost half of the spending done by the US government goes to entitlements (Medicare, Medicaid, social security). If any cuts are carried out in this sector, you can expect riots on the street (approximately 28% of the US population are baby boomers and 80% of investments and laws are carried out by this powerful demographic.) Cuts to entitlements are highly unlikely!

The continuous debate on raising the debt ceiling is all about a government mismanaging its money and not being able to control it–much like a child with no discipline. Since debt is being mismanaged, it has caused many distortions in the markets, and yet the debt is allowed to grow because of the US Congress. The debt ceiling has been increased 10 times since 2001. If the debt ceiling were actually a ceiling, the market and debt distortions would have imploded the economy–an implosion necessary for the economy to restore its equilibrium and liquidate all inefficiencies.

“Too big too fail” is absolute nonsense.

Paying back investors, costly wars, entitlements and bailing out the “financial terrorists” (who caused the crisis) all add to the national debt and to the dysfunctional economy that continues to operate until its debt will cease to grow. The problem with this system is that it created significantly more credit (someone is the creditor to all the debt) than “cash” money (money in your wallet). Every time debt expands, the credit supply also expands. (Read Fractional Reserve Lending on how money is created.)

The result to our economy is that “boom” periods are hardly driven by cash money, as cash money is insignificant in relation to credit. Credit is what drives the markets, and it is this same credit that “busts” the markets as well, in times of credit contraction. In order for debt to expand, someone must be lending the US this money. At the moment, the lenders are China, Japan, and the OPEC countries.

But why do they continue to buy this debt?

Because they have too.

The US Dollar is the reserve currency of the world. You need it to buy oil, a vital component of any economy. Since other countries like China cannot print US dollars at their leisure, they have to get it from somewhere. They get it from trade with the US. The US buys products in Asia and the rest of the world with US dollars, and in turn these same dollar surpluses are used to buy oil and US bonds, creating a much needed artificial demand for US dollars.

This is also how the enormous US 558$ billion trade deficit in 2011 was financed. The US has been in a trade deficit since the 1980′s and it continues the grow as jobs and manufacturing are being lost to more competitive nations. The trade deficit also accounts for the national debt. The financing of the debt creates artificial demand for US bonds which helps lower the interest rate and coincidentally helps to raise the debt levels even higher.

The table below shows the leading foreign holders of US debt, which are China and Japan, followed by the OPEC countries. These are the main financiers of the US trade deficit. 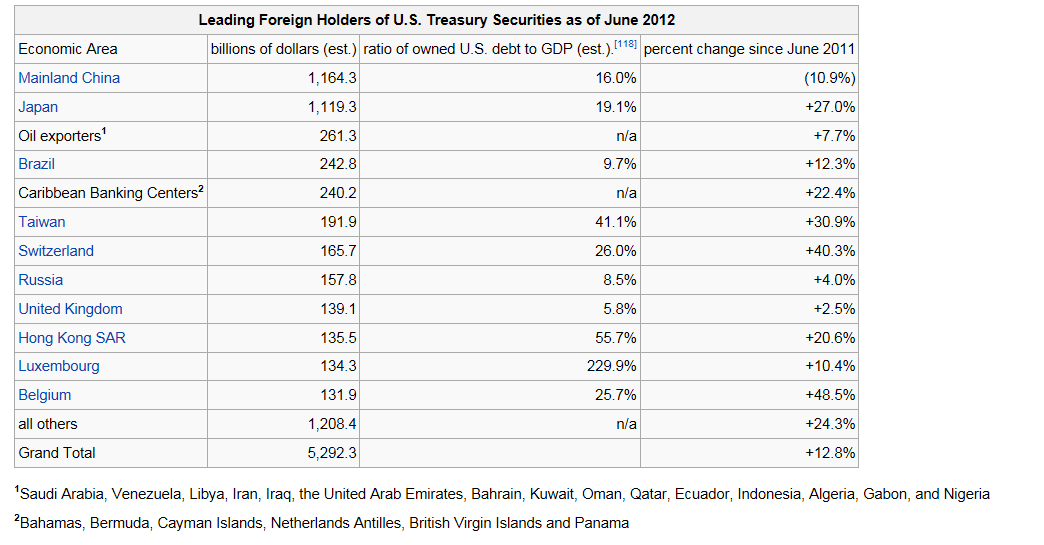 But here is the Achilles’s heel for the US debt scheme:

William R. Clark’s excellent book, Petrodollar Warfare, treats this issue precisely, going in depth into the Petrodollar collapse and how the US maintains its dollar supremacy with its current imperialistic foreign policy. This gem of a book is a definite read for anyone wanting to know how the US truly maintains its power on the world stage.

Undoubtedly, the extent of US debt would never have been possible had the US dollar not been the reserve currency and had there been less favourable global trade policies to provide a channel for the distribution of dollars. (You can also read more about the Petrodollar here.)

Why must the debt grow every year?

To keep the debt-servitude paradigm going. To increase economic activity in a country operating in this type of system, you need to increase the level of credit and thus debt grows in tandem. This is self serving: if debt is the “fuel” to increase economic activity, interest payments will become larger and larger, until eventually it reaches a point where debt can no longer be increased. This point is known as the Minsky moment–when there is no net benefit to extra debt.

Adding debt, both public and private, creates an environment of servitude among the population while the banks are generating extra profits. Through their lobbyist groups, the financial terrorists create favourable laws to keep people enslaved with debt.

Real estate, for instance, is a heavily subsidized investment; such subsidies entice people to purchase real estate and as a result, people are unwittingly working for the banks. In a real free market, people save money for a purchase.

The word “save” is becoming archaic in this debt servitude paradigm, a paradigm that was build on sand and cards and that can and will eventually collapse. The foundation, of course, is confidence in the US dollar.

So there we have it, in our “creditopia” world, if debt does not expand, the economy cannot grow and jobs cannot be created. In order to increase debt, foreigners have to continually finance the ever growing debt by purchasing government bonds and selling consumer products to the US. In turn, the US must increase the level of consumption, decrease savings, and eliminate the threat of any nation posing a risk to the US dollar hegemony. Is this a symbiotic or a parasitic relationship? Is is certainly a relationship that cannot grow forever. It poses an economic risk for ALL nations due to the interconnectedness of the global economy.