Faber To Shiller: “You Keep Your U.S. Dollars And I’ll Keep My Gold”

Faber To Shiller: “You Keep Your U.S. Dollars And I’ll Keep My Gold” 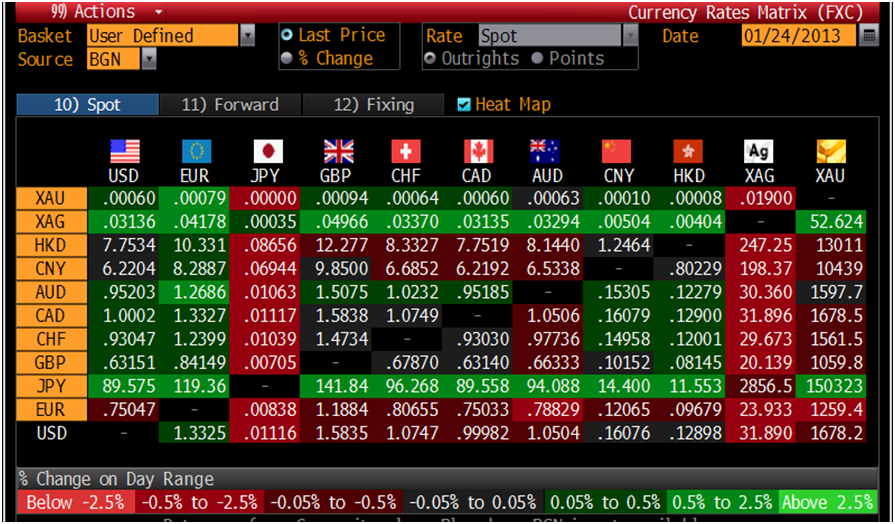 Gold edged down in most currencies on Thursday, easing off the one month high hit earlier in the week. More speculative players may be taking profits after the recent run from $1,625/oz to over $1,695/oz or 4.3%.

It is noteworthy that while gold is weaker in most currencies today it is again higher in Japanese yen as the yen has fallen sharply on the international markets due to concerns that the yen will be devalued in the coming months.

Bloomberg reported that Credit Suisse says gold holders may have withdrawn gold from the euro zone due to the region’s debt crisis. They noted the Bundesbank comment about capacity becoming available in its own vaults in Germany.

The World Economic Forum is into its second day in Davos, Switzerland, and with the theme of ‘Resilient Dynamism’ it appears a good time to announce or spin positive news in Europe such as a slight growth in consumer morale and confidence.

I’m not sure what Europe the Davos attendees are living on but Ireland, Spain, Portugal and Greece’s ‘recoveries’ are bleak at best.

Spanish youth unemployment has risen again and is now nearly at 60%.

The U.S. House of Representatives passed a Republican led plan to allow the federal government to keep borrowing money through mid-May.

The borrowing and money printing party can continue a little while longer but it would be prudent to prepare for the hangover.

Owning physical gold today is akin to drinking plenty of water and having a few pain killers to hand. When this party ends, those not owning gold are going to suffer one hell of a financial hangover.

“Everyone should keep gold in their portfolios” as the precious metal will be able to offer value to investors even in a worst-case scenario, said Marc Faber, the publisher of the Gloom, Boom & Doom report.

“In the worst case scenario, in the systemic failure that I expect, it would still have some value,” Faber, who is also the founder and managing director of Marc Faber Ltd., said today at an event hosted by Evli Bank Oyj in Helsinki.

Faber said his outlook was so bleak that he is “hyper bearish”. He joked that “sometimes I’m so concerned about the world I want to jump out of the window.”

He wisely said that `I advise everyone to have some gold.'

Faber said that he thought there could be a flight out of cash and overvalued bonds and into equities and gold.

In response to a question from Yale University’s Robert Shiller querying the recommendation to hold gold, Faber said: “I’m prepared to make a bet, you keep your U.S. dollars and I’ll keep my gold, we’ll see which one goes to zero first.”

Shiller, who is the co-creator of the S&P/Case-Shiller index of property values, responded "I'm inclined to think gold prices after this crisis might return to a lower level. Given the low yields of the alternatives [ie, bonds], the valuation of the stock market doesn't look so bad."

Faber, whose advice has protected millions of investors in recent years, warned of a global systemic crisis possibly due to massive size of the global derivatives market which is now worth over an incredible $700 trillion.

He warned “when the system goes down,” and only plastic credit cards are left, “maybe then people will realize and go back to some gold-based system.”

What's Going To Happen To The Price Of Gold And Silver In 2013?

Join two experts - Money Week columnist, Dominc Frisby and GoldCore's Head of Research, Mark O'Byrne for a one hour webinar as they discuss the outlook for gold and silver in 2013.

How Far Up Could Silver Go? - Minyanville