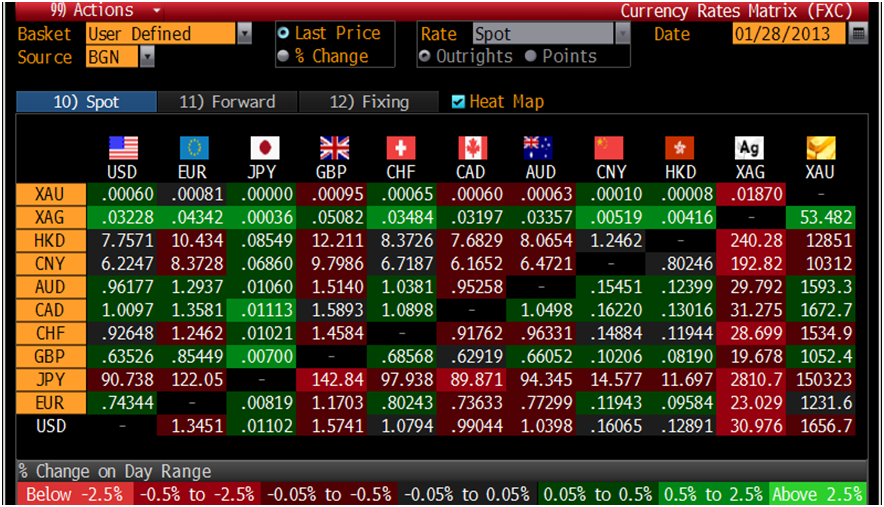 European banks will repay more than 130 billion euros of crisis loans to the European Central Bank next week, making payments earlier than expected.

European leaders still warned although the single currency has stabilized the crisis in Europe has not abated, noting it will take years to recover and highlighted the mass unemployment on the continent. The euro is now on an eleven month high verses the U.S. dollar.

The U.S. CFTC numbers for the week finished January 22nd show that net long bets were raised for gold and silver.

The Standard & Poor's 500 Index closed above 1,500 for the first time in over 5 years on Friday on strong U.S. earnings reports, including Procter & Gamble's, helped the benchmark extend its rally to 8 days.

Russia, Kazakhstan and Turkey expanded their gold holdings in December, seeking to diversify their foreign reserves and protect from currency devaluation risk.

Russian gold holdings climbed 2.1% to 957.8 metric tons or 30.793 million ounces, according to data on the International Monetary Fund’s website.

The Russian central bank has said that they will continue buying gold. The pace of the purchases may vary, First Deputy Chairman Alexei Ulyukayev told reporters this month.

Kazakhstan’s gold reserves expanded 1.7 percent to 115.3 tons or 3.707 million ounces last month, and surged 41% over the year, the data showed.

Turkey’s holdings jumped 14.5% to 359.65 tons last month, according to the IMF data. The amount has increased due to it accepting gold in its reserve requirements from commercial banks.

Philippines gold reserves fell 1% in November from October while Mexico’s holdings were down 0.1 percent in December to 4.004 million ounces, according to the IMF.

Iraq cut its gold holdings by a quarter to 29.9 tonnes in November, reversing some of the country's recent efforts to bolster its reserves.

Countries bought 373.9 tons in the first nine months of last year, according to the producer-funded World Gold Council, which said in November that full-year additions for 2012 would probably be at the “bottom end” of a range from 450 to 500 tons. Central banks purchased 456 tons in 2011.

Central bank diversification will continue to give long term support to gold.

Tightness in the platinum and palladium markets has begun to see prices move higher.

Palladium reserves in Russia, the world’s largest producer of the metal, are “pretty much exhausted” and sales this year may be only 3 metric tons, according to Johnson Matthey Plc.

Shrinking Russian stockpiles at a time when output is falling helped send the metal into the biggest shortage in 12 years.

Output in South Africa, the second-biggest producer, was disrupted by labor disputes and strikes, while lower grades contributed to a decline in Russia.

Palladium for immediate delivery has risen again today and is trading at $741/oz. Palladium, last quarter’s best-performing precious metal, has risen 5.4% this year after advancing 7.5% in 2012.

Palladium supply declined 12% in 2012 to 6.48 million ounces on the South African disruptions.

Platinum supply dropped 10% to 5.68 million ounces because of declines in top producer South Africa, coming to less than the 5.84 million ounces forecast in November, according to Johnson Matthey.

Zimbabwe was the only major producing nation to increase output, Duncan said.

Platinum supply probably will be curbed further because of difficulties in South Africa, while auto catalyst demand is expected to stay “flat” this year, before a “much stronger” 2014, according to JM.

$80 Million Worth of Gold Flown Out; Officials Tight-lipped – Ghana Web

How to profit from a plummeting pound – The Telegraph

Sinclair: Defend Yourself By Not Giving In – JS Mineset