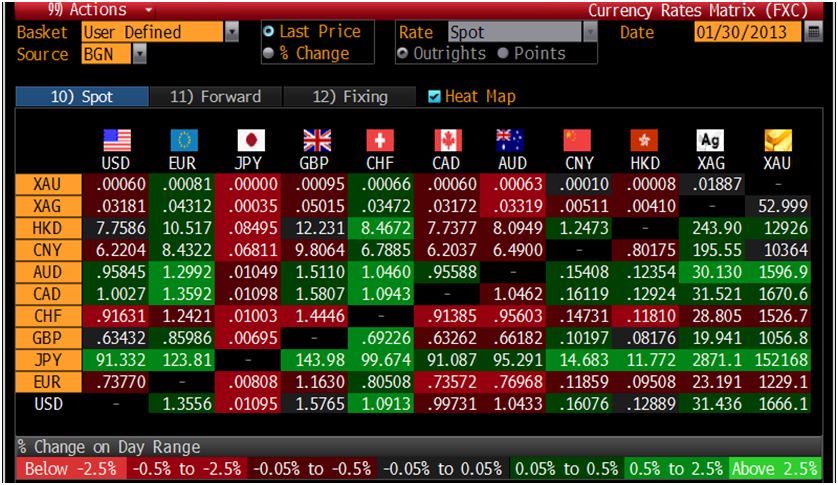 Gold managed to hold firm after recovering from a 4 day slide on the likelihood that the U.S. Fed will continue with its ultra loose quantitative easing policy.

The U.S. FOMC is expected to confirm in a statement at 1915 GMT that it will continue the $85 billion in monthly bond purchases until unemployment rates drop significantly. Even though some Fed officials and many market participants have expressed concern over the side effects from such measures.

The U.S. nonfarm payrolls data expected on Friday will give a closer look at the labour market.  A poll of economists by Reuters shows that they expect U.S. unemployment to be unchanged from last month at 7.8%.

Climbing oil prices continue to stir investor worries about inflation.  Brent crude hit a 3 month high in the prior session.

Silver jewellery exports from India are projected to rise to 30% this year as world demand grows, noted the India's Gems and Jewellery Export Promotion Council.

American Eagle silver coin sales in January surged to an all time monthly high. The U.S. Mint recently resumed sales after huge demand led to a lack of inventory and created a temporary suspension of sales.

As of January 29, Silver Eagle sales for the month were 7.1 million ounces, data from the U.S. Mint's website showed, surpassing its previous record of 6.1 million ounces set in January 2012.

Reuters reports that “huge quantities” of silver bullion coins were being bought by investors, including entire monster boxes full with 500 1 oz bullion coins sealed by the US Mint.

Swiss banks, UBS and Credit Suisse, have moved to offer allocated gold and silver accounts to their clients – including high net worth, hedge funds, other banks and institutions.

The move allows these entities to take direct ownership of their bullion in allocated accounts.

According to the Financial Times, the banks say that they are making the move in order to reduce exposure and risks on balance sheets and in an effort to be more transparent.

“Under more common "unallocated" gold accounts, depositors' bullion appears on the banks' balance sheets, forcing them to increase their capital reserves. Like their global peers, UBS and Credit Suisse are under pressure from regulators to reduce capital-intensive activities ahead of the introduction of new Basel III global banking rules.”

It is more likely that the banks made the move to allocated storage due to an increased preference from their investors who are weary of continuing systemic risk.

We have spoken and written about this trend for some time.

In recent months there has been a definite change by our clients and by bullion owners internationally from owning gold and silver in unallocated accounts, to owning bullion coins and bars in allocated and segregated accounts.

Investors who were unwilling before to pay annual storage fees on allocated accounts are now willing to pay the extra cost. This is due to increased awareness and concern about systemic risk and a preference for owning gold directly and eliminating counter party risk.

Indeeed, we and other bullion dealers who offer allocated storage outside the banking and financial system have seen flows out of bullion banks unallocated gold account offerings and into allocated accounts such as with Perth Mint and Via Mat.

Allocated and segregated storage costs more money as more space is required in vaults and there is a higher insurance cost. Banks have realised that there is a preference to own allocated gold and are moving to offer that. They may also be able to make a small margin on the annual storage fee, in and above, the cost of storage to them.

The move by the Swiss banks is a reactive one in order to prevent the loss of clients who are concerned about systemic risk and want to own bullion in the safest way possible.