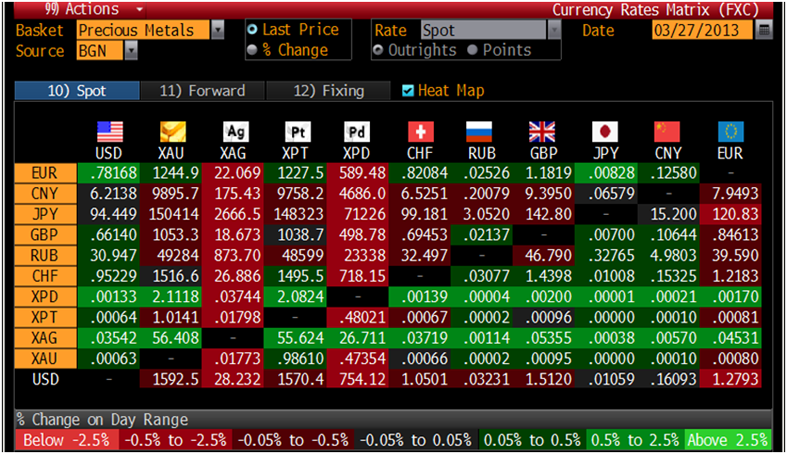 Gold is slightly lower in most major currencies this morning but is higher in euros and Swiss francs.

Gold appears to be consolidating near the $1,600/oz level and worries about the euro zone's fiscal health are supporting prices as is the EU’s unprecedented expropriation of bank deposits in Cyprus.

There are hopes that Cyprus will complete capital control measures today to prevent a run on the banks by rightfully nervous depositors.

Russia and South Africa, which together control about 80% of the world’s reserves of platinum group metals, plan to create a trading bloc similar to OPEC to control the flow of exports according to Bloomberg.

South Africa mines about 70 percent of the world’s platinum, while Russia leads in palladium, a platinum group metal used in autocatalysts, with about 40% of output, according to a 2012 report by Johnson Matthey Plc.

Palladium rose 0.8% yesterday to $763.50 after Donskoy’s comments, reversing declines to reach the highest level since March 18. Platinum, used to make jewelry and autocatalysts, has risen 2.3% this year because of increased demand from the auto industry and after supply disruptions at mines. The price jumped yesterday in the hour after Donskoy’s comments, narrowing yesterday’s decline.

South African Mines Minister Susan Shabangu confirmed that the two countries aimed to counter oversupply of platinum, and said possible measures could include taxes and incentives.

“We’re not really controlling the market,” she said in an interview in Durban. “We want to contribute without creating a cartel, but we want to influence the markets.”

Other producers will be invited to join the bloc, which will be similar to the Organization of Petroleum Exporting Countries, Donskoy said. The aim will be to open up new markets rather than limit exports, he said.

Zimbabwe, Canada, and the U.S. are among other major platinum group metals producers.

Russian and South African officials signed a memorandum of understanding today to cooperate in the industry.

“We are now forming working groups to work out joint actions on this market,” and aim to coordinate export volumes, Donskoy said. “There will be a meeting in the summer to discuss mechanisms in detail.” 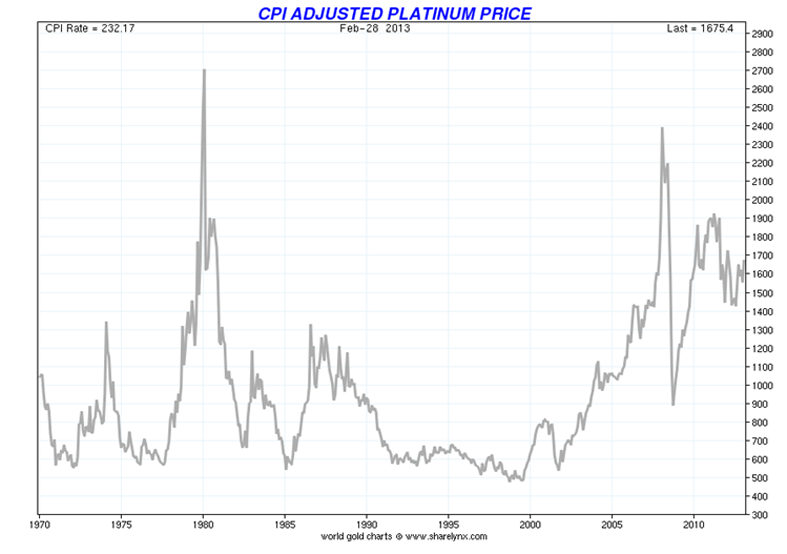 We believe that due to the very favourable supply demand dynamics in the platinum market, it should rise well above the inflation adjusted record high from 1980 at $2,700/oz in the coming years from $1,571/oz today.

While gold is down about 5% this year and silver down about 6.5%, palladium is up 7.9% and platinum up 2.2% showing the diversification benefits of having an allocation to the PGM metals.

Whom to Believe on Gold: Central Banks or Bloomberg? – Casey Research