Minutes from the U.S. Fed’s 20th of March meeting were released early yesterday due to an early exit by Congress yesterday afternoon.  The minutes reported the following:

“thought that if the outlook for labor market conditions improved as anticipated, it would probably be appropriate to slow purchases later in the year and to stop them by year-end.” … “Two members indicated that purchases might well continue at the current pace at least through the end of the year. It was also noted that were the outlook to deteriorate, the pace of purchases could be increased.” 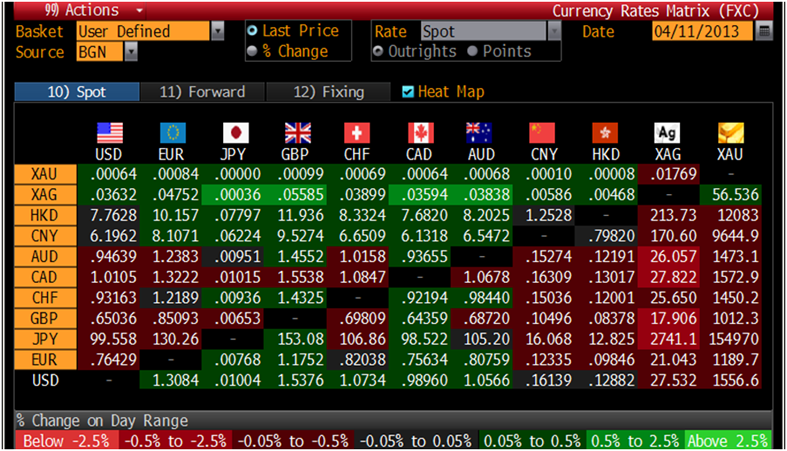 In Europe, Cyprus has denied the plan to sell its very small gold reserves of 13.9 tonnes as a contribution to an international bailout.

Were the sale to happen it would be unlikely to set a precedent for other troubled Eurozone countries as these nations now greatly value their gold reserves as important stores of value that will protect against currency devaluations.

The Central Bank of Cyprus (CBC) said last night however that selling the island’s gold had not been on the table.

Stylianou added that sale of the gold was a matter handled exclusively by the CBC board.

A spokesperson for the Central Bank of Cyprus told the Cyprus News Agency (CNA) that reports of the $523 million gold sale have not been, “raised, discussed or debated,” with the bank’s board of directors.

The Central Bank of Cyprus denied the gold sale after reports on Reuters said that Cyprus officials had agreed to sell around 400 million euros in excess gold reserves to contribute to the country's bailout. Stylianou, the spokesperson for the Central Bank of Cyprus said that the gold sale was, “never discussed nor are there current or future plans to do so on the board’s agenda.” Reuters based its story on a draft report from the European Commission which assessed the nation's financing needs.

News of Cyprus’ planned sale likely did not contribute to gold's weakness yesterday. The amount of gold is trifling both in dollar or euro terms versus the scale of debts in Cyprus and the wider Eurozone and in terms of tonnage. At just 13.9 tonnes the Cyprus gold reserves is equal to one week's gold demand from Chinese people. 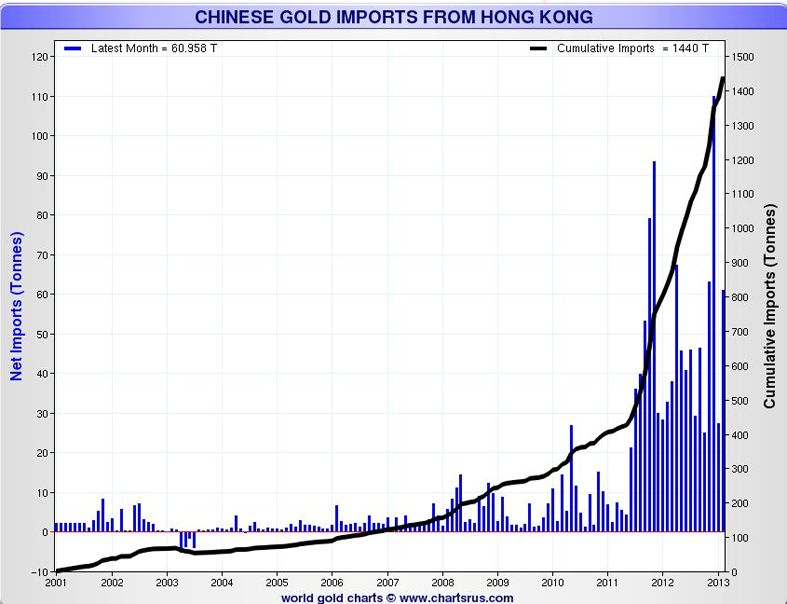 Gold imports by China from Hong Kong jumped 89% in February as lower prices led to an increased demand for gold. Chinese buyers purchased 97 metric tons of gold in January alone and the news of the demand was barely covered in the media and led to no impact on the gold price.

Desperate people and nations around the world are being forced by circumstance to sell their gold while creditors are continuing to accumulate gold.

Cyprus to dive into its gold reserves - CNN

Cyprus To Sell €400 Million In Gold, About 75% Of Its Total Holdings, To Finance Part Of Its Bailout – Zero Hedge

Visualizing The "Real" Value Of Everything – Zero Hedge