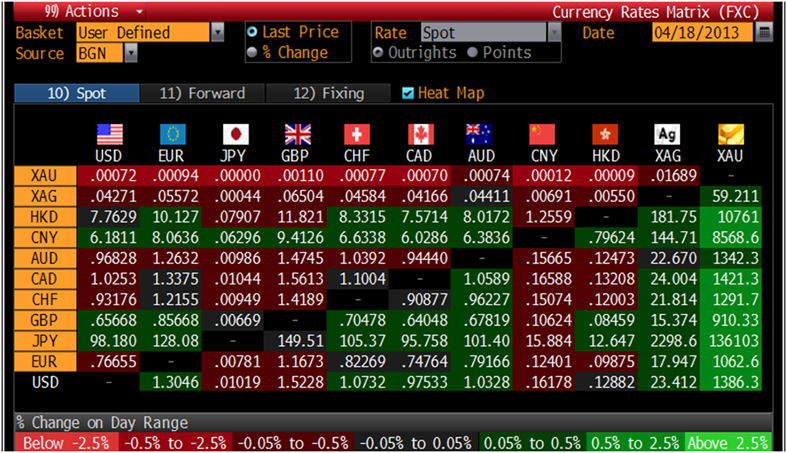 Lower gold prices have led to a rush to buy gold coins and bars globally. Value investors and store of wealth buyers are more than happy to exchange devaluing paper currencies for physical gold at these much cheaper prices.

It is ironic that manipulative selling by a large hedge fund or bullion bank may have ignited a mini gold rush globally.

US Mint data shows that a record 63,500 ounces, or a massive 2 tons, of gold were sold on Wednesday (April 17th) alone. This means that total sales for the month of April have surged to a significant 147,000 ounces. This is more than the previous two months combined with just half of April gone. 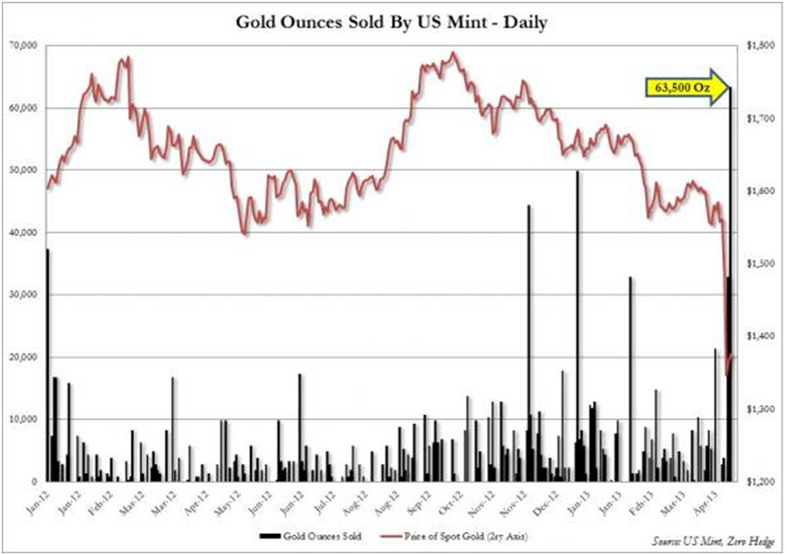 Similar strong demand is being seen throughout Asia and in western markets. We saw more buying than selling again yesterday and most of the selling was of small orders, less than fifty ounces, while buy orders were lumpier and from high net worth clients.

Demand is again particularly strong in India as Indian consumers are buying gold jewelry, coins and bars in record numbers which will boost gold imports this quarter as traders and banks run out of gold bullion inventories.

Overseas purchases may jump 36% to 305 metric tons in the three months ending June from 225 tons a year earlier, Mohit Kamboj, president of the Bombay Bullion Association Ltd., said in a phone interview with Bloomberg.

Imports may climb as much as 20% this month from year earlier, he said.

Buyers are flocking to jewelry stores and bank outlets to buy ornaments, coins and bars ahead of India’s main wedding and festival seasons after gold slumped to a two-year low.

The Commodity Futures Trading Commission (CFTC) is looking at the role of market speculators, CFTC Commissioner Bart Chilton told Bloomberg TV overnight after gold futures on Monday suffered their biggest one-day decline since at least 1983. Some have said that it was the largest decline ever.

The CFTC may take a deeper look into the price of gold following Monday's price plunge. Democratic CFTC Commissioner Bart Chilton told Bloomberg TV today that the drop doesn't necessarily mean "anything nefarious" happened but whenever something like this happens "we got to look at it."

“When you see such sharp move that is obviously something that raises our concern and we look at the trades and see what is going on,” he said.

Regulators must look out for end-users first and ensure markets perform “properly”.

The CFTC is already scrutinizing whether gold prices are being manipulated in London by a handful of banks who meet two times a day to set the spot price for a troy ounce of physical gold. The CFTC said in March that it is looking at issues including whether the setting of prices for gold—and the smaller silver market — is transparent and if it is fixed.

The $20 billion gold futures sale and concentrated selling of gold futures on the COMEX on Friday and Monday is far more likely to be “nefarious” than the gold fixings in London.

The CFTC’s track record to date has not been great and regulatory capture remains a real risk with the CFTC seeming to be reluctant to hold Wall Street banks who may be involved in price manipulation in the futures market to account.

After the Libor revelations, it is surprising that there is not more scrutiny and hard questions asked of banks and regulators in this regard.

Separately, large institutional fund manager Blackrock said that there was “no visible central bank activity” as the gold price plunged.

They said that gold's fundamentals remain strong and that the fall in price was driven by an outflow of "hot money" and that gold prices are now near the marginal cost of new supply which should provide strong support at these levels and lead to higher prices again.