19 Reasons To Be Deeply Concerned About The Global Economy

Submitted by Michael Snyder of The Economic Collapse blog,

Is the global economic downturn going to accelerate as we roll into the second half of this year?  There is turmoil in the Middle East, we are seeing things happen in the bond markets that we have not seen happen in more than 30 years, and much of Europe has already plunged into a full-blown economic depression.  Sadly, most Americans will never understand what is happening until financial disaster strikes them personally.  As long as they can go to work during the day and eat frozen pizza and watch reality television at night, most of them will consider everything to be just fine.

Unfortunately, the truth is that everything is not fine.  The world is becoming increasingly unstable, we are living in the terminal phase of the greatest debt bubble in the history of the planet and the global financial system is even more vulnerable than it was back in 2008.  Unfortunately, most people seem to only have a 48 hour attention span at best these days.  They don't have the patience to watch long-term trends develop.  And the coming economic collapse is not going to happen all at once.  Rather, it is like watching a very, very slow-motion train wreck happen.

The coming economic nightmare is going to unfold over a number of years.  Yes, there will be moments of great panic, but mostly it will be a steady decline into economic oblivion.  And there are a lot of indications that the second half of this year is not going to be as good as the first half was.

The following are 19 reasons to be deeply concerned about the global economy as we head into the second half of 2013...

#1 The velocity of money in the United States has plunged to an all-time low.  It is extremely difficult to have an "economic recovery" if banks are not lending money and people are not spending it... 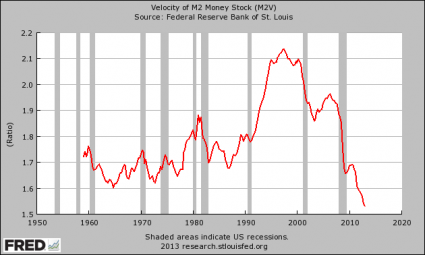 #2 The fall of the Egyptian government threatens to bring even more instability to the Middle East.  In response to the events in Egypt, the price of oil rose to more than 101 dollars a barrel on Wednesday.

#3 Every time the average price of a gallon of gasoline in the United States has risen over $3.80 in the past three years, a stock market decline has always followed.

#4 As the world becomes increasingly unstable, massive citizen protest movements have been rising all over the globe...

The protests have many different origins. In Brazil people rose up against bus fares, in Turkey against a building project. Indonesians have rejected higher fuel prices, Bulgarians the government’s cronyism.

In the euro zone they march against austerity, and the Arab spring has become a perma-protest against pretty much everything. Each angry demonstration is angry in its own way.

#5 The European sovereign debt crisis is flaring up once again.  This time it is Portugal's turn to take center stage...

From Greece to Cyprus, Slovenia to Spain and Italy, and now most pressingly Portugal, where the finance and foreign ministers resigned in the space of two days, a host of problems is stirring after 10 months of relative calm imposed by the European Central Bank.

Portuguese Prime Minister Pedro Passos Coelho told the nation in an address late on Tuesday that he did not accept the foreign minister's resignation and would try to go on governing.

If his government does end up collapsing, as is now more likely, it will raise immediate questions about Lisbon's ability to meet the terms of the 78-billion-euro bailout it agreed with the EU and International Monetary Fund in 2011.

#6 It is being projected that Italy will need a major EU bailout within six months.

#7 Bond investors are starting to panic.  In fact, even prominent firms such as Pimco are seeing investors pull massive amounts of money out right now...

In June, investors pulled $9.6bn from Bill Gross’s flagship fund at Pimco, the largest single month of outflows at the fund since Morningstar records began in 1993, the investment research firm said.

The outflows came after investors pulled $1.3bn from the fund in May, which marked the first outflows since December 2011.

Overall, a whopping 80 billion dollars was pulled out of bond funds during June.

#10 We continue to buy far more from the rest of the world than they buy from us.  The U.S. trade deficit for the month of May was 45.0 billion dollars.

#11 The severe drought that the western half of the United States is suffering never seems to end.  What will it do to food prices if ranchers and farmers out west have to go through another summer like they did last year?

#13 Unemployment in the eurozone is at an all-time high.

#14 Could the paper gold Ponzi scheme be on the verge of crumbling?  There are reports that there is now a 100 day delay for gold owners to take physical delivery of their gold from some warehouses owned by the London Metal Exchange...

We’re told that bullion-buyers in London must now wait more than 100 days to take delivery of the bullion for which they have already paid.

The comedic drones at Bloomberg, and officials of the London Metal Exchange itself would have us believe this is due to “warehouse queues.” While precious metals bulls undoubtedly appreciate the imagery implied of a 100-day line-up of armored cars waiting to load their bullion – in the middle of this “bear market” – the implication is fallacious.

In an era of just-in-time inventories; the notion that there can be a 100-day backlog to load bullion into armored cars with the metal already sitting in the warehouse is ludicrous. Clearly what the LME is really reporting here is a greater-than-three-month delay to refine the gold (or silver) being purchased here – and then ship it to their warehouse.

In other words, the “bullion” which traders believe they are purchasing today is in fact merely ore which hasn’t even been dug out of the ground yet.

#15 The number of mortgage applications in the United States is falling at the fastest rate in more than 3 years.

#16 Real disposable income in the United States is falling at the fastest rate in more than 4 years.

#17 The percentage of companies issuing negative earnings guidance for this quarter is at a level that we have never seen before.

#18 Is the dark side of derivatives trading about to be exposed?  EU officials claim that 13 major international banks have been colluding to control the trading of derivatives...

The European Commission says many of the world's largest investment banks appear to have colluded to block attempts by exchanges to trade and offer more transparent prices for financial products known as credit derivatives.

The commission, the executive arm of the European Union, said Monday it has informed 13 banks — including Citigroup, Goldman Sachs, JPMorgan and Morgan Stanley — as well as the industry association for derivatives itself, the International Swaps and Derivatives Association, ISDA, of the preliminary conclusions of an investigation that began in March.