This article posted a few days ago struck me as interesting, as it seemed so counter-intuitive that I thought it worth a look.

On the basis of weekly charts of gold and the US dollar index over the past five years, Charles Hugh Smith concludes there is no correlation. And at first glance, there seems much to support his view.

The principal argument (as I have never been a believer in peaks and troughs) is his second point--that there are at least three significant intervals where gold and the US dollar rose in tandem since late 2008.

Over the past few years I have attempted to show that most economic data are nonlinear and best studied by methods suitable for complex systems. Such systems are not easily analyzed using methods like linear regression or fourier analysis. In fact I would go so far as to say that such methods can lead you to the wrong conclusions.

The world's situation is complex and changing. Change can drive unpredictable variations in market preferences--so while it would seem logical that people's preference for US dollars and gold might normally vary inversely, perhaps there are some circumstances when the market equally seeks both.

We consider a scatter plot of USDX vs gold (weekly) from January 2007 to the end of last month. 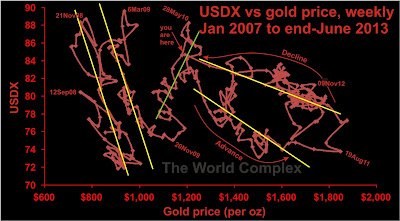 The gold price appears to be far more sensitive to the USDX in the second phase of negative correlation compared to the first phase; by which I mean that a small change in USDX correlates to a much larger change in gold price presently than was the case before mid-2009.

From a dynamics perspective, I would argue that the three areas of the graph represent different "states" of the (US? world?) economy. Finding the triggers for changing from one operational state to another is of key importance.

I expect we will continue to see relatively large fluctuations in the price of gold relative to changes in the USDX.

It looks like the system will have to drop down to the lower line before a steady advance in the gold price. If so, we would see a small, sharp drop in USDX without movement in the gold price, prior to a major move in gold (up) and the USDX (down).