Submitted by Jim Quinn of The Burning Platform blog,

What could possibly go wrong?

How the Fed could cause another 1987 crash

Stock market investors continue to ignore one of the biggest, fastest jumps in long-term interest rates on record.

Yes, the Dow slipped below 15,000 this week, but it remains near its long-term peak — despite the harrowing plunge in the bond market in the past couple of months, which has sent rates surging. 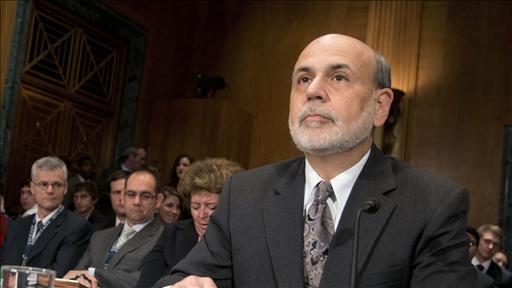 The Federal Reserve’s July policy minutes sent markets on a ride Wednesday afternoon. Steve Russolillo joins The News Hub with a look at the market’s confused reaction as it hedges when the central bank will begin tapering.

Indeed, I suspect one reason the stock market has risen is that some naive investors have calculated that they can be safe by “rotating” out of bonds and into stocks.

I sat down this week with one of the most experienced bond market gurus I know. When I asked him for his advice, he first suggested — only half jokingly - “panic.”

His second bit of advice? Keep calm and carry on. His wife just bought him a large “Keep Calm and Carry On” poster and had it framed. He’s going to take it into his office and hang it “where all the traders on our bond desk can see it.” We are, he believes, in an era of rising interest rates, and they’ll continue to rise much further than most people realize.

He concedes that that’s only his guess, of course.

But here’s what we do know.

At the start of May, someone buying a new home with a $200,000 mortgage was locking in monthly interest costs of $566. Today, thanks to the surge in mortgage rates, someone making the exact same purchase will have to pay $766 a month in interest.

It’s easy to be fooled by the low absolute level of interest rates into thinking these are small moves. Rates are “only” up by 1% or 1.5%, after all. But actually these are huge moves, because they come from a low base. Mortgage costs are up about a third in a short period, from 3.4% to more than 4.4%. Uncle Sam’s cost of 10-year money has rocketed by 80%.

Traders continue to focus on the minutiae of Federal Reserve minutes and the timing of the Fed’s likely moves in the bond market. Ordinary investors should focus on the bigger picture. The Fed has announced that the era of quantitative easing, and aggressive manipulation of long-term interest rates, is coming to an end. We are due to move, sooner or later, back to an era of “normal” interest rates. Typically, that would mean 10-year Treasury rates about two percentage points above expected inflation, meaning today’s 2.88% yield would become more like 4.5%.

Not to belabor the point, but when Uncle Sam has to pay 4.5% for 10-year money, he will be paying almost three times the interest he was paying at 1.6%.

At the very least, you had better understand the risks - of stocks, and not simply of bonds.

Rising interest rates will hit everything from car loans and credit card borrowers to closed-end investment funds, many of which have artificially goosed their yields with leverage. They borrow money at short-term rates and invest it at long-term rates. That has looked good for the past few years. It won’t look so good if the process reverses.

This surge in borrowing costs comes in an economy more in debt than any in history. It’s not just Federal debt and mortgages, either. Consumer credit - ignoring mortgages - is up to $2.8 trillion, according to the Federal Reserve. In 2007, at the height of the “credit bubble,” it was just $2.5 trillion. U.S. businesses owe $12.9 trillion - compared with $11 trillion in 2007.

The future is unknown, of course, and I am acutely conscious of Peter Lynch’s famous dictum, that an individual investor will probably lose more money fearing a stock market crash (over time) than he or she will likely lose in a market crash. Nonetheless, we do know that borrowing costs have surged, and if history is any guide, they have quite a bit further to rise. And we know how indebted the system has become.

People forget that the infamous 1987 stock market crash followed a surge in bond rates. In the months leading up to the October crash, the interest rate on 10-year Treasurys jumped about 45%, compared with the 80% hike we’ve just seen.

I asked my bond market guru over lunch what the risks were that the latest surge in interest rates could precipitate an ’87-style crash. “Quite significant,” he said.