No matter how hard the Washington crowd tries to sell an economic recovery, inconvenient and contrary facts keep rearing up to shatter their mythmaking. Few people any longer believe the claims of declining unemployment or low inflation at least based on purchases they make.

Rising interest rates are blamed for the housing reversal.  As the late Gilda Radner would have said: “it’s always something.”

The recession, declared over in June 2009, never ended. Over four years later there has been no meaningful sign of a recovery. In spite of unprecedented government and Federal Reserve stimuli, the economy has barely budged  These actions have only masked the true condition of our economy and will make us poorer in the future.

Some wonder how bad the recession/depression might have been had government not acted. Others worry that we will find out when the Fed tapers.

What is Going On?

Newspapers and the economic cacophony emitted by pundits and political hacks only confuse the average person as to what is really happening.

Rising interest rates, the reason given for weakening housing, provide a convenient and plausible excuse. But explaining complex economic issues rarely can be answered by citing a single variable. Such an answer is simplistic and begs the more fundamental question of why interest rates are rising now. Addressing this issue does not lend itself to snappy sound bites. Furthermore, it leads into complex relationships that few are able or willing to follow.

An unwillingness to explore these more complex issues is just fine from the political standpoint. They lead to a  host of inconvenient and embarrassing issues regarding Washington’s mismanagement of the economy. The also enable economists to leap into the weeds of their particular jargon, theory, empirics and political leanings regarding the economy.

Let’s keep this discussion simple, which can be done by assuming away some of the noise and complexities like economists are wont to do. Let’s assume away economics and economists for the moment. Let’s pretend that neither exists and try to take a common-sense approach to the economic problems of the country.

As an economist, I think it worthwhile so that others, untrained in this so-called discipline, may better understand the simplicity of what ails the country. The pejorative “simplistic” is one hurled usually by people trying to protect their turf by using smokescreens.

The reason why the economy is not recovering and will not recover can be explained in five simple points:

The golden goose has grown old and tired. It no longer has enough capital to achieve the performance of the past. The country is poorer than it should be as a result. Washington’s policies, interventions and disincentives are making it poorer still. These policies help Washington and its cronies. They lower the standard of living of the rest of the country.

Wealth (capital) enables economies to grow. It is the primary requisite for a rising standard of living. It provides the means to work less and have more. Workers are made more productive and achieve higher earnings. The well-known socialist economist Joan Robinson begrudgingly admitted to that fact at the height of Keynesianism and the intellectual attraction to socialism when she said the following of capitalism (my emboldening):

The system is cruel, unjust, turbulent, but it does deliver the goods, and, damn it all, it’s the goods that you want. Joan Robinson

Politicians do not want to discuss the economic problem in simple terms. They are the biggest beneficiaries of the welfare state which feeds their egos, desire for power and as a means to buy votes to retain office.

The golden goose upon which the horde of political parasites  feeds is not immune. It grows ever weaker and unproductive as a result of the predations. A decision must be made between two options: the Welfare State or the Prosperous State. There is no third way. The choice is to continue down this road to serfdom or to make a U-turn back toward prosperity.

Advanced stages of the welfare state will lead to its eventual demise. History is replete with governments that extended themselves beyond what their populations were willing or able to support. That is the point the US has reached. The so-called economic crisis did not begin in 2009 or even 2001. These were symptoms of the disorder and maladjustments that had been introduced into the economy years before.

We can continue down the current road and never see a return to economic vitality that was experienced only a few decades ago. Poverty, jobless and continued declines in the standard of living will increase. Ultimately the economy will collapse under its own weight or civil unrest will bring it down.

Or we can repeal much of the nonsense that has contributed to this problem and return  to the vitality, growth and rising incomes that characterized most of our history. That requires a massive reduction in government’s role in the economy and its spending.

These are the only choices that affect our destination. All other considerations are mere distractions and excuses. It is just that simple!

These comments are as relevant for the welfare states in Europe as they are the US.

The choice above will likely not be addressed until an economic tragedy renders our economy dysfunctional.

Before that occurs, a collapse of financial asset prices (stocks and bonds) is a probable next event. The timing of such a collapse is not reasonably predictable, but current asset price levels reflect Fed-created smoke and mirrors liquidity. This reinflated bubble will collapse just as the now deflating housing bubble has. What is certain is that something as irrelevant as rising interest rates will be blamed.

Without rollbacks in confiscations of wealth, harmful policies and the removal of perverse incentives, this country must continue to decline.

Why There Can Be No Recovery — Simple Supply and Demand

Individuals are adjusting their behavior to the new normal — a declining real standard of living. That means driving cars longer, downsizing homes, dining out less often, buying new clothes less frequently, etc. etc. These adjustments are all demand side. They are rational in a world where the standard of living is falling short of expectations. There is no short-term fix for this problem.

The supply side of the economy is not as easily rationalized. Commitments in the form of fixed investments and long-term debt are in place. As the country becomes poorer and demand shifts downward, the supply side is not easily downsized. Workers can be laid off as a partial adjustment, but many of the costs are fixed and not downwardly adjustable. The number of retail stores, dry cleaners, car dealers,  restaurants, malls and virtually everything else was built for a higher expected standard of living than is forthcoming. This supply must shrink to the level of demand. That process inevitably involves layoffs, closures and bankruptcies. 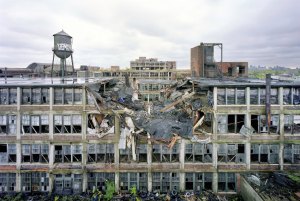 Many of the marginal businesses that held on through the first wave (2009) will not make it through the next one. The great Recession that policy analysts claimed was cured has yet to come. It will, it is unavoidable. 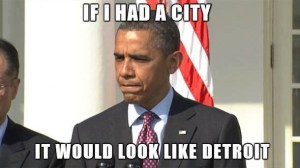 For lack of a better term, the process the entire country is headed for is “Detroitification.” The term represents a declining if not dying economy. Higher interest rates, “slow growth,” lack of innovation, worldwide slowdown or many other variables will be used to rationalize what is coming. The tragedy results from one cause and one only — the idiocy of our federal government and its greed.

At this stage, the damage is done and cannot be undone quickly enough to avoid this crisis. Even if there were time, there is no way that politicians would willingly address the problem.