Money is only as useful as to what it can purchase. The Fed has created a system where debt is now equal to money.  This is why big purchases like cars, housing, and even going to college are only feasible by mortgaging your future for many decades. Since the payments are broken down into tiny monthly installments many people pay little attention to the true cost of things over their lifetime. Yet, as MyBudget360 shows, over time, the U.S. dollar has lost a tremendous amount of purchasing power due to inflation. Inflation slowly eats away at your purchasing power yet having access to debt has given the middle class the false impression that they are still protected from the unraveling impacts of inflation. They are not...

As MyBudget360.com goes on to note,

Someone sent over a photo posted over on the popular Reddit website that shows the cost of living for people back in 1938.  You would think that people in 2013 would have more purchasing power than those living through the Great Depression.  Adjusting for inflation you would be surprised what has happened in the last 75 years.

The picture in question has prices for living from 1938.  It includes important items like a new home, income, new car, rent, and extreme purchasing examples like tuition for Harvard: 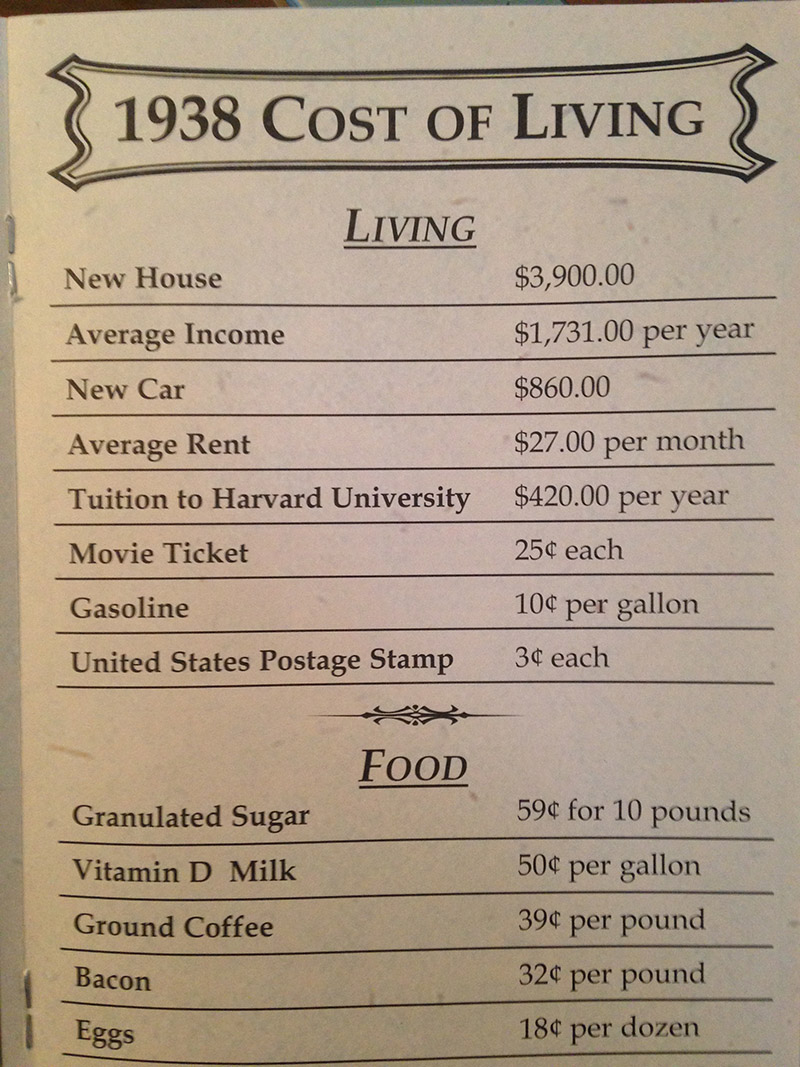 You can normalize costs over time through adjusting for inflation.  Back in 1938 a new home cost about two times the annual average income.  A new car was only about one-third the cost of the annual average income.  These figures are important because back in 1938, using credit was only a small factor in purchasing goods.  The middle class didn’t start blossoming until after World War II so you would expect that things were still tough for regular households.  What we find though is that compared to the typical income, buying a new home or buying a car was relatively doable for most households.

Now adjusting all these figures for inflation shows how much more expensive things have become and how dependent we now are to financing purchases with debt (created by the banking system):

This chart shows the impact of inflation and the declining purchasing power of the US dollar.

For example, a new home adjusting for inflation (using the BLS calculator) should cost around $64,597 per year.  The current cost of a new home?  $245,800.  The average income has stayed about the same normalizing for inflation (doesn’t say much since we are going back to the Great Depression here).  A new home today costs nearly 10 times the annual average income of a worker.  The two income trap has largely hidden this inflation since it now takes two households to accomplish what one income was able to do 75 years ago.  On top of that, people now need to go into massive debt just to purchase a home.

Take a look at the cost of a new car as well.  In 1938 a worker was able to purchase a new car with one-third of their annual income.  Today a new car is more expensive than the annual average income.  This is why in 2013 one of the top growing consumer debt sectors was with automobile loans.

If things stayed the same, the cost of attending Harvard for one year in 2013 would be closer to $7,000 per year (the current tuition is $54,496 per year).  It isn’t only Harvard charging incredibly high tuition around the country.  Of course the higher education bubble is one of the most pressing issues around creating a $1.2 trillion student debt market.

Rent, movie tickets, and even gasoline are much more expensive today adjusting for inflation.  This puts a heavier strain on the pocketbook of most Americans.  It also has created a dependency on debt.

We do have stronger safety nets so we don’t have the “in your face” poverty of the Great Depression.  Yet we still have close to 48 million Americans on food stamps.  The area that has seen prices become more affordable is with food.  This however is largely derived from better access to food and products and the mass production of this commodity.  Yet the bigger costs of living in housing, cars, rent, and going to college are all much more expensive today.  It may feel cheaper to some if they only look at their monthly debt payment but the true costs have increased.

As Jim Quinn (of The Burning Platform blog) so eloquently sums up,

Debt peddlers win when income doesn’t keep up with costs and media propagandists convince the masses they must have what they can’t afford.

Has the Federal Reserve created inflation benefited you in any way whatsoever? Lucky for Ben, Janet and the rest of the Wall Street cabal the average American can’t make change from a one dollar bill, let alone grasp the concept of inflation. The government education system has done its job, just as our owners desired.

Remember – inflation is well contained. Ben is still worried that it is too low.