Ukrainian protesters erected more street barricades and occupied another government ministry building on Friday after the failure of crisis talks with President Yanukovich, as opposition leader Klitschko feared "more deaths" pointing to a weekend of increasingly violent protests. Reuters reports that Yanukovich's party stated "the situation has grown sharper throughout the country," and called on people to disregard the calls of "radical troublemakers" to turn out for protest rallies. Klitschko punched back, "Yanukovich has declared war on his own people. He is trying to hold on to power at the price of blood and de-stabilization of the situation in the country. He has to be stopped." The international community is getting involved with Hollande calling for "dialogue" but it is Biden's threat of "consequences" that spurred a different protest at the US embassy - "The US is behind everything that is happening in Kiev’s downtown right now."

"Not A Step Back" - warns opposition:

Hundreds of thousands took to the streets in the capital after Yanukovich backed away from signing a free trade deal with the European Union, which many people saw as the key to a European future, in favor of financial aid from Ukraine's old Soviet master Russia.

But the movement has since widened into broader protests against perceived misrule and corruption in the Yanukovich leadership.

Protesters have been enraged too by sweeping anti-protest legislation that was rammed through parliament last week by Yanukovich loyalists in the assembly.

Yanukovich's Party of the Regions confirmed reports that two months of anti-government protests were spreading to other parts of the country, particularly the west, where "extremists" had seized regional administration buildings.

And will get worse...

Opposition leader Vitaly Klitschko, who with two other opposition leaders failed to wring any concessions from Yanukovich late last night, said the only way out of the impasse lay with international mediation.

"Any discussion of how to settle the crisis in Ukraine must take place with the involvement of the international mediators of the highest level," a statement from his Udar party quoted him as saying.

"Instead of shifting to solving the situation by common sense, Yanukovich has declared war on his own people. He is trying to hold on to power at the price of blood and de-stabilization of the situation in the country. He has to be stopped," the boxer-turned-politician said.

Masked protesters, some carrying riot police shields seized as trophies, stood guard as others piled up sandbags packed with frozen snow to form new ramparts across the road leading down into the square.

Opposition leader Vitaly Klitschko, after leaving a second round of talks with Yanukovich empty handed, late on Thursday voiced fears the impasse could now lead to further bloodshed.

But at the US embassy, a different crowd is revolting...

...a new faction of intelligent Ukrainian protesters has sprung up this week.

They see right through the covert western operation:

“The US is behind everything that is happening in Kiev’s downtown right now.”

From yesterday afternoon, this new group have begun to encircle the US Embassy in Kiev. Their demand to the US:

‘Stop meddling in our affairs, and stop sponsoring unrest mobs in our country’. Following John McCain’s recent trip to Kiev practicing his new brand of international racketeering by threatening the Ukraine if they did not join the EU, it seems that the real Ukrainians have finally figured out that the pro-EU mobs have been staged by a conclave of western NGO’s and ‘democracy foundations’ – the very same nest of hornets who brought on the fabled ‘Arab Spring’ to the Middle East three years ago.

The main goal for Washington and the City of London is to separate Kiev from Moscow, and thus weaken Russia’s hand in Eurasia.

For EU central bankers, the prospect of raping and privatising the Urkraine economy-  is also a big incentive.

It looks like the old tricks are no longer working. At last, the ‘colour revolution’ jig may finally be up… 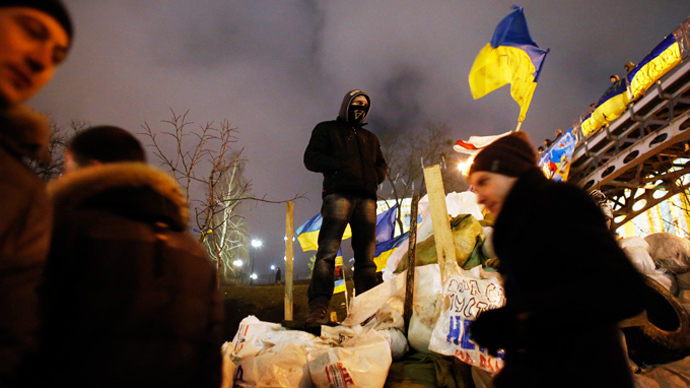 A huge crowd of demonstrators has surrounded the US embassy in the Ukrainian capital of Kiev, protesting against Washington’s meddling in the country’s internal affairs.

The event was organized by Kievans for Clean City, a new pro-government activist group which has spoken out against the rioters and violence in downtown Kiev.

“The US is behind everything that is happening in Kiev’s downtown right now. The financing is coming from over there. This has to be stopped. That is what we came out here to say to the whole world: ‘US – stop! US – there needs to be peace in Ukraine,’” said Ivan Protsenko, one of the movement’s leaders.