Gold is up 3.3% this week and headed for the biggest weekly advance since October as U.S. economic data was again worse than expected. This increased safe haven demand and the biggest exchange-traded product saw holdings rise to a two-month high.

Call options on gold, giving the buyer the right to buy June 2015 futures at $2,200 an ounce, surged 24% to a five-week high as prices climbed to a three-month high.

A weekly close above the 200 day moving average and the psychological level of $1,300/oz will be very positive for gold and could lead to gold challenging the next level of resistance at $1,357/oz and $1,434/oz.

Gold is up 5.3% so far in February and 9.3% so far this year as concerns about emerging market markets, currencies, and the U.S. economy boosted safe haven demand.  Recent employment and sales data was poor. U.S. jobless claims reached 339,000 in the week ended February 8 and retail sales in the U.S. declined in January by the most in 10 months.

The fundamental outlook for gold remains encouraging as there continues to be robust physical demand for gold despite frequent sharp and sudden sell-offs in the paper futures market. Indeed, there are continuing stresses in the physical bullion market as seen in the Gold Forward Offered Rate (GOFO) rates. These are rates at which contributors, LBMA banks primarily, are prepared to lend gold on a swap against U.S. dollars. 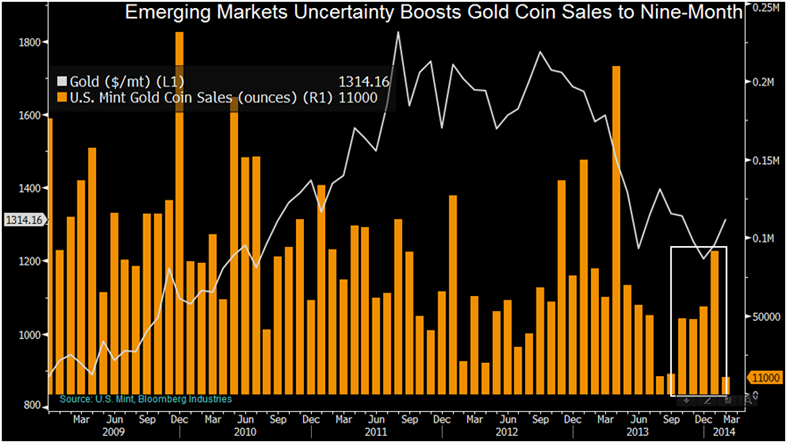 Robust physical demand is also confirmed by the government mints and their coin and bar sales - many of whom had record sales in 2013. The U.S. Mint saw gold coin sales surge 63% to 91,500 ounces in January from 56,000 ounces in December. This was the highest monthly total since April, as sales continued to rebound from their August and September lows.

Chinese demand was quite weak in the last day or two but as ever with Chinese demand it is important to focus on the long term- the monthly and annual data, and fade out the daily noise.

After a massive, record year for Chinese gold demand in 2013, Chinese demand for gold in January was again staggering. SGE data shows that withdrawals from the Shanghai Gold Exchange vaults in January 2014 accounted for 247 tons. This is an increase of 43% compared to January 2013. It’s also more than monthly global mining production and an all-time record. 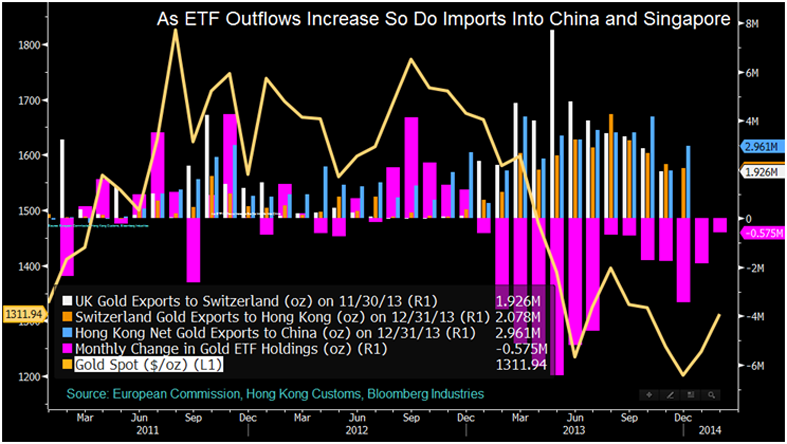 Gold is hemorrhaging out of the western banking system and flowing east to China and also to the increasingly important Asian precious metals hub in Singapore. Storage in Singapore is extremely attractive to the very risk averse, gold owning public. In just three weeks, we already have more bullion stored in Singapore than in Zurich and Hong Kong combined. Our research regarding storing gold in Singapore is the most widely downloaded and read research we have ever produced. 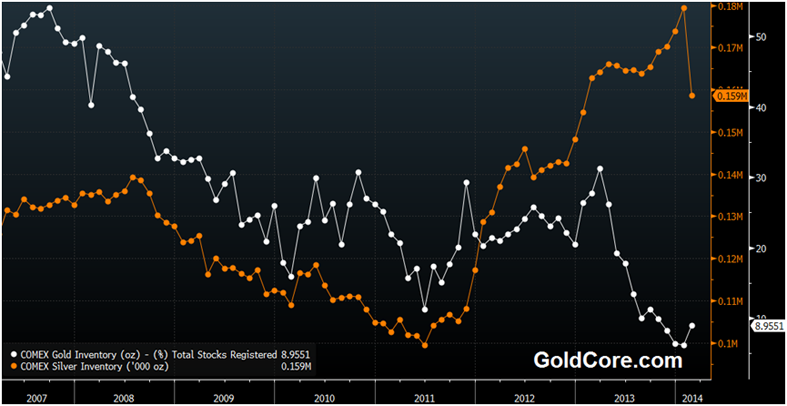 The flow of gold from west to east can also be seen in the COMEX gold inventory data which remains near multi year lows.

We are confident this trend will continue in the coming weeks, given the fragility of the western economies and banking systems. Indeed, it may lead to a COMEX default and a scramble to acquire physical gold amid surging prices.

Increasingly, gold investors are seeking the safest way to own gold and are avoiding paper gold and gold stored with banks in favour of fully segregated and fully allocated physical coins and bars, in their name, in safer jurisdictions. 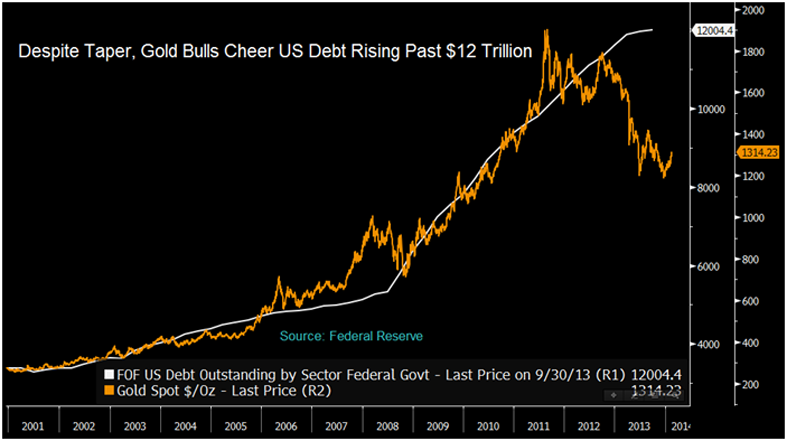 Continuing rumblings of bail-ins and the risk of punitive taxes, levies and even confiscation of assets is contributing to the flow of gold from west to east. As is the ultra loose monetary policies of western central banks who continue to punish savers.

This week brought confirmation, if it were needed that loose monetary policies are set to continue. Doves Carney at the Bank of England and Draghi at the ECB have been joined by Yellen taking over at the Fed.

In her testimony to Congress, Yellen confirmed that she is set to be remain dovish and will continue with QE in the billions per month and maintain interest rates near zero. Yellen said the markets should expect the central bank to continue to follow the ultra low-interest-rate path laid out by her predecessor. She failed to outline the exit strategy of how and when the U.S. might be able to wean itself off the drug that is cheap money and debt monetisation.

It is important to note that while the U.S. money supply did not increase much in the final year of Bernanke’s stewardship of the Fed, it has accelerated as he leaves and Yellen takes over. Money supply in the form of M2 has surged in January and February and has doubled in pace so far this year. 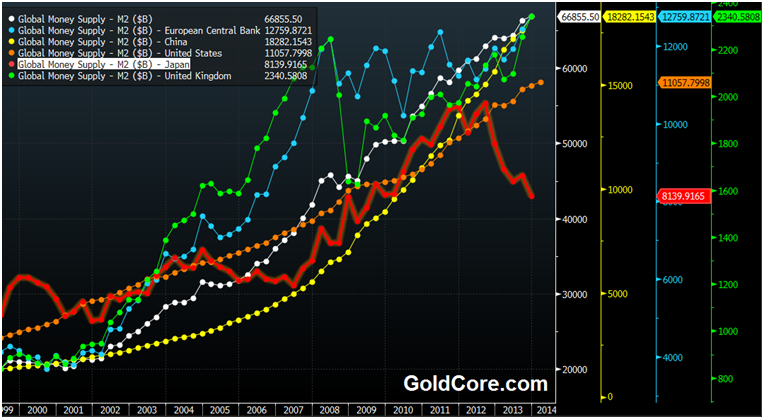 Despite the recent taper and a recent slight improvement in the U.S. annual trade and budget deficits, the U.S. financial position remains appalling as seen in the national debt. Then, there is also the small matter of the unfunded liabilities in the U.S. of between $100 trillion and $200 trillion.

This is aligned with the still positive fundamental backdrop of significant macroeconomic, systemic, geo-political and monetary risk which is leading to significant demand for physical bullion globally.

Gold is good value at these levels. However, those considering accumulating gold should not assume that the correction is over as it may not be. There is still the potential of falls to test support at $1,180/oz and more range bound trading.

However, if the very positive demand and supply fundamentals are allowed to assert themselves then we should see gold enter a new bull market. Buyers are advised to dollar cost average into position to protect from further corrections and pullbacks and to always own physical bullion and have full title to it.