Long-time readers may recall that in the early days of this website, in addition to HFT, one of our market structure pet peeves was the fact that Goldman Sachs was a Designated Market Maker on the NYSE, reaping various benefits primarily as a result of the firm's role as of one of the only Supplementary Liquidity Providers at the stock exchange - a form of slower HFT "liquidity provider" if you will. Over time, as HFT became all encompassing and as increasingly more trade took place in the HFT domain, Goldman's DMM role became less prominent especially with the arrival of such program traders as Latour Trading.

Why do we bring this up?

Because in what is a true double whammy of market structure stunners from Goldman over the past week, not only has the firm done an about face on HFT (we eagerly await Goldman's pardon of "HFT market manipulator" and former Goldman employee Sergey Aleynikov) and is now actively bashing the high freaks (much to the chagrin of Virtu and its pulled IPO, whose lead underwriter Goldman just happened to be), overnight it was reported that Goldman is also in the process of selling its "designated market-maker" unit to Dutch firm IMC Financial Markets to sell the trading business.

Keep in mind that Goldman bought its presence on the NYSE as part of its 2000 acquisition of Spear Leeds & Kellogg, which it bought for $6.5 billion at the time. Incidentally, we had a few things to say about Goldman's improprieties in this regard too. Recall from our July 2009 article, "Is Goldman Legally Frontrunning Its Clients?":

Everyone who is anyone on Wall Street has at some point used the Goldman 360 portal whether for research, news, keeping a track of prime brokerage portfolio or, disturbingly, for trading, via the REDI Plus 9.0 platform (now loaded with enhanced algo trading features to make life for you, dear soon to be frontran Goldman client, so much easier). A second widely accepted Wall Street concept is that a disclaimer is the last thing that anyone reads, if ever. Yet after taking a close look at the Goldman disclaimer for the 360 portal, which is an umbrella waiver or all downstream websites, including REDI, one discovers the following gem:

Monitoring by GS: Your use of the products and services on this Web site may be monitored by GS, and that the resultant information may be used by GS for its internal business purposes or in accordance with the rules of any applicable
regulatory or self-regulatory organization. 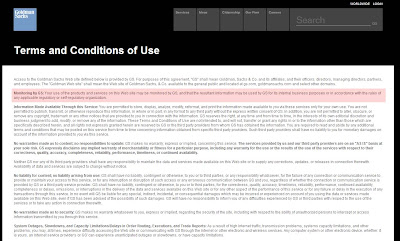 One second: by using Goldman 360 a client voluntarily allows Goldman to provide keystroke by keystroke data of everything the client does, even if that includes launching trades via REDI, to Goldman for the internal business purposes. The third thing everyone on Wall Street agrees on is that "internal business purposes" usually (and in Goldman's case, almost exclusively) means proprietary trading.

Are Goldman 360 clients (in)voluntarily signing off a release to be front ran by Goldman on any portal-based trade? Could Goldman please clarify just what "internal business purposes" means in the context of this overarching disclaimer, and also whether Goldman has ever actually used 360 submitted information in the decision making process of its prop trading desk? Lucas Van Pragg: the floor is yours.

And here are some additional Goldman Sachs and Spear, Leeds and Kellogg form documents that contain an even more crypitc warning in section 4(f) in Use Of Services:

You acknowledge that we may monitor your use of the Services for our own purposes (and not for your benefit). We may use the resulting information for internal business purposes or in accordance with the rules of any applicable regulatory or self-regulatory body and in compliance with applicable law and regulation.

NOT FOR YOUR BENEFIT? I mean, come on, how more clearer does it need to get. 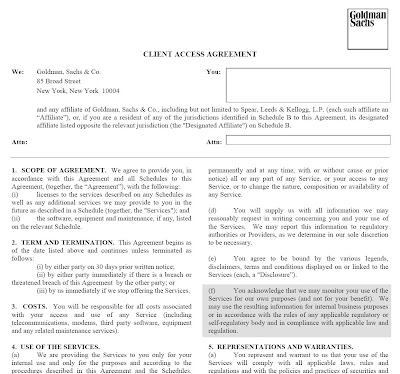 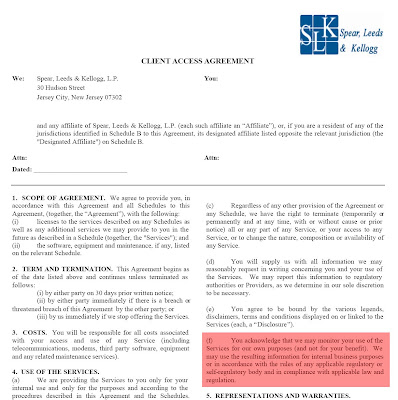 Anyway, back to the topic at hand and Goldman's disposition of NYSE assets: according to the NYT, Goldman is seeking a paltry $30 million for the DMM post. In other words, a total loss on $6.5 billion in old school assets courtesy of HFT.

However, what is unexpected, is the complete transformation Goldman has undergone in in the past several weeks: first Goldman, the bank that everyone else on Wall Street always imitates, waving goodbye to HFT, and now departing the NYSE?

When the world's most intelligent FDIC-backed hedge fund, pardon, bank says the current market structure is no longer necessary to Goldman, people notice, and promptly imitate.

To be sure - if this is not indicative of a major storm coming for traditional "lit" market structure (as opposed to dark pools of which IEX, until recently, was one and where Goldman has nearly complete dominance with Sigma X), we don't know what is.

Once again: if we were HFT vacuum tubes, we would be sweating nanobullets right about now.