It is now quite clear why BATS CEO Bill O'Brien was so agitated during the Tuesday's screamfest on CNBC. As The Wall Street Journal's Scott Patterson reports, under pressure from the NYAG, BATS has hurriedly issued a statement correcting the CEO's false comments during the exchange with IEX's Brad Katsuyama. After Katsuyama said "you wanna do this, let's do this" clearly giving him an out, O'Brien stated that BATS priced its trades off 'high-speed' data feeds when in fact they price their trades off a much slower feed (and therefore 'enable' the exact HFT-front-running that is in question).

Here is the clip in particular where O'Brien lies following Katsuyama's question... that BATS uses the high-speed feed to price its trades...

The exchange in question...

“What do you use to price trades in your matching engine on Direct Edge?” Mr. Katsuyama asked Mr. O’Brien.

“We use the direct feeds,” Mr. O’Brien said.

Mr. Katsuyama, whose IEX dark pool markets itself as a haven for investors against high-speed traders, later brought up the issue again. “You use the SIP to price trades on Direct Edge,” he said.

But as The Wall Street Journal reports, it was true

BATS Global Markets Inc., under pressure from the New York Attorney General’s office, corrected statements made by a senior executive during a televised interview this week about how its exchanges work.

The distinction matters because high-speed traders can use powerful computers and superfast links between markets to outpace traders and trading venues that rely on slower market data, such as the SIP.

Apparently the NYAG decided to make a public spectacle and to force O'Brien to shame himself (in a very low frequency fashion) publicly on Twitter:

For the matching engine, EDGA & EDGX currently use the SIP, and will transition to direct feeds for all major exchanges in January 2015.

And here is Nanex with the clearest example of just what the difference between the 'slow' consolidated SIP feed (that BATS CEO lied about using) and fast 'Direct' feed (that BATS actually uses enabling HFT to skim as seen below) means... 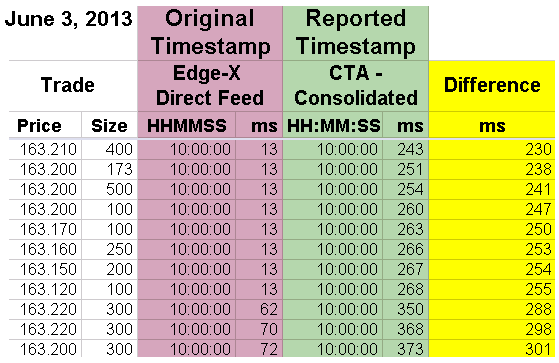 The loss of original time-stamps makes it difficult to reconstruct accurate audit trails or make comparisons to quote data. It also renders any computations based on trade data (e.g. charts, technical analysis) inaccurate.

See this paper for more charts and data on this event.

Ironic that the two versions of the same reality are "blue" and "red" in this chart... which pill will you swallow?

This leaves us with two possibilities, either:

1) The CEO of BATS has no idea what his firm actually does and is merely happy to earn an impressive amount of money skimming off the rest of the population of market traders no questions asked, or

2) The CEO of BATS is a liar and is merely happy to earn an impressive amount of money skimming off the rest of the population of market traders no questions asked.