“Fundamental to modern thinking on central banking is the idea that monetary policy is more effective when the public better understands and anticipates how the central bank will respond to evolving economic conditions… Recall how this worked during the couple of decades before the crisis. The FOMC's main policy tool, the federal funds rate, was well above zero, leaving ample scope to respond to the modest shocks that buffeted the economy during that period. Many studies confirmed that the appropriate response of policy to those shocks could be described with a fair degree of accuracy by a simple rule linking the federal funds rate to the shortfall or excess of employment and inflation relative to their desired values. The famous Taylor rule provides one such formula.”

In her first public speech on monetary policy, Janet Yellen made it clear that the Fed intends to pursue a more rules-based, less discretionary policy. This is good news. The bad news, however, is that Yellen focused only on employment and inflation. In that same speech, not a single word was said about attending to speculative risks or financial instability (which are inherent in Fed-induced, yield-seeking speculation). Without attending to that third leg, the Fed is resting the fate of the U.S. economy on a two-legged stool.

The problem is this. In viewing the Fed’s mandate as a tradeoff only between inflation and unemployment, Chair Yellen seems to overlook the feature of economic dynamics that has been most punishing for the U.S. economy over the past decade. That feature is repeated malinvestment, yield-seeking speculation, and ultimately financial instability, largely enabled by the Federal Reserve’s own actions.

To overlook yield-seeking speculation as a central element connected to the Federal Reserve’s mandate is to invite a repeat of dismal economic consequences over and over again. The Fed’s mandate need not explicitly refer to financial stability – it is enough to recognize that the failure to take speculation, malinvestment, and financial stability seriously has been one of the primary causes of economic and financial crises that prevent the Fed from achieving that mandate. Indeed, the Fed has again baked such consequences into the cake as a result of its policy of quantitative easing, and an associated lack of appreciation for how equity valuations work (particularly the need to consider valuation multiples and profit margins jointly, whenever one uses earnings-based measures).

Nearly every argument that stocks are not in a “bubble” begin with an appeal to 2000, as if the most extreme valuations in history should be a upside objective, below which anything else is acceptable. As long as conditions are not as extreme as 2000, the word “bubble” presumably cannot be applied. Others might argue that the word “bubble” implies certain mathematical features, such as violations of “transversality” that are difficult to test in real-time. We clearly observed a Sornette-type bubble in the advance to what we still view as a January singularity, with slight marginal new highs since then being part of a broad topping process - as we also observed in 2000 and 2007. Still, to avoid these semantics, maybe it’s best to use the phrase “speculative extreme.”

The chart below shows the position of valuations on the basis of Robert Shiller’s cyclically-adjusted P/E. As I’ve noted elsewhere, the reliability of the Shiller metric is greatly improved by adjusting for the implied level of profit margins (Shilller “earnings” divided by S&P 500 revenues) embedded into that P/E. At normal profit margins, the Shiller P/E would presently be above 30. 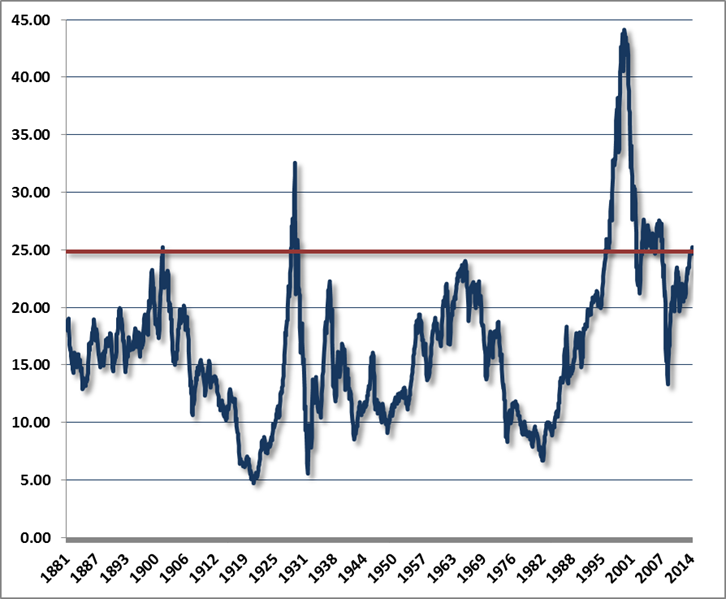 On the basis of other measures that are even better correlated with actual subsequent market returns, valuations now meet or exceed the levels observed at prior market extremes in history that were followed by 18-20 year periods of negative real returns. We call these extremes not just “cyclical” but “secular” market peaks. Present market extremes can only be excluded from this class of speculative instances if we restrict the definition of "extreme" to the 2000 peak alone. Even then, the price/revenue ratio of the median stock is now higher than in 2000 (as smaller capitalization stocks were much more reasonably priced at the 2000 peak than today).

Make no mistake. The Federal Reserve’s policy of quantitative easing has starved investors of all sources of safe return, provoking them to reach for yield in more speculative assets, including equities, leveraged loans, covenant-lite debt, and other securities. Having stomped on the pedal for years, all of these asset classes are valued at levels that are strenuously elevated from a historical perspective, and as a result, offer strikingly poor prospective returns for long-term investors.

To quote a decades-old passage by economist Ludwig von Mises, and as a reminder of what we should have learned after Fed-induced yield-seeking led to a reckless expansion of mortgage debt, a bubble in housing, and the worst economic collapse in modern times:

“The recurrence of periods of boom which are followed by periods of depression is the unavoidable outcome of the attempts, repeated again and again, to lower the gross market rate of interest by means of credit expansion. True, governments can reduce the rate of interest in the short run. They can issue additional paper money. They can thus create an artificial boom and the appearance of prosperity. But such a boom is bound to collapse soon or late and to bring about a depression.”

“To combat depression by a forced credit expansion is to attempt to cure the evil by the very means which brought it about; because we are suffering from a misdirection or production, we want to create further misdirection - a procedure which can only lead to a much more severe crisis as soon as the credit expansion comes to an end.”

Frankly, I don’t have any strong impression that economic outcomes in the completion of the present cycle must be severe. Further policy mistakes would be required beyond a QE-induced speculative run. On the other hand, I have no doubt at all that having driven equity valuations to present levels, investors will be starved of total return – from current prices – for at least a decade (assuming valuations never move below historical norms), and possibly much longer (in the event that valuations do indeed move below historical norms 15 or 20 years from today).

Keep in mind, however, that a significant retreat in valuations even over the next couple of years could dramatically reverse this situation, creating the prospect for very good long-term investment returns from those lower price levels. I remain very optimistic that strong opportunities will emerge even over the completion of the present cycle. Given supportive conditions and the absence of extremely overvalued, overbought, overbullish syndromes, reasonable opportunities would not even require a retreat to historically “normal” valuations. It’s just that from current price levels, the prospect of adequate long-term returns is thin. In short, the same amount that investors are likely to obtain by selling equities years from now is already sitting on the table for the taking today. For investors without multi-decade horizons, it may be wise to use that opportunity.