Are Markets "Punishing" Russia? ... Or All Emerging Markets?

Much has been made of the "costs" imposed on Russia - by the West - thanks to the sanctions... and how this has crushed the economy, tumbled the Ruble, and created huge outflows (even as the Russian stock market outperforms the US since sanctions began). However, this 'party line' propaganda that Obama and his followers would like the world to believe about the efficacy of sanctions is simply false. As the following charts show, outflows started considerably earlier and are much more serious for the rest of the Emerging Markets... and as Constantin Gurdgiev notes, Russia has actually seen inflows recently...

The "Market" does not seem to be punishing Russia...

But it's really all about the outflows...

An interesting analysis from the BBVA Research on capital flows to EMs… while much can be discussed, one thing is of interest from my point of view (not covered by the BBVA): Russian inflows.
We've heard about alleged markets punishment and investors flight from Russia. And there has been some for sure. Except, the theory that this flight is tied to naughty kremlin behaviour in Ukraine is a little… how shall we put it… a stretch may be?
Ok, let's look at how net capital flows look in the EMs:
Emerging markets are some 14% below trend - big outflows starting with non-Ukraine Fed tapering: 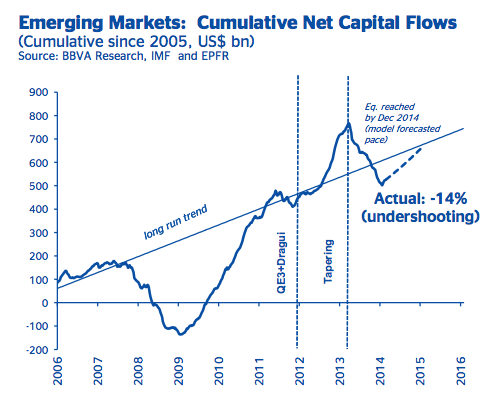 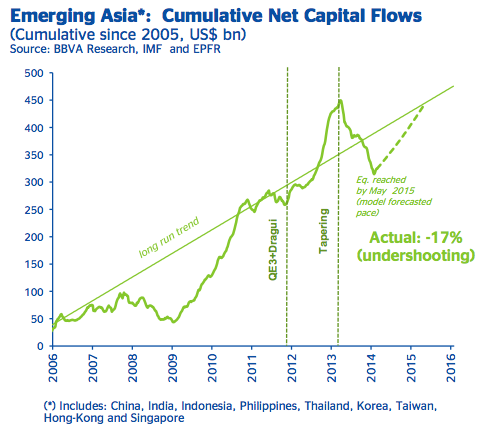 So Asia is even worse off than the general EMs... And Asia is Ukraine-free and Fed-tied.
Yes, Russia is down… 24% below trend by estimates of the BBVA 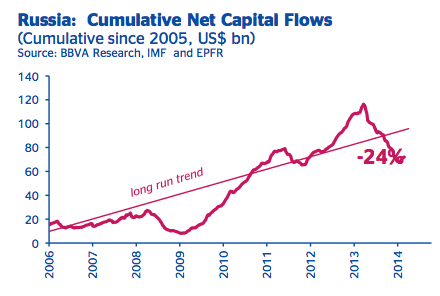 And guess what: decline started in the same 'tapering-on' period and well before Ukraine and accelerated similarly to the rest of EMs.
And worse… look at what happened in Brazil: 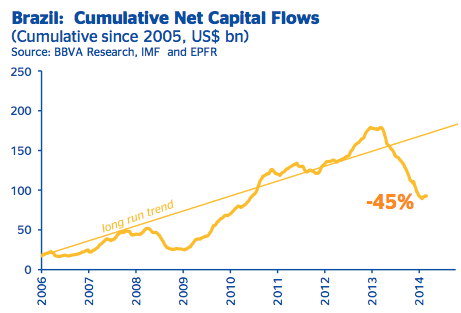 Brazil's 'troubles with Ukraine' started earlier on than rest of EMs, but accelerate with Fed tapering.
Heard of Indonesia? It seems also to be in a conflict with Ukraine: 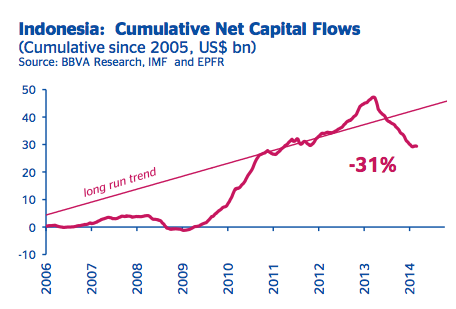 So how about that thesis alleging that Russia is being punished for Ukraine crisis by those investors?
And here is BBVA's guide to controlling thos outflows...