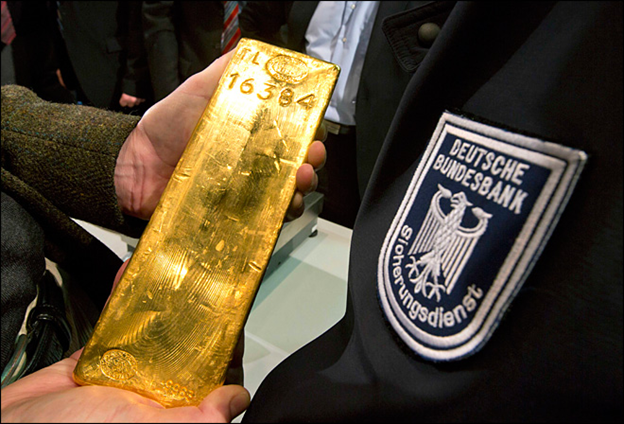 A journalist holds a gold ingot next to a security officer of the German Central Bank, right, in Frankfurt, Germany, Wednesday January 16, 2013

Gold climbed to a two-month high over $1,324/oz in London this morning as tension in Iraq led to a safe haven bid and consolidation over the $1,300/oz level. European stocks dropped to a one-week low as German business confidence fell to the lowest level this year and on concerns about geopolitical risk.

Gold futures trading volume was 11% below the average for the past 100 days for this time of day, according to data compiled by Bloomberg.

Sunni militants, with powerful backing, have consolidated their hold over swathes of Iraq, OPEC’s second-biggest oil producer, after two weeks of fighting. The U.S. said Iraq faces an existential threat and sent Secretary of State John Kerry to the north of Iraq. He is said to be trying to persuade Iraqi leaders to form a more inclusive government.

In Ukraine, militants were shooting overnight in Starobilsk which did not result in casualties. Pro-Russian rebels in the east of the country had earlier called a cease-fire in fighting against government forces, matching a truce announcement made three days earlier by President Petro Poroshenko.

Gold bullion climbed 3% last week as the Federal Reserve said it will keep interest rates at almost zero for a considerable time and geopolitical risk intensified.

Gold is 6% higher so far in June and is set for the first back-to-back quarterly gain since 2011, partly as violence in Iraq and tension in Ukraine spurred demand for a haven.

Technically, gold looks positive and is trading above key moving averages again and appears to have broken out. A close above $1,400/oz will be very bullish and embolden the bulls to re-enter the market. 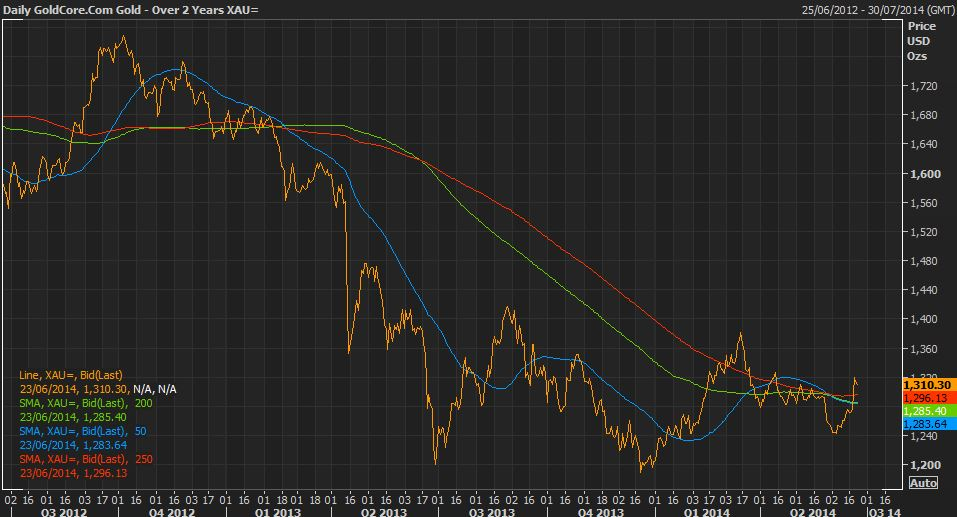 Platinum and palladium rose again as producers moved closer to signing a deal to end a mine strike in South Africa. The three largest platinum companies and the main union at their South African mines will today sign a deal to end a crippling five-month strike after the labour group’s members accepted pay proposals from producers. The stoppage by at least 70,000 miners cost the companies 23.9 billion rand billion in revenue and reduced supplies. South Africa is the biggest supplier of platinum and the second-largest for palladium.

Both the physical platinum and palladium markets facing sizable deficits this year after the lengthy production stoppage in South Africa. This will support prices and should economic war with Russia deepen then we should see some real fireworks in the PGM markets that propel prices back to record highs.

Germany Still Wants Gold Back – Repatriation Campaign Continues
More than 18 months ago, on January 16, 2013 Germany’s central bank, the Bundesbank, announced that it will repatriate to Germany all 374 tonnes it had stored with the Banque de France in Paris, as well as 300 tonnes held in Manhattan by the New York Federal Reserve, by 2020.

Despite a lag of 18 months, the Bundesbank, as the Federal Bank of Germany is often called, has only managed to bring home a tiny 37 tonnes of gold.

A paltry 5 tonnes of that came from the U.S., the rest from Paris. The US Fed holds 45% or roughly $635 billion of the total 3,396 tonnes of gold Germany have in reserve, the world’s second largest gold reserves.

This has prompted, not surprisingly, renewed questions whether Germany’s gold still exists in those Manhattan vaults or if it has been melted down, leased or even sold.

With doubts about the whereabouts of Germany’s gold still prevalent, it appears that either Chancellor Angela Merkel’s ruling coalition or the ECB, has decided to attempt to put the matter to rest.

Bloomberg reported yesterday that the German campaign to repatriate German gold from the U.S. has ended. The Bloomberg story was headlined ‘German Gold Stays in New York in Rebuff to Euro Doubters’ and the first sentence was ‘Germany has decided its gold is safe in American hands’.

Just to set the record straight re this article in which my name is mentioned and in which I am quoted out of context:
a) Bloomberg uncritically cites statements of politicians and BuBa-bankers who have or give no proof whatsoever re the untouched whereabouts of the german Gold.

b) Re our campaign “Repatriate our Gold” “On hold” does of course NOT mean that we are in any way satisfied with the current status of BuBa´s ongoing repatriation (far too slow and too little – only 5 tons came from NY in 2013! Not exactly a proof for the untouched existence of 1500 tons in a NY vault unaudited since 1950…). Our public campaign will therefore have to continue.

c) Almost no info in the article can be considered in any way “news”. Simply because there has not been any material news in this context since early 2013.

d) Especially the headline is plainly false, because there has not been any change in BuBa´s (too slow) repatriation plans: at least 300+ tonnes will come from NY by end 2020. It is not much – but contrary to the headline, BuBa has NOT stopped the ongoing partial repatriation – enforced solely by public pressure!

e) The political party “Alternative for Germany” has never been part of our campaign – they can therefore not have been “rebuffed” as the article suggests.

f) The political party “FDP” has (with the exception of one (1) MP ) never demanded a repatriation – yet another false info in the article.

g) Some politicians cited in the article cannot in any way claim to be “in charge” of the german gold hoard (abroad or not). This holds true for both Mr Barthle and for Mr Hardt: BuBa alone is in charge – and officially, BuBa is independent from political influence…

Summary: a “non-news” article with a wrong headline, strange interviewees, old news, and with a clearly apologetic ideological approach: the main purpose seems to be NOT to give space to the myriad of unanswered and extremely relevant questions BuBa and the Fed have been refusing to answer for decades. Please read more at “Repatriate our Gold.”

The Bundesbank’s move to repatriate 674 tonnes of the German gold reserves from Paris and New York to Frankfurt in January 2013 was a victory for openness, transparency and for those who have campaigned for transparency in the gold market for years.

The move by the Bundesbank to be more transparent about the location of gold reserves was welcomed by many market participants as most believe that central banks should have to disclose simple facts about their gold reserves – such as their quantity, where they are held, whether they have been lent or swapped, and so forth.

The fact that the Bundesbank had been nudged into new-found transparency was a victory for the groups of investors – most prominent among them, the Gold Anti-Trust Action Committee or GATA – that have for years been asking central banks to reveal their holdings and activities in the gold market.

Those who have dismissed the Gold Anti-Trust Action Committee or GATA as “conspiracy theorists” have yet to acknowledge or refute the voluminous documentation and evidence that GATA have amassed over the years.

GATA have long made a strong case that certain banks may have been manipulating gold and silver prices lower. In the same way that banks have been proven to conspire in rigging LIBOR, interest rates and foreign exchange markets.

The campaign to achieve a free market in gold and silver prices will continue.