Bubble Finance At Work: How Buyback-Mania Is Gutting Growth & Leaving Financial Wrecks In Its Wake

Janet Yellen is a chatterbox of numbers, but most of them are “noise”.  And that’s her term.

Yet here is a profoundly important set of numbers that you haven’t heard boo about from Yellen and her mad money printers. To wit, during the “difficult” economic times since the financial crisis began gathering force in Q1 2008, the S&P 500 companies have distributed $3.8 trillion in stock buybacks and dividends out of just $4 trillion in cumulative net income. That’s right, 95 cents of every dollar they earned—including the huge gains from restructurings, downsizings and job terminations—was flushed right back into the Wall Street casino. Self-evidently, the corporate form of business organization is designed such that some considerable portion of net earnings should be returned to their owners each year. But a 95% rate of distribution is a giant aberration. Were this outcome to occur on the undisturbed free market, for example, it would signal an economy that is dead in the water and that participating companies face a dearth of opportunities to reinvest profits in future growth.

Needless to say, that is the opposite of the “growth” and “escape velocity” story that currently excites stock market punters, and is wildly inconsistent with present capitalization rates in the stock market. That is, in a world of permanent zero growth and nearly 100% earnings distribution, the S&P 500′s current 19X PE on reported earnings would be wildly too high. The more appropriate PE would be in high single digits.

So the $3.8 trillion of dividends and buybacks since Q1 2008 reflects not the natural economics of the market at work, but the artificial regime of monetary central planning and the tax-advantaged treatment of corporate debt. Corporations are eating their seed corn because boards and CEO’s function in a Fed-created financial casino where they are massively incentivized to feed the fast money beast with ever larger share buyback programs in order to shrink the float and goose per share earnings. Doing so generates plump stock option gains, and failure to do so will bring on the black plague of shareholder “activists” agitating for big stock buybacks with borrowed money, and a new CEO and board, too.

Moreover, this pattern is owing to the fact that the Greenspan/Bernanke/Yellen “put” under the stock indices has destroyed two-way markets and the natural short interest that arises in any honest securities market. Accordingly, “downside insurance” against a decline in the broad market has become dirt cheap—as currently reflected in rock bottom VIX levels—-and has therefore enabled Wall Street gamblers to chase momentum plays at will. Stated differently, the momentum chasing hedge funds which drive the corporate buyback mania would not be nearly as profitable—-or massively sized—- if the Fed were not effectively subsidizing their downside hedges.

By now this syndrome has become so completely entrenched that the big cap corporate universe functions as an integral component of the Fed’s serial bubble finance cycle. As shown below, the pattern is wildly pro-cyclical, meaning that corporate cash increasingly fuels the bubble as stock prices reach their peak. Just prior to the financial crisis in Q1 2008, for example, share buybacks and dividends among the S&P 500 companies amounted to 130% of net income—-a distribution rate which plunged to just 65% during the dark days of Q1 2009.

But now we are off the races once again. The distribution rate reached 88% in CY 2013 and came in at nearly 110% in Q1 2014. In short, as financial markets reach their Fed induced bubble peaks, companies spend all they earn and all they can borrow chasing their stock prices ever higher. Indeed, during the most recent quarters, share repurchase programs have been the marginal bid which has propelled the stock indices to their current nosebleed heights.

Corporate stock buybacks thus function as a bubble cycle accelerator, meaning that they are making each new Fed reflation cycle more extreme and unstable. Prior to Greenspan’s irrational exuberance moment in December 1996 share buybacks amounted to about 1% of the S&P 500′s aggregate market cap. By the 2007 peak, they exceeded 5% and are heading in that direction once again—this time accompanied by a rising rate of regular dividend payouts, as well (not shown). 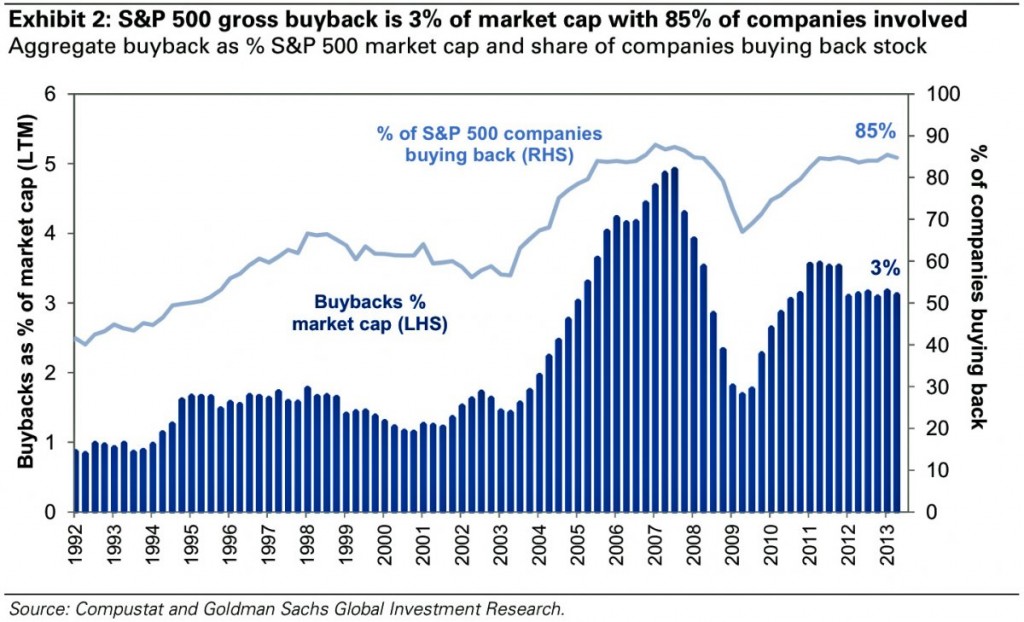 It does not take much analysis to see that this kind of financial engineering results in the inflation of existing financial assets, not the creation of new productive capacity. The graph below on net investment in fixed business assets is the smoking gun. The annual nominal level of net investment has not increased since 1997, meaning that after about 2% average annual inflation—real investment in new capacity in the US economy has shrunk by nearly 30% in the 16 years since the first Greenspan bubble began its final ascent. Stated differently, as the Fed’s money printing has ballooned and amplified the financial bubble cycles, the trend in real capacity growth has steadily worsened.

Needless to say, no Fed minutes ever even hint at the corporate seed corn that is being consumed or the perverse behavior in the C suites that has been induced by monetary central planning. Instead, its all about the “noise” emanating from the high frequency in-coming data.

Also unremarked is the fact that the share buyback mania leaves competitively challenged businesses in a precarious position and unable to weather downturns in the general business cycle or in their own sector.

Radio Shack is a prime example. It is now tottering on the edge of bankruptcy, and there is no doubt whatsoever that this is owing to a giant strategic error by its management and board. To wit, during the past 13 years it repurchased $3 billion of stock on the back of only $2.1 billion in cumulative net income. Indeed, in seven of those years it flushed back into the market more than 100% of its earnings—including $400 million of buybacks in 2010 on only $200 million of net income.

Today it is in a liquidity crisis, with barely $60 million of available cash. The article here fills in the grisly details about how this case of corporate hara-kiri unfolded. But the essential point is that it is not a unique case—just a leading edge illustration of the manner in which the Fed’s destruction of honest financial markets is impairing and gutting the nation’s business economy.

Since stock buybacks, misguidedly, are considered investments in one’s own business, are we not witnessing a massive clustering of errors with innumerable executive management teams authorizing malinvestment on a grand scale?

Instead of businessmen misreading market signals and malinvesting in capital and producers goods, many are malinvesting in shares of their own companies via stock buybacks. Like RadioShack, over time, will other companies strip-mine equity until their balance sheets become depleted? Once the current Federal Reserve induced bubbles implode, I’m confident RadioShack will not stand alone as to having gone bonkers, and broke, with buybacks.