Feeling Poorer Through The Power Of Inflation

You have to love how the Federal Reserve downplays inflation when they are the primary source of it with other central bankers for this monetary phenomenon. They continue to play inflation down because it gives them the power to continue to use policies that seem to only aid their banking allies while making working Americans poorer by the day. Inflation has a slow eroding power that is not readily visible since it usually takes time to work through a system. Looking at a broader timeframe however it becomes readily apparent that inflation is hitting our system hard and most working families don’t need an advanced degree in economics to understand this. According to the CPI, the overall rate of inflation since January of 2000 has been 39 percent. The Fed prefers to use the PCE Deflator measure and this only has inflation running at a 31 percent rate. But when we actually look at the cost of goods and services across the spending spectrum we realize that inflation is very much alive and well with us.

Examining the cost of goods and services since 2000

Americans eat, pay mortgages/rent, and tend to drive a lot. We also have the aspiration of sending our kids to college for a better and more educated life. When sick, we want to have access to healthcare. All of these services and goods are much more expensive since 2000. Inflation is very much alive when we look at the cost of goods and services.

Take a look at some major spending categories since January of 2000: 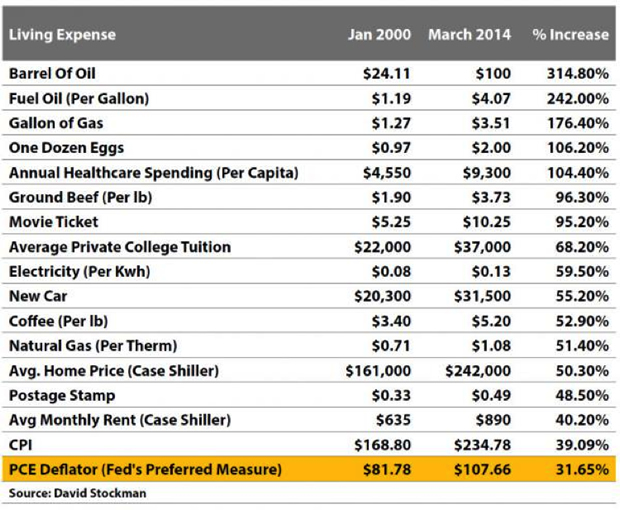 A gallon of gas is up 176 percent since 2000. Ground beef is up 96 percent. Your typical college tuition is up 68 percent. A new car will now cost you 55 percent more than it would have in 2000. Your average home is now up 50 percent even though we went through the biggest housing bubble our nation has faced (largely driven by cheap and dangerous banking policy). Yet the overall CPI is only registering a 39 percent increase. The Fed looks at the PCE Deflator and this is only up 31 percent. So it is no surprise why the Fed has aggressively ramped up monetary policy. Don’t think so? Look at the current monetary base: 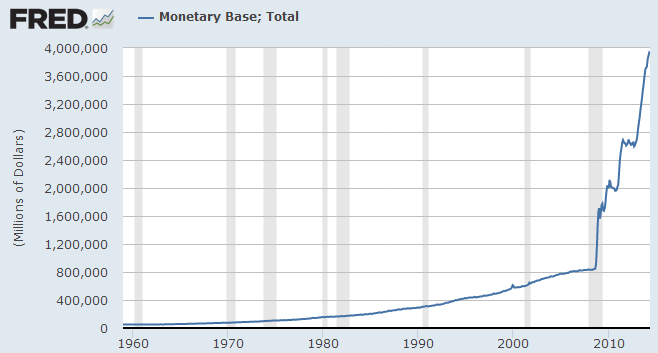 The jump from $800 billion to over $4 trillion is largely driven by large commercial banks offloading debt instruments to the Fed. This has done very little in helping the balance sheet of Americans but has essentially been a shadow bailout for the beleaguered banking sector.

The primary reason Americans feel poorer is that wages are simply not keeping up: 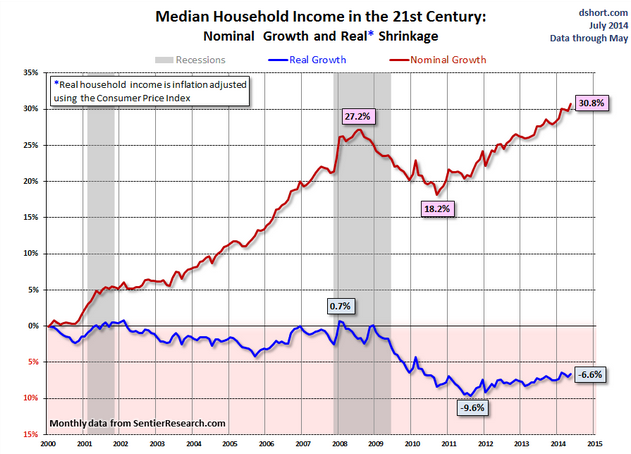 The CPI is up 39 percent while nominal wages are up 30 percent. The blue line is the most important above. That is, wages are not keeping up with the increase in the cost of goods and services and this is by the more conservative CPI measure. If you look at the Case Shiller housing measure, you will see your typical house is now 50 percent more expensive and this is the biggest expense for Americas. Your new car is up 55 percent in cost since 2000. College tuition is up 68 percent or nearly twice the rate of wage growth. Healthcare spending per capita is up 104 percent so there is no way wage growth is keeping up with this.

That is the insidious problem with inflation. Some might think that with meager wage growth that somehow they are keeping up. But the Fed has flooded the system with access to debt and this debt has largely benefitted big banks. Big investors are now using cheap debt since they are the people creating access to debt instruments (i.e., mortgages, auto loans, credit card debt) and would rather use the money on buying up real assets instead of lending these out to Americans. For example, since the housing bubble burst a large part of single family home buying has come from investors. This has driven up prices for no other reason that investors have easy access to debt created by loose monetary policy. Little benefit is derived from the public outside of more money being spent on housing with weaker wages.

Those that lived through the 1970s will tell you that inflation without real growth is problematic for an economy. Yet we have a generation that has seemed to have forgotten history. What is more problematic this time is that wage inflation is simply not to be had. So Americans again are forced to go into massive debt to purchase homes, buy cars, or simply to send their kids to college. This is why we now have $1.2 trillion in student debt while many young graduates are unable to service their debt because wages are coming from the growing low wage service sector.

When you hear that inflation does not exist, simply look at the price of goods and services over the last decade and look at your paycheck. You might care to differ.