Capitalism gets into deep trouble when the price of financial assets becomes completely disconnected from economic reality and common sense. What ensues is rampant speculation in which financial gamblers careen from one hot money play to the next, leaving the financial system distorted and unstable—a proverbial train wreck waiting to happen.

That’s where we are now. And nowhere is this more evident than in the absurd run-up in the price of European sovereign debt since the Euro-crisis peaked in mid-2012. In that regard, perhaps Portugal is the poster-boy. It’s fiscal, financial and economic indicators are still deep in the soup, yet its government bond prices have soared in a triumphal arc skyward.

Unfortunately, the recent crashing landing of its largest conglomerate and financial group (Espirito Santo Group) is a stark remainder that its cartel-ridden, import-addicted, debt-besotted economy is not even close to being fixed. Notwithstanding the false claims of Brussels and Lisbon that it has successfully “graduated” from its EC bailout, the truth is that the risk of default embedded in its sovereign debt has not been reduced by an iota.

At the time of the 2011-2012 crisis, its central government was already sliding rapidly into a debt trap with a ratio of just under 100%. Self-evidently, the nation’s so-called EC bailout has only made its public debt burden dramatically worse. Today Portugal’s debt to GDP ratio is 129% and there is no sign of a turnaround.

But that has not deterred the rambunctious speculators in peripheral sovereign debt. Since mid-2012 and Draghi’s “whatever it takes” ukase, the price of Portugal’s public debt has soared. This means that leveraged speculators—-and they are all leveraged on repo or similar forms of hypothecated borrowings—-have made a killing, harvesting triple-digit gains on the thin slice of non-borrowed capital they actually have at risk in these carry trades.

As shown below, in response to this central bank induced bond buying campaign by fast money speculators, the 10-year Portuguese government bond yield has experienced a stunning plunge from 15% to 4% during the last 24 months. Among other things, this dramatic improvement virtually overnight in its fiscal financing costs has taught Portugal’s government a dangerously false lesson. Namely, that in the face of unsustainable fiscal profligacy all its takes is a little budgetary sleight of hand and fake austerity. In fact, nearly all of its fiscal improvement is owing to the one-time sale of state assets including the airport operator and various public utilities under financial arrangement which amount to little more than off-budget borrowing.

Moreover, regardless of the quality of its fiscal recovery measures, the sharp drop in its bond yield would ordinarily at least imply that Portugal has turned its chronic fiscal deficits on a dime, but that is not remotely the case, either.  Portugal has been burying itself in red ink for decades and despite being down from their crisis peak of 10% of GDP in 2010-2011, government deficits are shown are still running at the historic rate of 5% of GDP and will be lucky to break below that level in 2014 or anytime soon thereafter.

Needless to say, when a country’s nominal GDP is stuck on the flat-line, it can’t add 5% of annual output to the public debt each and every year without quickly being doomed by sheer arithmetic. That baleful fiscal math, in fact, is exactly the reason its bonds sold off so sharply in the first place, and why in the absence of massive central bank distortion of bond prices, Portugal would still be under the thumb of crushing yields on its monumental public debt. 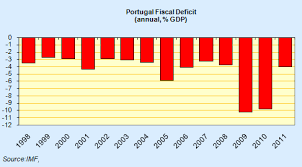 So what is at work here is the opposite of is honest price discovery of the type that occurs on a genuine free market. There is virtually no logical basis for the bond market rally in Portuguese or other European sovereign debt. As detailed below, the whole thing is a central bank driven wave of short-term speculation and inflows of hot money which can reverse as quickly as it arrived following Draghi’s ukase.

in the meanwhile, the Wall Street and London sell-side continues to promote hairline and often transient  improvements as justification for the rally, which is to say, purchase of bonds and derivatives from their trading desks. In truth, the dismal facts of Portugal’s stunted economy and profligate fiscal practices have barely improved, but that does not prevent sell side ballyhoo from breaking out all over.

During recent quarters, for instance, Portugal’s real GDP has turned slightly upward, but the magnitude of improvement is laughably marginal—-certainly not remotely consistent with the massive gain in its bond prices. Thus, after three quarters of hairline gains, its real GDP in the Q2 2014 was a barely measureable 0.8% larger than the same quarter a year ago. And these rounding error gains, of course, have not yet made up a fraction of the deep shrinkage that occurred in the prior two years.

Indeed, despite all the sell-side drum-beating, Portugal’s real GDP is still 6% smaller than it was on the eve of the financial crisis in 2007. In that context, the galloping bond market rally during the past two years is insensible: a slight uptick from the bottom of a deeply depressed trend is no evidence whatsoever that Portugal’s battered national economy is being sustainably rejuvenated national economy, or that its capacity to service its spiraling debts has been improved in the slightest.  In short, the entire bond rally has noting to do with the fundamentals of Portugal’s fiscal and economic circumstances.

The real problem, of course, is that all sectors of the Portuguese economy buried themselves in debt during the years after it joined the EC and was able to access the cheap funding available in the euro bank and bond markets. Indeed, the explosive growth of debt was so extreme that it could be fairly labeled as a sheer financial orgy.  As shown below, during the 14 years between 1996 and 2010, for example, household sector debt increased by 6X at a time when the nominal GDP grew by less than 2X. Even after some modest liquidation during the last 4 years, household debt is still 5X larger than it was in the mid-1990s, yet Portugal’s nominal GDP has actually declines since the 2010 debt peak, meaning that the household leverage ratio is now worse than ever.

The same holds for non-financial business debt, which also soared by 6X after the turn of the century. As is evident below, there has been no progress whatsoever in reducing the enormous burden on the business sector.

indeed, what all this fantastic borrowing did was to allow Portugal to finance a wholly unsupportable national life-style by importing vastly more goods and services than it exported, and financing the difference by means of the above borrowings in the euro debt markets.  During the decades leading up to it financial crisis, its current account deficit averaged between 6% and 12% of GDP—surely a dead-end trend if there ever was one. 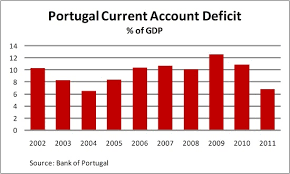 Once again, however, the sell-side propaganda about the “turn” in Portugal’s current account is just another case of grasping at straws. In order to liquidate its towering debts, Portugal actually needs to run large trade surpluses for years to come in order to generate the means of pay down. But despite a modest uptick in exports which is inherently constrained by the faltering condition of the EC economies and the general world slowdown, it has barely made a dent in its level of imports. Stated differently, the Portuguese economy continues to live high on the hog as is its debt crisis had never really happened.

The fact is, away from Wall Street’s fatuous focus on superficial, hairline signs of recovery, Portugal’s real economy is still deep in the doldrums. Its industrial production index, for example, is down 5% from 2010 levels and 18 percent from turn of the century levels.

But the most telling indicator is its plunging labor force participation rate. As shown in the graph below, the dramatic plunge since 2000 is even more severe than the ballyhooed decline in the US figure. The reason is that Portugal’s work force has been out-migrating in droves or tumbling into its over-burdened social safety net.  Like, in the US, its recent hairline gains in the unemployment rate—still above 15%—are essentially attributable to a shrinking work force.

This is the crux of the matter. With a declining level of labor input and the unavoidable need for nominal wages—which were vastly inflated during the debt boom—to shrink in absolute terms to more sustainable levels, Portugal’s national income growth rate will flat-line for years to come under the best of circumstances, and will continue to decline in the face of another European and global recession.

Accordingly, there is no relief in sight for its towering leverage ratios in all sectors—government, households and business. In these circumstances, a 4% sovereign debt yield is nothing short of absurd.

The truth of the matter is therefore quite simply. Draghi ignited a short-term buying stampede with his mid-2012 pronouncement. This caused a hot money inflow—especially from dollar based Wall Street speculators and hedge funds. It certainly helped that the latter were drowning in liquidity owing to the Fed’s $85 billion per month of QE purchases and the ready availability of essentially zero cost repo financing. Indeed, the combination of QE3 and Draghi’s “whatever it takes” amounted to a bugle call to the financial hounds.

In short order, the impact was to drive both Euro bond prices and the Euro/USD exchange rate dramatically higher. In fact, between July 2012 and spring 2014, the euro rocketed from 120 to 140 or by nearly 17 percent. Not only did the resulting combo of a rising euro and soaring peripheral bond prices result in a tsunami of hot money into the euro markets, but it also laid the planking for today’s pathetic excuse that Europe is suffering from an economic affliction that can only be solved with an even more fantastic increase in ECB monetary intervention—-even beyond the financial repression it has in place today including negative deposit rates.

But there is no structural deflation in Europe—just the short-term impact on the rate of price change owing to a spike in the exchange rate that, ironically, resulted from Draghi’s pledge that he would run the printing press at some future date at whatever speed might be necessary to “save” the euro and prop up the sovereign debt of the EC periphery.

In truth, the current “deflationary” scare will soon abate as the euro moves through the 130 mark, and dollar-based speculators are forced to sell their peripheral bonds in order to avoid losses. The trend level of euro area inflation has been, and will remain, in the order of 2.2% per annum since 2000 as shown below. Other than the short-run exchange rate effects on the  rate of price change, the idea that Europe is suffering a deflationary crisis is absurd.

Accordingly, bond yields everywhere throughout the euro area are distorted beyond recognition.  In a recent post, EconMatters laid this out quite explicitly.  The data for all of the major European countries shown below truly describe the mother of all bond bubbles. This is central bank destruction at work on a monumental scale.