Accordingly, the Fed is pre-occupied with utterly transient and frequently revised-away monthly release data on retail sales, housing starts, auto production, business investment, employment, inflation and the like. But its always about the latest ticks in the data - never about the larger patterns and the deeper longer-term trends.

And of course that’s the essence of the Keynesian affliction. The denizens of the Eccles Building - -overwhelmingly academics and policy apparatchiks - -rarely venture into the blooming, buzzing messiness of the real economic world. They simplistically believe, therefore, that the US economy is just a giant bathtub that must the filled to the brim with “aggregate demand” and all will be well.

Filling the economic bathtub is accomplished through something called “monetary accommodation”, which essentially means credit expansion. That is, market capitalism left to its own devices is held to have an inherently suicidal tendency toward depression - or at least chronic recessions and underperformance. As the Keynesians have it, households and businesses almost always spend too little and therefore need to be induced to become more exuberant in the shopping aisles and on the factory floor.

In this framework, the blunt instrument of artificially depressed interest rates is the natural policy tool of choice. If cautious households are saving too much for a rainy day or even their children’s education or their own retirement - - why then club them with ZIPR (zero interest rates). Get them shopping until they drop. Likewise, if businessmen are too benighted to see the case for opening another store or buying a new lift truck for their warehouse (or expanding same), bribe them with cheap debt financing.

In short, the primary route of  monetary policy transmission for Keynesian central bankers is the credit expansion channel. Using that economic plumbing system they endeavor to goose aggregate demand and thereby fill the economic bathtub to its brim - otherwise known as potential output and full employment. Furthermore, by a Keynesian axiom - -the Phillips Curve trade-off between inflation and employment - there is no possibility of serious goods and services inflation until the tub is full and all capital and labor resources are fully employed.

So the whole gig amounts to a simple plumbing procedure: Keep pumping aggregate demand through the credit channel until potential GDP is fully realized because, ipso facto, that means that the Fed’s Humphrey-Hawkins mandates of price stability and maximum employment have also been achieved.  At the end of the day, therefore, the Fed heads watch the ticks and blips of the “in-coming data” with such ferocious but misguided intensity because they believe their job will be done when the US economy finally reaches its brim. Just there; no more, no less.

This entire Keynesian bathtub model is nonsense, of course, not the least because the US economy is not a closed system, but functions in a rambunctious, open global economy. In that setting, massive flows of trade, investment and finance impinge heavily on prices, costs, wages and productive asset returns, and therefore the daily behavior of millions of domestic workers, businessmen, investors and financial intermediaries. Accordingly, if domestic costs and wages are too high relative to the global competition, the Fed can create “aggregate demand” to its heart’s delight, but the added borrowing and spending will leak off into incremental imports, not added domestic production and jobs.

So the Fed’s Keynesian model is fundamentally flawed - a reality that perhaps explains its stubborn adherence to policies that do not achieve their stated macro-economic objectives, but simply fuel serial financial bubbles instead. And it also explains its inability to recognize or acknowledge either untoward effect.

However, even apart from the fundamental flaws of its basic economic model, the Fed’s Keynesian pre-occupation with the economy’s mythical full-employment brim (and the short-run business cyclical fluctuations related to it) causes our monetary central planners to ignore the obvious. Namely, that the credit transmission channel is broken and done, and that the massive resort to money printing - especially since the dotcom bust in 2000 - hasn’t worked at all. In fact, massive monetary stimulus has been accompanied by sharply deteriorating economic trends.

Stated differently, the growth rate and general health of the US economy has drastically down-shifted during the last decade and one-half and now stands at only a fraction of its historic trends.  Specifically, real GDP grew at a 4.0% rate during the golden age of sound money and fiscal rectitude between 1950 and 1970.

Then it dropped to about 3% during the next 30 years after Nixon defaulted on our Bretton Woods obligation to redeem the dollar in a constant weight of gold. This was an epochal move that permitted the world’s leading central bank to launch its one-time ratchet of the US economy’s leverage ratio, raising it from 1.5X national income before 1970 to 3.5X  shortly after the turn of the century. The consequence was to allow the US economy to generate about $30 trillion of public and private debt beyond what would have been the case under the 100-year trend ratio that prevailed prior to 1971. This amounted to an incremental dollop of spending beyond that available from current production and income that temporarily juiced economic growth as measured by the Keynesian GDP accounts,

But since the dotcom bust in 2000 - - when the Greenspan Fed finally went all out with printing press monetary expansion - -real GDP growth has amounted to only 1.7% annually.  That is just 40% of its golden age rate, and in truth probably even less if inflation were to be honestly measured by the government’s statistical mills.

Faltering growth, in turn, has meant severe job market deterioration and declining investment in productive assets. Indeed, during the last 14 years of its intense economic weather watching and money printing, the Fed has never once noticed that breadwinner jobs have declined by 5%, real net investment in business plant and equipment is down by 20% and the median household income is not only sharply lower, but actually only at levels first achieved in 1989. 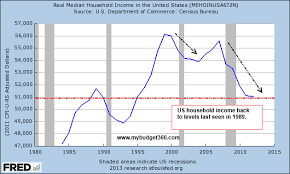 Needless to say, these failing trends in the fundamental measures of macroeconomic health occurred at a time when the Fed’s balance sheet virtually exploded, rising from $500 billion to nearly $4.5 trillion - or by 9X - during the same 14 year period. Yet it keeps attempting to shove credit into the economy notwithstanding this self-evident failure because at the end of the day there is nothing else in its playbook.

So we have reached peak debt in both the household and business sectors. That means the fed’s massive flood of liquidity never gets out of the canyons of Wall Street, yet it nevertheless keeps the spigot wide open, and promises to do so for 80 months running at least thru mid-year 2015.

In short, believing they are filling the macroeconomic bathtub with aggregate demand and full-employment jobs, Janet Yellen and her merry band of Keynesian money printers are simply blowing chronic, giant, dangerous bubbles on Wall Street. If they are beginning to become fearful of a Wall Street hissy fit, perhaps they should look at the two charts below. 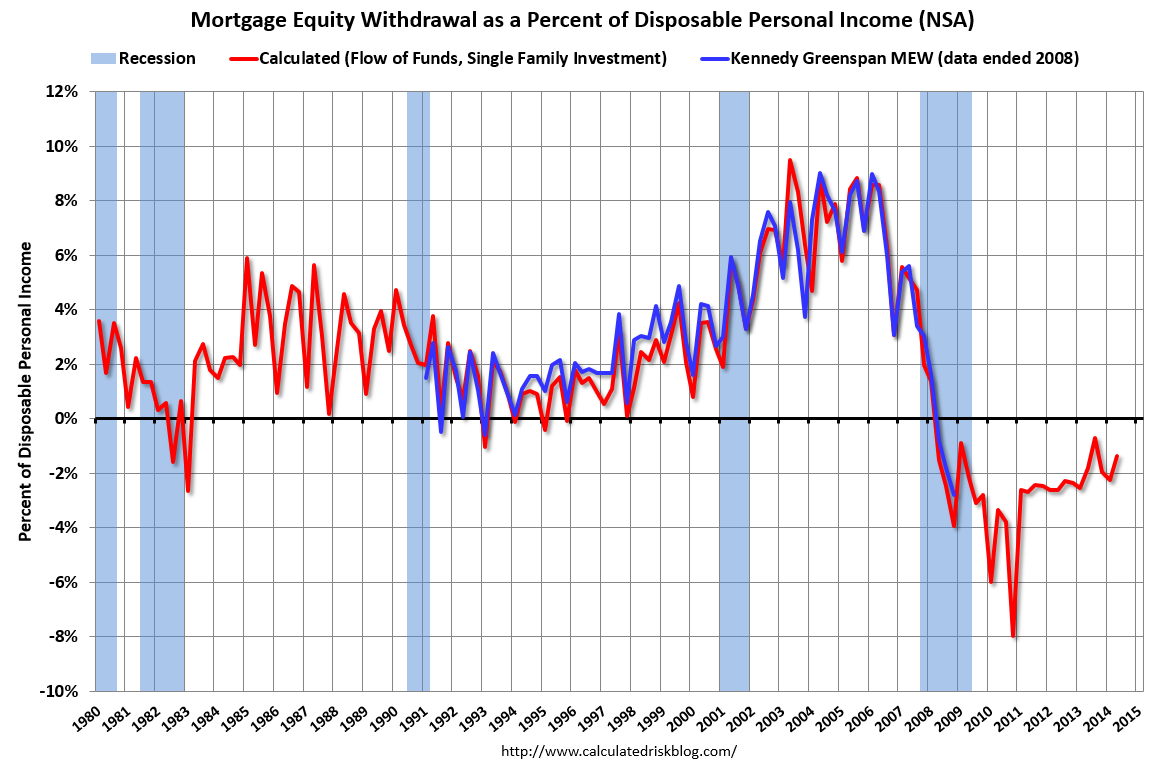 Easy money is always the wrong medicine, but most especially for an economy that is already and self-evidently saturated with too much debt. In particular, the inflated and unsustainable growth that the Greenspan Fed engineered by encouraging main street households to stage a massive raid on their home ATM machines has sharply reversed, and properly so.

And this is no small number. Compared to the peak MEW (mortgage equity withdrawal) rate of 8% of disposal income, today’s negative 2% rate means there has been an approximate $1 trillion swing in household “spending”.  Our Keynesian central bankers lament this as a loss of “aggregate demand” that they intend to remedy by printing more money. In truth, this was always phony demand that could not be sustained and had not been earned through production; its disappearance, therefore, marks the fact that households have been forced back to the old fashion virtue of “living within their means”.

Stated differently, the supply side is back in charge after a 30 year spree of one-time debt and leverage expansion. Consumer spending now depends on income - which means production, investment and enterprise are once again the source of growth, jobs and true national wealth.

The implication of all of this, of course,is that our monetary politburo is out of business; that “monetary accommodation” is nothing more than a one time parlor trick of central bankers. Unfortunately, like the real politburo in the Kremlin, the incumbents in the Eccles Building will not desist until they are finally chased from office by a massive uprising of the people - –that is, the savers, workers and entrepreneurs of America who have been shafted by the bubble finance policies of our monetary central planners.