Foxconn workers are striking again—this time in Chongqing. But you have to look at the map to see why this is an event of extraordinary significance. In a word, these strikes mean that the rice paddies of China have been nearly drained of cheap, docile labor. Yes, there is an extensive geography west of Chongqing, but here’s what it mostly consists of: mountains, as in the massive Plateau of Tibet; arid lands, culminating in the forbidding expanse of the Gobi Desert; and the factory-less rain forests of southwest China.

In short, there are few rice paddies west of Chongqing to drain because no one lives there. And this means the closing of the world’s cheap labor frontier is at hand.

Indeed, it had been approaching for several years now as Chinese manufacturers desperately migrated westward, attempting to perpetuate a regime of ultra-cheap factory labor. This perverse arrangement is virtually symbolized by Foxconn’s million plus workers in sweatshops throughout China—-factories which keep the likes of Apple, HPQ, Sony, Samsung and all the rest, as well as their American and European customers, in cheap gadgets, cheap electronics and cheap computers. But economically speaking, China’s cheap labor frontier has now it reached its Pacific Ocean equivalent.

So unless Mars is inhabited after all, the last two decades constituted a unique and non-replicable confluence. Accordingly, having used up its reservoir of cheap pre-industrial labor, the world economy is about ready to enter a wholly different era—-one when the massive central bank balance sheet expansion of recent years functions to crush global corporate profits, not just DM factory labor.

Folks, this is how Greenspan, Bernanke, Shirakawa, Trichet, King, Draghi and all the other central bank magicians did it. While they spent years breast-beating about their success in quelling inflation and generating enormous financial wealth effects, while intermittently fretting about “deflation”, their red hot printing presses were generating an altogether more insidious impact deeper down the economic strata.

In the developed world, they fueled household credit binges that were unprecedented. But owing to the vast mobilization of ultra-cheap labor in China and elsewhere in the EM, this credit fueled demand for sneakers, sweaters, furniture, fabrics, flat-screen TVs, computers, tablets, smartphones and the rest of the i-Gadgets did not drive up domestic prices; it was diverted to the booming export factories of east China, Bangladesh etc.

In the developing world markets (DM), on the other hand, the central bank money printers fueled a tsunami of cheap capital, thereby enabling an explosion of factory and infrastructure building and machinery and equipment acquisition. This drastically uneconomic investment boom was financed by yield hungry capital flows from New York, London and Tokyo—abetted by mercantilist currency pegging policies of the People’s Printing Press in China and other EM central banks. After all, the $4 trillion of reserves sitting in the vaults of China’s central bank were not gathered by old fashioned 19th century bankers stocking monetary acorns for a rainy day.

That’s how China’s credit market debt outstanding soared from $1 trillion in the year 2000 to $25 trillion at present. And it meant that anything in the realm of manufacturing, mining, international shipping and domestic transportation and infrastructure which could be built was built. That was the consequence of endless cheap capital flowing in from global bond markets and domestic banking systems.

Needless to say, the households of Europe and America have at length reached “peak debt”. Spain had a mortgage borrowing binge, for example, that even put Los Vegas and Phoenix to shame. But now the day of reckoning has arrived. Even as the Fed and ECB keep pumping liquidity into the financial markets, they fail to notice that they are not inflating consumer borrowing, just financial asset prices. This means that the world’s ballooning capacity to produce and transport “things and stuff” can no longer be supported by exuberant, credit-fueled household spending from the developed world markets (DM). As China’s building boom comes to an end, for example, it finds itself choking on vast excess capacity to produce rebar for high rises, plate steel for ships and concrete for building highways, bridges, office buildings, factories, warehouses and practically everything else.

Indeed, with more than 2 billion tons of annual production capacity, China’s cement industry is 25X the size of its US counterpart. During 2012 and 2013, in fact, it produced more cement than did the US during the entire 20th century.

But the vast excess industrial capacity of China is only part of the central banks’ handiwork. In generating artificially cheap capital financed by fiat credit, not honest private savings from earned incomes, they also enabled the mining and shipping industries to become equally bloated. Yet the imbalances only worsen as the momentum of prior CapEx completions adds to supply—- even as demand falters.

This year will see nearly record expansion of global iron ore production capacity, for example, just as China’s stock piles soar and new orders plummet. Not surprisingly, iron ore prices have been in free fall since early 2014, and at about $80 per ton today they are already down by 60% from the $200/ton peak of 2012.

And this is not just a problem for iron ore commodity speculators or punters in the mining stocks. Instead, mining CapEx is in the process of taking an staggering plunge. The big three miners—-BHP, Rio Tinto and Vale—collectively spent $60 billion in CapEx during the peak year of 2012. That figure is already down to a run rate of $30 billion and will doubtless plunge to $20 billion or even lower as the cycle plays out.

This means, in turn, that CapEx suppliers like Caterpillar and Joy Global will also hit the skids. So will the German machinery and engineering suppliers like Siemens, as China’s orders for factory equipment, high rise elevators, locomotives, and power generating equipment also subside. And then the shrinkage will travel further up the food chain—–hitting high paid labor in the capital goods industries and the out-sourced vendors who supply, maintain and often mange these plants.

Meanwhile, the middle and lower income households throughout the DMs were being wrangled into debt servitude.

And now monumental excess industrial capacity will cause savage price-cutting as competitors scramble to generate enough volume and cash flow to cover the huge fixed costs and bloated balance sheets that attended the global investment boom.  The obvious victim will be profit margins throughout the world’s resource extraction and industrial production food chain.

So Chongqing may be far away and hard to pronounce. But the workers striking there are actually marking a crucial inflection point. It is one that denotes the world’s central banks have painted themselves into a corner and that the global economic and financial game of the last two decades is about to change. Big time.

Electronics company Foxconn’s offices in Tuchung, Taiwan, in June. The company said about 1,000 employees walked off the job at a plant in Chongqing, China, for several hours this week. Agence France-Presse/Getty Images

About 1,000 workers at a Foxconn plant in southwest China assembling printers and computers for companies includingwent on strike for several hours this week demanding higher pay. 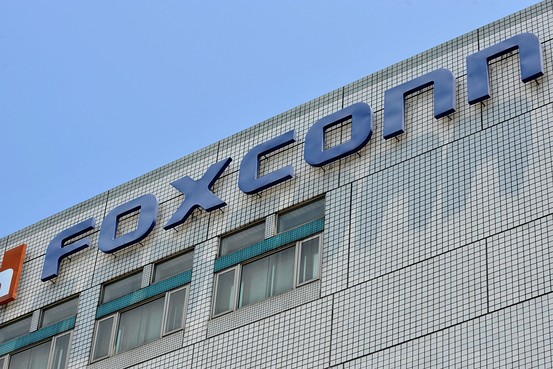 The Taiwan-based company, formally known as Hon Hai Precision Industry Co.  said the workers walked off the job for four hours Wednesday at its production site in Chongqing. About 20 workers went on strike Thursday morning but further details on that stoppage weren’t available.

Foxconn is working with its labor union and workers to resolve the dispute, the company said Thursday in a statement. The company said the strikes didn’t disrupt production.

Management “continuously increased production volumes, and even required individual workers to take on tasks that used to require two workers to handle. The increase in workload wasn’t compensated,” said one worker who declined to be named. He said he participated in the strike.

“Some workers are not happy because the company (Foxconn) has reduced overtime hours, a key component of their salaries,” after H-P cut orders, said a Foxconn official who declined to be named. Workers also demanded the resignation of the factory manager, he said. Also, the company had tried to lay off some workers without paying severance, the official added.

Foxconn filed a complaint with the local police, he said. The reason for the complaint wasn’t clear.

On the Weibo social-media service, users distributed images that appeared show hundreds of workers gathered outside the Chongqing facility Wednesday, waving protest banners as police officers looked on. The police presence at the factory continued Thursday, according to the worker.