Nearly two decades of central bank financial repression have created huge distortions and imbalances in the world economy. Now they are coming home to roost as the impossibility of ZIRP forever dawns on even our mad money printers. Having created yet another round of ebullient financial bubbles, they are now getting palpably nervous.

Even the lady with the perpetual tan and unfailing call for “moar” monetary and fiscal stimulus, IMF head Christine Lagarde, said something sensible over the weekend:

“There is too little economic risk-taking, and too much financial risk-taking.”

She got the “too much financial risk-taking” part right, but here’s the thing. The apparatus of state policy—-fiscal borrowing and central bank money printing—-can not cause enterprise to flourish. Free market capitalism is the milieu in which business enterprise, invention, risk-taking and labor productivity thrive best. So, yes, reducing market impairments—such as tax rates on production and capital which are too high or regulations, protectionist laws and subsidies which are too onerous—-is always helpful.

These latter steps are now coming into fashion under the heading “structural reform” and they make sense as far as they go. But central bankers like Draghi and international monetary bureaucrats like Lagarde pushing this agenda fail to recognize that their own policies on the fiscal and monetary side currently dwarf the ill-effects of, for instance, over-zealous EPA regulation in the US or protectionist labor laws in Europe.

In fact, long-standing financial repression and absurdly low interest rates have generated malinvestments and debt burdens that are crushing enterprise and true economic risk-taking throughout the world economy. In the DM (developed market economies), the resulting malady is consumer balance sheets that are bloated with debt; and in the EM (emerging markets) the ill takes the form of vastly bloated industrial capacity and public infrastructure. So if there were ever a case of “physician, heal thyself”, this is it.

Indeed, the current spectacle of Europe’s monetary arsonist, Mario Draghi, telling Italy’s most recently installed double-talking politician, Prime Minister Renzi, to change the nation’s labor laws so that employers can more easily fire redundant workers says it all. Of course this should be done—Italy can’t thrive in a global economy based on 1960s communist union theories that were invalidated the moment that the comrades in Beijing swapped Mao’s little red book for the printing presses of red capitalism. Still, the redundant labor and resulting economic inefficiency in Italy’s few remaining large-scale industrial plants is trivial compared to the burden of nearly $3 trillion of public debt—a figure that amounts to 130% of GDP and continues to mount.

By his ill-considered and undeliverable pledge to do “whatever it takes”, and the phony peripheral bond rally it elicited, Draghi has destroyed any semblance of political will in Italy to tackle its 130% of GDP public debt. Instead, based on the blatant scheming now underway in Italy’s parliament, it is already evident that the “labor reform” that Renzi is talking up amounts to statutory legerdemain that will make almost no difference in the domestic jobs market for years to come. Yet, it will provide the pretext for a return to out-and-out fiscal profligacy in Italy next year—-as Italy’s politicians are already making evident in an openly public manner.

So what’s going on is Keynesian central bankers are looking for a scapegoat, and have found exactly the right word cloud to define it—-that is, “structural reform”.  And the politicians are grabbing the bait, knowing that infinitely malleable enabling acts can be made to sound constructive upon parliamentary approval, even as they permit real policy change to be buried in regulatory wrangling and judicial review for years to come.

At the same time, the politicians’ pound of flesh in this emerging scam is more pork barrel spending and fiscal stimulus in the guise of “public investment”. But the litmus test on that proposition is quite simple: Are the proposed public “investment” projects being funded with higher user fees and taxes or general government borrowing?

It goes without saying that it is the latter. Yet with DM governments at peak public debt ratios nearly everywhere (i.e. 100% of GDP and higher), borrowing even more money to fund public projects which for the most part are not needed, and will not contribute to improved economic efficiency, is a little more than a recipe for higher taxes and more economic stagnation down the road.

So the new consensus coming out of this weekend’s IMF meeting is just a smokescreen.  What ails the global economy can not be remedied by toothless “structural reforms” or wasteful “public investments”. What is urgently needed, instead, is an end to central bank financial repression and rapid return to normalized interest rates and budget surpluses that can pay down unsustainable public debt burdens that have built up over the past few decades.

Yes, that would cause the boys & girls and robo-traders on Wall Street to throw one hellacious hissy fit. But there’s no getting around it. Current money pumping policies by the major central banks are just inflating financial bubbles to ever more treacherous heights, guaranteeing that the eventual day of reckoning will be all the more traumatic.

And yet the central bankers are reluctant to allow interest rates to escape from the zero bound and begin their flight upward toward “normalization” because they are wedded to the Keynesian fallacy that a weak economy is evidence of insufficient “aggregate demand”. Therefore, monetary “accommodation”—even when it reaches the lunatic extent of recent years— is purportedly needed to goose households and businesses into more spending.

In the DM world, however, the credit transmission channel of monetary policy is broken and done.  Real interest rates for maturities up to five years have been negative in real terms for most of this century. Not surprisingly, main street households have smothered themselves in debt, and have thereby, ironically, reduced the efficacy of Keynesian stimulus policies practically to zero.

The reason is that during the decades after the demise of Bretton Woods in 1971, public and private balance sheets were consistently and drastically levered-up on a one-time basis. The resulting credit-fueled consumption binge in DM economies added to measured GDP, but not to true, sustainable wealth gains. It was a one-time parlor trick that has now left them with contractually fixed public and private debts ranging from 350-500% of GDP—– off-set by stagnant incomes and unsustainable mark-to-market asset values that are vastly inflated by the long years of bubble finance.

So the DM world has now reached the limits of “peak debt”, even with the ZIRP enabled ultra-low “carry” cost on these towering obligations. In this regard, the US and Spanish ratio patterns are typical. But in either case, Keynesian monetary stimulus is simply pushing on a string, as is reflected by slowly falling debt ratios since the 2007-2008 peak.

Stated differently, there has been no escape velocity owing to Keynesian stimulus. Massive central bank liquidity injections have remained in the canyons of Wall Street and other major financial markets where they have enabled endless free money funding of speculation and carry trades, but have contributed virtually nothing to spending by debt-saturated main street households. At the same time, central bank financial repression has made capital inordinately cheap and has thereby caused fantastic over-investment in the EM world. The current disastrous overcapacity in China’s steel industry is a case in point.  Between the year 2000 and 2010 its steel industry grew from 150 million tons of annual capacity to 750 million tons—a rate of heavy industry growth never before witnessed anywhere.

Yet as shown below, the flood of cheap money from the Peoples’ Printing Press of China in response to the Great Recession only stimulated a further round of even more fantastic steel capacity growth.

The 300 million tons or 40% gain since 2010 is a striking measure of the current global derangement. China’s steel capacity expansion in just the last four years exceeds the combined capacity of the entire steel industry of Europe and North America combined. Yet China’s sustainable domestic need is arguably less than 500 million tons per year—once its spree of constructing empty apartment buildings, unpopulated cities, redundant highways, bridges, airports and high speed railroads and unneeded industrial capacity comes to an end—as it surely must and will. Even the comrades in Beijing are signaling a resignation to that unavoidable outcome.

Already, the inevitable collapse is becoming visible. Prices are plunging, inventories are soaring, and profits in the steel industry have virtually disappeared. As detailed in the attached story from Bloomberg, the inexorable consequence will be a flood of cheap exports on the world market.

Indeed, the real problem is that once this immense capacity was brought into being, it was not going to go quietly into the night. China’s true excess capacity now amounts to upwards of 50% of steel production in the rest of the world. Consequently, when China’s domestic consumption is sharply curtailed as the world’s greatest historical building boom winds down, the flow of excess plate and sheet and rebar and structural products into the world steel markets will have a relentless shocking impact. Prices and profits will be crushed everywhere; and protectionist policies not seen since the 1930s are likely to be kindled.

After all, it only need be recalled that 85% of all the growth in global steel production since the year 2000 has been attributable to China. In the rest of the world, steel production during the last 14 years has barely inched forward—growing at just 1.1% per annum owing to a tepid level of end demand. So when the flood of dumped still comes flooding in from China, it is evident that the absorption capacity is next to zero.

And steel is just the most advanced case. A huge wave of industrial deflation is virtually guaranteed in the food chain of materials extraction, production and fabrication. 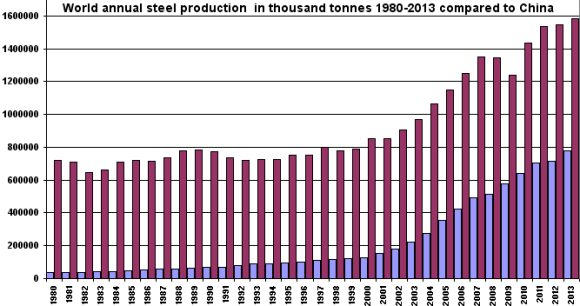 Today’s Bloomberg story on China’s growing steel industry crisis notes that “China steel now as cheap as cabbage.” Perhaps that is a foretaste of things to come!

In any event, the stunning collapse of steel prices and the soaring inventories of iron ore in China are a reminder that cheap capital artificially provisioned by central banks can lead to an enormous boom of malinvestment. But ultimately the laws of economics will out and a relentless deflationary correction ensues.

It would appear that the global steel industry, among others, is soon to find out about the crack-up part which inexorably follows the boom.