While Putin was busy laying the groundwork for another major commodity gas pipeline expansion project, one that would make China the largest natural gas client of Gazprom, surpassing Europe and fully concluding Russia's pivot from west to east, US president Obama had slightly less lofty ambitions out of the annual APEC summit in Beijing: coordinating with China's leader Xi Jinping on how to best avoid war, or as the WSJ phrased it "military confrontations." So in order to prevent military conflict in the coming years, China and the US have penned two deals.

As the WSJ reports, "one of the military agreements covers a mechanism for notifying each other of major activities, such as military exercises, and the other sets rules of behavior for encounters at sea and in the air, according to people familiar with the negotiations."

So an early warning system: which is useful considering China's recent announcement of an Air Defense Identification Zone (ADIZ) erected over the East China Sea, and which clearly targeted Japan in the aftermath of the Senkaku island land-grab escalation, especially since a year ago China declared it is "Willing To Engage In A Protracted Confrontation" With Japan As "Prime Target." And since it is unlikely that China will be conducting any major military exercises off the coast of California any time soon (or so one hopes), this is basically yet another veiled threat to the US that any developments in what China clearly has defined as its national interest area, even if it overlaps with that of America's prime ally Japan, will be frowned upon.

What is left unsaid is what happens if the US does conduct military drills in the region without a prior warning, and whether this "arrangement" may have made actual military confrontation more likely.

This happens a day after Obama announced that the two governments had resolved lingering differences on a deal to drop tariffs on semiconductors and other information-technology products, which backers say could cover $1 trillion in trade. Once again, what was unsaid is how the US will assure China that any future trade will be NSA-inside free. Recall what happened to CSCO earnings almost exactly one year ago in the aftermath of the Snowden revelations, all thanks to a complete collapse in Chinese orders.

The other agreement that will supposedly prevent war between the US and China is climate change, as well as business visas.

Climate change is another area the two leaders are expected to reach agreement on Wednesday. And Monday, each side announced new, longer-term visas for business and education to facilitate travel and commerce.

The story of how the marginalized "leader of the free world" ended up here is well known.

According to the WSJ, "Relations have foundered over the past year on cyberspying, democracy demonstrations in the Chinese territory of Hong Kong and China’s rough-elbowed approach to territorial disputes with Japan and the Philippines, both U.S. allies. Discord between Messrs. Xi and Obama was also apparent at the Asia-Pacific Economic Cooperation summit, during which they championed rival free-trade pacts."

What really is happening is the US is rapidly losing its superpower status, with first China, then Russia, the other BRIC nations, unafraid and willing to confront DC, and since retaliatory "costs" end up hurting US allies more than the adversary, it creates a closed loop where the US loses incremental leverage and clout with every passing day, even as former Cold War, and not only, foes become further emboldened.

Of course, this won't be the first time the two leaders have tried to mend relations:

But both men appear eager to recalibrate the relationship that has largely failed to match the promise of their first summit 16 months ago at the Sunnylands estate in California, when they tried to establish a personal rapport with an informal shirt-sleeves meeting.

Ah yes, who can forget the "straight-to-teleprompter" president getting to work and rolling up his sleeves. Alas, this attempt to mend relations too will fail, as always happens when two superpowers, one ascendent and one declining, are about to see their relative power status intersect.

So instead, the White House is hoping that by openly admitting military conflict is possible it will stave off the inevitable.

White House officials declined to provide details of the military agreements to be discussed Wednesday. Ben Rhodes, a deputy national security adviser, said the two sides had been discussing ways to address instances where U.S. and Chinese military assets “came a little too close for comfort.”

“It’s incredibly important that we avoid inadvertent escalation and that we don’t find ourselves again having an accidental circumstance lead into something that could precipitate a conflict,” he said.

China’s defense ministry didn't respond directly when asked for details about the two agreements. Its press office said that the mechanism for notification of military activities and the rules of behavior would have “important effects and significance for promoting China-U.S. strategic trust and building a new type of military relationship.”

What China means is that in the future, any time US aircraft carriers are located in the East China Sea, whether it is en route to Japan or checking up on Taiwan, they better have permission.

As for whether and how long the "military confrontation" between the US and China has been delayed, there is substantial time left under Obama's reign for this hypothesis to be thoroughly tested. 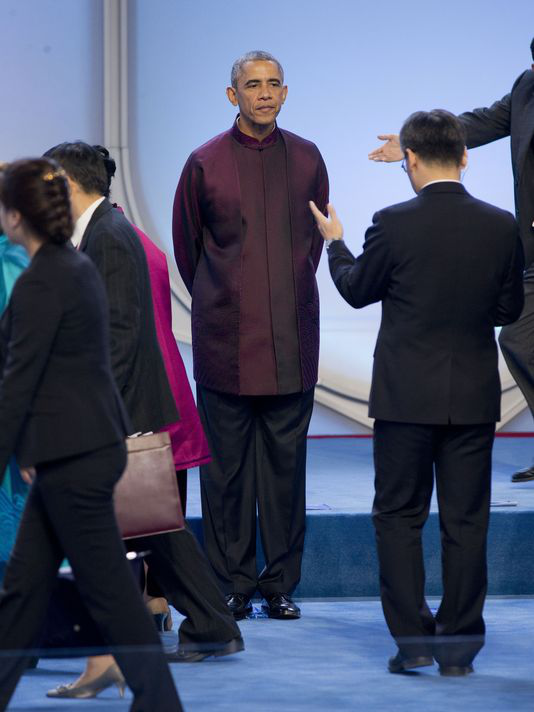